The LA Times has a list of the hottest IPOs of the tech bubble. I am old enough to have forgotten most of these. The party on listing makes Linked In's debut look modest.

Some of these stock-stags were plain silly (TheGlobe.com) which (miraculously) is still quoted (at 1c per share) on the OTCBB.

One stands out as a genuine success story and a core part of modern internet technology - that is Akamai. However it is - despite considerable success - still trading well under the first day pop in the stock (though above the IPO price which makes it a real success story from the tech wreck).

The standout - the all time biggest IPO pop - is VA Linux - which has since been renamed "Geeknet". Its a real business: I use their products and even have positive feelings towards the company. Their stock chart however leaves something to be desired. 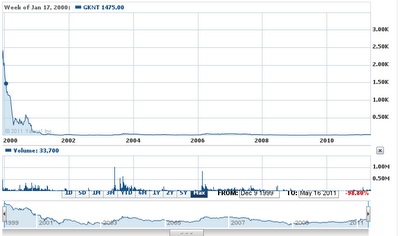 This stock rose 698 percent on the first day. Linked In is nowhere close (so maybe Facebook comes on with a market cap of $450 billion).

As a fund manager my guess is the best way to play this trend is to ignore it. Best to look where people are not looking. Everyone and their dog is looking at social media.

And socially so am I. I am off to open a Facebook account for my dog. Wonder if Lou Reed will "friend" him?

Just for kicks have a detailed look at the charts.  VA Linux/Geeknet is trading roughly at its 2002 low. The Globe.Com had no comeback and Akamai is a fifty bagger from the lows.  The real opportunities are during the crunch. But even if you picked Akamai as the winner out of these you probably purchased at at $5, $3 and $2 and buying at at 71c would not have happened. And you would have looked and felt like a sick puppy as you watched your quoted wealth evaporate.
Posted by John Hempton at 11:29 AM

Context is important here. One big reason for Akamai trading so low at that time is that the founder was in one of the 9/11 planes ... creating all sorts of uncertainty about the company's future.

So, uh... in a few months we should start looking at Chinese microcaps? :)

Which is the better short: the hot IPOs or the frauds?

But I suspect Linked In is early not late in the cycle. Time will tell on that.

My view: no position.

I was involved in the Linux scene when whole VA Linux thing was going down--in fact I had been to a few SVLUG events and Larry Augustin, the CEO of VA Linux, helped install my Linux bootloader. Lots of the other guys in SVLUG were involved with VA Linux's founding, too; Rick Moen, Chris DiBona, etc. I was at Linuxworld when VA IPO'd and a bunch of nerds walking around the conference room floor were now paper millionaires. Everyone thought Red Hat was going to destroy MSFT's market. Good times, good times...