I went to a free concert on the Opera House steps on the weekend.  The billing was very strange: Laurie Anderson (and possibly her partner Lou Reed) were giving a concert on the opera house steps for dogs.  Thousands of dogs.  It was billed as inaudible to the owners – and I could not tell whether Lou Reed was having us on.  After Lou Reed brushed off the Metal Machine Trio for an impressively loud show in the concert hall (earplugs supplied) – and he was going from something you could not listen to to something you could not hear.
I was pleasantly surprised. Dogs and family loved it.  Lou Reed did not appear but milled around the audience allowing this ridiculous photo of your blogger and his designer mongrel: 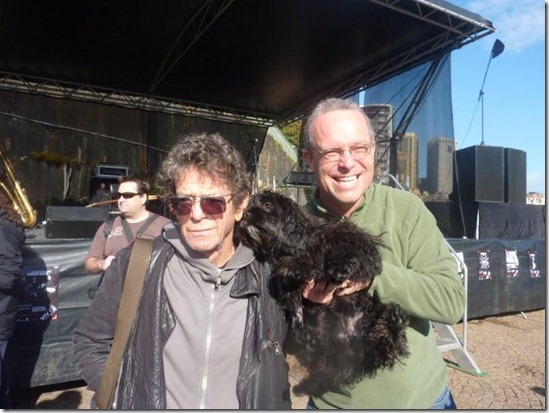 Lets call it a Walk on the Wild Side.
Seriously though – how could I resist a connection – any connection – with the Velvet Underground and one of my favorite albums.
Posted by John Hempton at 11:35 AM

Could you identify the mutt versus the blogger. It's hard to differentiate.

Lou Reed has been having us on for decades. As his music is absolute pure horse.

Is this a caption competition?

Lou Reed also made a cameo performance alongside the Blind Boys of Alabama in the Opera House. Fantastic performance.

Not your best post ever, but your COOLEST post ever. Hats off to Mr. Hempton. Here is one of my favorite Lou Reed performances. I guess the title is "Small Town", he even manages a Truman Capote reference in the lyrics.
http://www.youtube.com/watch?v=n6dq24DLNO8