Watch what the Chinese do

When China (officially) had 19 deaths they started building massive field hospitals. Believe what you see (the hospitals) but take the 19 deaths as a rather dubious estimate (as per that time).

By contrast when the Chinese Government say COVID-19 is highly controlled in China you can believe them because there are Westerners and Western companies throughout China and what you can see (Shanghai and Chongqing as functional cities) comports with the statements and the actions of the Chinese Government.

My general view: watch what the Chinese Government does - rather than what they say.

This is a story about journalists returning to their home in Beijing before a Government crackdown on foreigners.

You can see the Chinese take COVID-19 very seriously indeed.

We can conclude that

b. The Chinese have proven that a super-hard lockdown lasting seven weeks in affected areas 2.5 weeks in Shanghai etc can work. Their major cities have low virus load and major Western cities have not.

c. The Chinese Government are super-scared of reintroducing it.

I am going to give you a few stylised facts about severe acute respiratory syndrome coronavirus 2 and the data.
First – no matter what you say about the Chinese data – and the Chinese data was full of lies at first – China has controlled the outbreak. Shanghai, Beijing, Chongqing are all functional mega-cities with no obvious health catastrophes.
The virus has been managed to very low infection rates in Singapore and Taiwan. The numbers (completely real) in Korea show a dramatic slowdown in infection.
Korea has not shut restaurants and the like. The place is functioning. But it has had rigorous quarantine of the infected and very widespread testing. It has complete social buy-in.
China tests your temperature when you get on a bus or a train. It tests you when you go into a classroom, it tests you when you enter a building. There is rigorous and enforced quarantine.
But life goes on – and only a few are dying.
In Singapore nobody has died (yet) though I expect a handful to do so before this over. This is sad (especially for the affected families) but it is not a mega-catastrophe.
There is a story in the Financial Times about a town in the middle of the hot-zone in Italy where they have enforced quarantine and tested everyone in the town twice. They have no cases.
The second stylized fact – mortality differs by availability of hospital beds
A.    Coronavirus provided you do not run out of hospital beds probably has a mortality of about 1 percent. In a population that is very old (such as some areas in Italy) the mortality will be higher. In a population that is very young base mortality should be lower. Also co-morbidities such as smoking matter.
B.    If you run out of ICU beds (ventilators/forced oxygen) every incremental person who needs a ventilator dies. This probably takes your mortality to two percent.
C.     Beyond that a lot of people get a pneumonia that would benefit from supplemental oxygen. If you run out of hospital beds many of these people also die. Your mortality edges higher - but the only working case we have is Iran and you can't trust their data. That said a lot of young people require supplementary oxygen and will die. If you are 40 and you think this does not apply to you then you are wrong. Mass infection may kill you. Iran has said that 15 percent of their dead are below 40.
I will put this in an American perspective with a 70 percent strike rate by the end.
Option A: 2 million dead
Option B: 4 million dead
Option C: maybe 6 million dead.
By contrast, Singapore: a handful of dead.
China has demonstrated this virus can be controlled. The town in Italy has demonstrated it can be controlled even where it is rife.
Life goes on in Singapore. Schools are open. Restaurants are open in Korea.
The right policy is not “herd immunity” or even “flattening the curve”. The right policy is to try to eliminate as many cases as possible and to strictly control and test to keep cases to a bare minimum for maybe 18 months while a vaccine is produced.
The alternative is literally millions of people dying completely unnecessarily.
What is required is a very sharp lockdown to get Ro well below one – and put the virus into exponential decay.
When the numbers are low enough – say six weeks – you let the quarantine off – but with Asian style monitoring. Everyone has their temperature measured regularly. Quarantine is rigid and enforced. You hand your phone over if you are infected and your travel routes and your contacts are bureaucratically reconstructed (as is done in Singapore). And we get through.
And in a while the scientists save us with a vaccine.
The economic costs will be much lower. Indeed life in three months will be approximately normal.
The social costs will be much lower.
Every crisis has its underlying source. And you want to throw as much resources (and then some) close to the source. Everything else is peripheral.
The last crisis was a monetary crisis and it had a monetary solution.
This is a virus crisis and it has a virology solution.
Asian Governments are not inherently superior to ours – but they have done a much better job of it than ours. The end death toll in China (probably much higher than stated) will wind up much smaller than the Western death tolls. I do not understand our idiocy.


PS. Longtime followers of this blog will know that I have rarely publicly agreed with Bill Ackman. I do here. This minimises economic and social cost of the virus. I am not sure the stock market bounces hard with a rational policy, only that it minimises the damage.

I regard the current course of English speaking democracies (other than New Zealand) as mass murder by the political elite. I think history will regard it that way too.

Coronavirus is more popular than sex (except in South Africa)

I was wanting a way of judging just how serious the coronavirus outbreak is in Iran. Alas government figures are not to be trusted. And figures from other sources - mostly anti-government blogs and the like - are also not to be trusted (as they have an agenda).

I went for the old fall-back. Google Trends.

Here is the google trends for coronavirus in Iran. It is clearly skyrocketing. 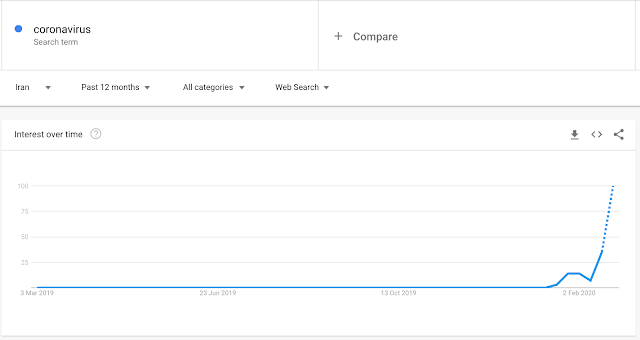 Okay - but this does not help me. I needed something to judge it against.

I figured that it would need to be something that was searched for a lot. So I went for the staple: sex.

Here is coronavirus vs sex in Iran. 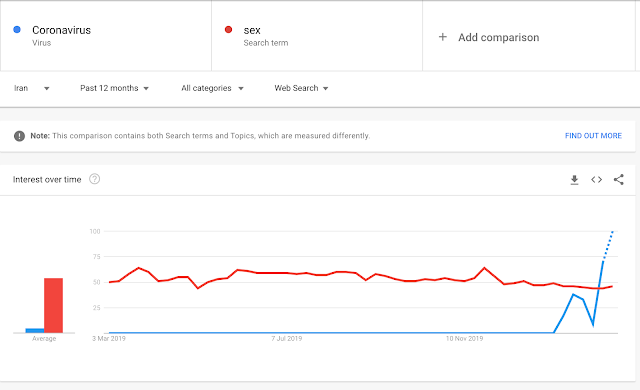 I am beginning to conclude that coronavirus is more popular than sex (at least as a search topic).

So I thought I should benchmark it.

I figured the British are likely to be big searchers of sex. Maybe I am mistaken - but there seems something desperately English-schoolboy about googling "sex".

Yep - coronavirus is more popular than sex in the UK too. 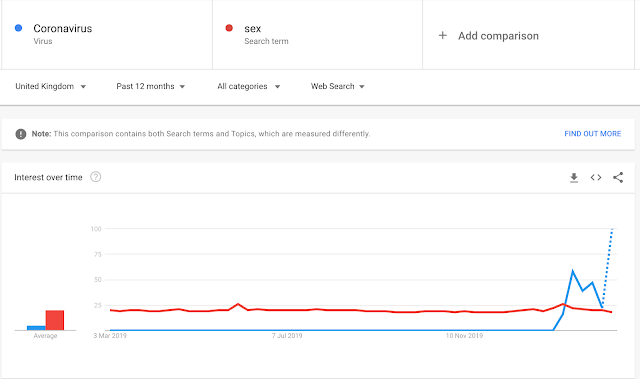 And so it was with almost every jurisdiction I tried. 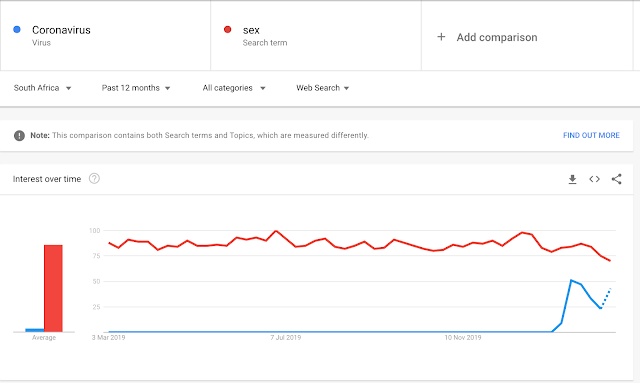 Sex is more popular than coronavirus in South Africa.

Is that because the South Africans are really into sex or that they are not scared of coronavirus?

I have no idea.

Not all research is productive.