Does my butt look fat in this?

Kid Dynamite summed up the case for lululemon athletica inc (always spelled in fashionable lower case) very simply. His sister, and presumably many other women, thought the clothes make their butt look good. I gather this is not original - Howard Lindzon has also turned a few choice phrases in bullish promotion of the stock.

I thought this was crass - but for the life of me I can't think of any better explanation for the stock price.

lululemon athletica it is a remarkable company. The website describes the product (in lower case) as "yoga clothes and running gear for sweaty workouts" and it sells its products in the three fattest nations in the world (USA, Australia and Canada). You would think a specialist yoga and running clothes retailer in those markets would be playing to a limited audience.

But if you thought that you would be wrong.

lulu had sales of $629 million for the nine months ended October 30. This was up about 35 percent from last year. This is a retailer so the fourth quarter matters. Last year they did 245 million in sales in that quarter and this year (at a guess) it will be 35 percent higher - say 331 million. Annual sales will be somewhat shy of a billion dollars.

A billion dollars in sales is a lot of "yoga clothes and running gear for sweaty workouts". Nike by contrast does just over 20 billion in sales but shoes are a much bigger category - and their market is seemingly much wider. After all Nike also makes shoes for yoga and running (and my guess is the shoes should command more gross dollars of margin than the leotards).

A billion dollars in sales is huge for such a narrow category. But even that is small compared to lulu's stock price. You see lulu market cap is now almost $10 billion. The stock is priced at 10 times sales. That is amazing for a fashion company. Nike by comparison has a market cap of $46 billion and a price to sales ratio of just over 2. And Nike is not a thin margin business. No other clothing company comes close.

Here is a chart of Apple's price to sales ratio: 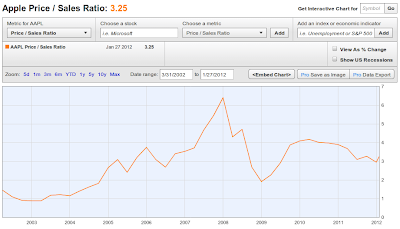 Apple spent most the time at about 1 to 3 times sales (currently just over 3) and never exceeded 7 times sales.

Apple was never as richly valued as lulu lemon athletica.

So I want to play the valuation guessing game.

*  What is the value of the end market for yoga and running clothes. Is it $5 billion per year at which point lulu will be priced like Nike or is it larger or smaller?
*  Can you explain the stock price in any terms other than a play on female vanity? Is Kid Dynamite's explanation of the brand appeal and the stock right?
*  Even as a play on female vanity is it overpriced?
*  What if anything keeps the competition out of yoga clothes?

I would really like to know what any of the big institutional holders are thinking. Maybe their butt looks fantastic but their brain looks a little suspect.

I have no position. Shorting female vanity is not something I have ever done successfully - and I sure as hell would not want to be long this. Besides the entire "it is overpriced" argument applied 50 percent down from here.

Sky People Fruit Juice and the trials of a short seller

Roddy is someone I always read.

If Sky People issue a rebuttal I will - in the interest of fairness - link that as well.

Diversions: Wild is the wind

Just had a fabulously productive day at work (meaning I got a long way towards some money-making ideas).

And for that I am happy enough for now.

So I am indulging in diversions:

The number of problem long investments in my portfolio doubled overnight - from one to two. (We have some small problem longs and some large longs with more minor problems - and some problem shorts but only two largish positions that are doing poorly.)

The treacherous two are the (much discussed) Bank of America long and the (less discussed) Tesco. Bank of America is a bank - therefore highly levered - and therefore total disasters can't ever be discounted. But Tesco is a grocer with a seemingly impregnable position in the UK and some positions elsewhere that may or may not be fine. It is hard to see how you compete with Tesco in its core business - and hence it is pretty hard to see how they get into real trouble. They have debt (driven by the demands of investors during the last cycle to "sweat the balance sheet" but the debt should not be problematic and the repayments are fairly rapid.)

I thought Tesco was my "safe" long. The relatively safety made the position bigger!

On Tesco, I was sceptical of their expansion into the United States. Grocers (indeed retailers in general) have a poor record of crossing borders - there are plenty of cultural differences.

More to the point it is fairly easy to open up in competition in the US - there are vacant big-boxes everywhere and soon to be more - but it is very hard to open up in competition in the built-up cities of the UK. The UK is thus naturally a good business (hard to compete with) and the US less so. [Contra: I guess that is why they open in the US - because they can get sites...]

But when I revealed the position one of my regular correspondents (and obviously smarter than me) admonished me. He thought the American positions would be fine but the UK was going to be problematic - he thought margin declines could be nasty. And that is how it looks right now - the US has very good sales growth - the UK rapidly falling sales growth (a very bad second derivative) and declining margins to boot.

Margins may be the end of this story - but maybe there is something else. After all the competing retailers did well over Christmas - the problems look Tesco specific.

So here is a request for comments. When I was last in the UK (both recent trips) I did not step out of the international city of London. Oxford Street is visibly doing quite well. But the UK is not. My friends with businesses over the UK describe the city as a cocoon in which you can comfortably shop and see no problems with the world. Go to business parks in Edinburgh once built for grand financial institutions and it looks different.

So here is a request - and it is a request for my (relatively few) UK readers outside London. What is going on at Tesco and Sainsbury in places like Leeds or any other major regional city in the UK? Is there a reason why the problems appear Tesco specific? Is Tesco deliberately going down market (they appear to be in recent promotional videos).

My hopeful request to readers is for someone to conduct an "apple freshness test" in a regional city. For this test you buy an apple from each of the local grocers on the same day and leave them on the shelf to see the order in which they rot to the point you would not eat them. Twelve days is generally pretty good - it means the supply chain is fast and efficient. Eight days less so. The grocer that loses the apple freshness test eventually loses the reputation for fresh food and will (inevitably) lose margins and profits. This is something that happens imperceptibly - but women (and they are mostly women in this case) are very good subjective judges of where to shop.

The "apple freshness test" is the core here. The company says that at the "heart" of what they need to do is fresh foods. Fresh foods is only partly about what happens in the store. To be fresh they need to deal with the chain.

Hoping for help from my readers.

It is a small (meaning worthless) consolation that the two stocks on which I am suffering are the ones Warren Buffett has been buying. I am losing money in good company - but they are losses just the same. (Unlike him though I have some winning short-sales...)
Posted by John Hempton at 11:04 AM 75 comments: