There was a very famous conference call once where Highfields Capital analyst Richard Grubman asked for a balance sheet with Enron's earnings statement. Jeff Skilling's response is a key part of the Enron legend.


Grubman: You’re the only financial institution that can’t produce a balance sheet or cash flow statement with their earnings.

Skilling: You…you…you. Well, uh…thank you very much. We appreciate it. Asshole.

The "asshole" quip disappeared from the conference call transcript but everyone remembered it.


Consolidated Balance Sheet and Other Data
(In millions)
5.1 Cash

Lets go back a quarter ago. Here is the balance sheet from the 10Q:

Except that they sold the Aesthetics business during the quarter.

Slide 165 of this presentation (reproduced below) indicates net proceeds of $1240 million.

Net of this they generated only $88 million of cash in the quarter.

Which given they had $2 billion of sales and everyone thinks their cash margin is about 50 percent does not seem to compute. 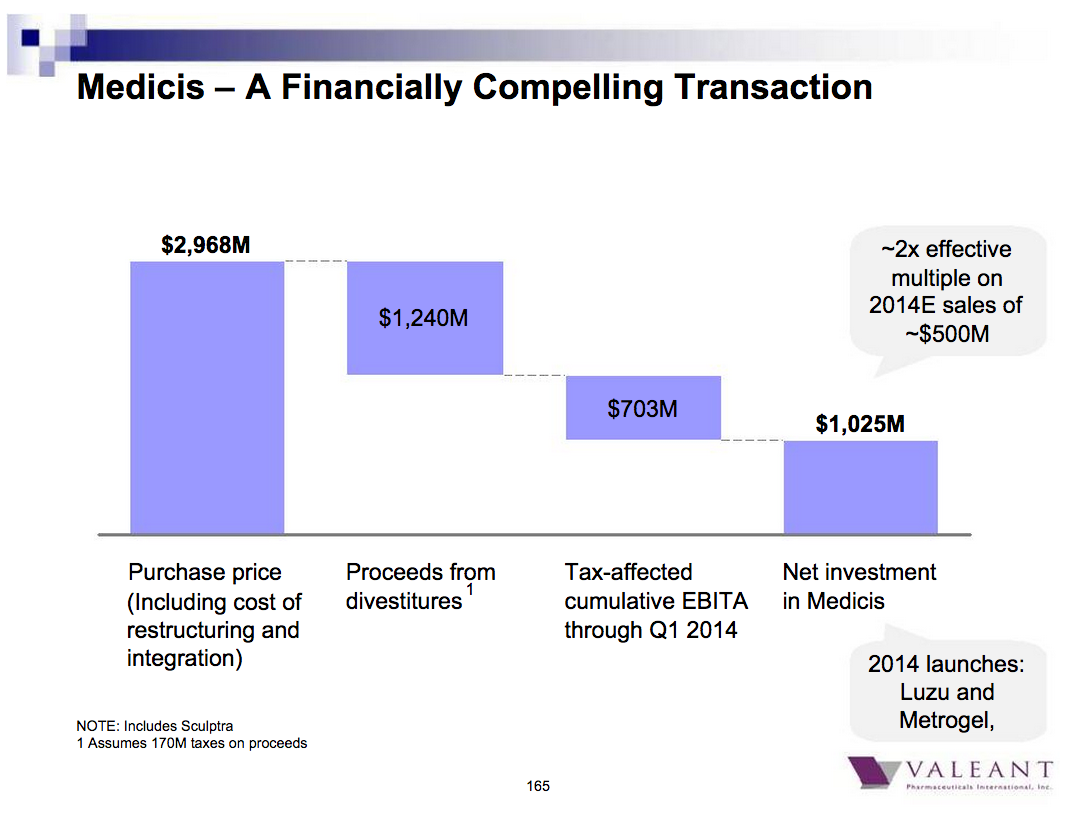 We could of course work it out with a balance sheet and cash flow statement. It is probably all sweet and innocent.

So at the risk of being called an "asshole" please Mr Pearson will you give me a balance sheet and a cash flow statement with your earnings?

Yesterday Nu Skin announced that they had a new loan to replace the old loan. This was essential because the old loan was about to breach its covenants and an event of default would not be a good thing for Nu Skin shareholders or their management.

So prima-facie the new loan was good news.

The stock however dropped almost 10 percent (and was briefly down more).

The loan terms are onerous and complicated and there are some bizarre disclosures in the attachments to the loan document.

The first bizarre thing about the loan is the disclosure as to how much is drawn immediately. Here it is:

This is way more debt than they had at the end of the previous quarter. Here is the balance sheet from the last 10-Q.

Despite this they drew $302 million at moderately high interest rates.

But it is worse than that... the old debt numbers included some debt in Japan and Korea. Some of that is being left in place as per the loan covenant. In quantity:


Indebtedness
That is another $30.5 million of debt.

So now - suddenly - the company has $339.9 million in debt - way more than the $211.4 they used to have. The rise is inexplicable because their last accounts showed net cash.

The company has rapidly - and at what was to them a penal interest rate - borrowed a huge amount of money they didn't seem to need a quarter ago and when they had net cash.

And it can't be for an acquisition because the loan covenants prohibit that.

If you have any good idea what the sink-hole that absorbed this much cash is let me know. However if this cash were needed during the last quarter the whole thing is diabolical. Bluntly if it were needed the company is presumably and somehow massively loss making. I simply do not know how. I am a bear on this stock but that is worse than I would have dared to guess.

(a) the company is secretly massively cash consumptive and we do not know (in which case short) or
(b) the company is drawing a huge amount of debt for which it has no obvious use and which it is prohibited to use for an acquisition [that might include buy-backs as discussed below].

But remember this: Nu Skin drew the revolvers. And it drew them hard. Drawing the revolvers has precedent. It is seldom something that makes credit providers happy. There may be a good explanation (truly). The market has not been provided with it.

The story from yesterday was that the debt covenants involved dividend restrictions. This came from slightly ambiguous wording in the press release.

The Credit Agreement requires the Company to maintain a consolidated leverage ratio not exceeding 2.25 to 1.00 and a consolidated interest coverage ratio of no less than 3.00 to 1.00. The Credit Agreement also includes other covenants, including covenants that, subject to certain exceptions, restrict the ability of the Company and its subsidiaries (i) to create, incur, assume or permit to exist any liens, (ii) to incur additional indebtedness, (iii) to make investments and acquisitions, (iv) to enter into mergers, consolidations or similar transactions, (v) to make certain dispositions of assets, (vi) to make dividends, distributions and prepayments of certain indebtedness, (vii) to change the nature of the Company's business, (viii) to enter into certain transactions with affiliates, (ix) to enter into certain burdensome agreements, (x) to make certain amendments to certain agreements and organizational documents and (xi) to make certain accounting changes.

The highlighted section makes it clear that the company may not pay dividends subject to certain exceptions, which means provided they meet these exceptions they may pay dividends.

Indeed the loan documents allow the following use of proceeds:


Section 6.11.   Use of Proceeds.  Use the proceeds of the Credit Extensions (i) for working capital, capital expenditures, and other lawful corporate purposes, including (without limitation) investments, acquisitions, stock repurchases and dividends not prohibited by the Loan Documents and (ii) to consummate the Refinancing

So they may buy back stock and pay dividends provided they meet a fairly burdensome list of possible events of default.

The only explanation (that is not truly nasty) that I have for drawing the revolvers is a deep desire to use the cash (whilst it is available) to buy back stock. However given the nasty taste that drawing revolvers gives to credit providers this is an aggressive thing to do. [But it is possible. I am not dismissing it.]

The disclosure that caused most amazement amongst Nu Skin watchers was a disclosure at the back of the credit agreement about how much money their offshore subsidiaries own them. This is a list:

If the foreign subsidiaries have the cash (and it is presumed they do) then they should - subject to payment restrictions - just pay it.

There is $24 million owed to head office by Venezuela. Good luck collecting that. But outside that the amounts should be collectable if the foreign subsidiaries are good for it. There is $133 million owed by China. This might be difficult to collect based on the amount of activity we have seen in China. However if they own the very large office complex we saw (see the post) they could collect some of it by selling up.

But the more pertinent question is why haven't all those subsidiaries been able to pay the money they owe to head office? Inquiring minds are asking. Especially as the company drew the revolvers.

The Venezuela amounts are irrelevant in Nu Skin (and Herbalife for that matter) but there is a contradiction between what the table above shows and the management says. According to recent presentation at the Wedbush conference they only had $10-15 million of sales in Venezuela.

It is hard to see how they are owed $24 million by a subsidiary that only has half that in sales. I can't square it. A clearer explanation of Venezuela exposure would be nice.