Weekend edition: Merrill Lynch and a guy who admits killing an underworld hitman

I have actually bothered to read a Lehman 10K cover to cover once. I understood only marginally more when I finished than when I started - so my ability to add value is thin. [Then again almost nobody actually understands the brokers.]

Given my lack of ability to add to the real issues I thought I would do something different – something highly tangential but topical – only because it involves a failing broker and this is the weekend of failing brokers. It also gives me a wonderfully salacious title. The title is only deserved because Merrill Lynch lent to a dodgy organisation which in turn lent to the underworld. It failed to do due diligence and it may have failed to perfect security.

When brokers fail there are losses for people who have financed the broker with bonds etc – and these losses are generally not transmitted systematically. And then there are losses to counterparties who are just trading with the broker in the ordinary course of running their investments or running their businesses. Those losses are much more systematically dangerous because they make people scared to deal with all brokers and potentially with counterparties to brokers and hence can cause systemic problems.

recently had some very large problems at very small brokers. These brokers are much smaller than Wall Street behemoths – so whilst they might provide some dry-run tests of the problem – they are just worth reading about because they are so colourful.

– the second largest city in - recently had the colourful spectator sport of pretty well the entire crime establishment murdering each other in a tit-for-tat professional hit style.

Given that (almost) all the victims were underworld characters when the murder trials happened at the end it was hard to get people to take them seriously. As far as most Melbournians were concerned if the underworld wants to remove each other why should anyone want to stop it?

One of the more interesting characters from the gangland wars was Mick Gatto – a former heavyweight boxer who was named as enforcer at various legal inquiries. He has convictions for burglary, assaulting police, racketeering, possessing firearms, and obtaining financial advantage by deception. Most Wall Street brokers wouldn't want him to marry their daughter.

Mick Gatto shot Andrew Veniamin who was an underworld hitman. He was arrested and the prosecutors over-reached charging him with first degree. Gatto convinced the jury that if he hadn’t shot Veniamin, then Veniamin would have shot him. It was self defence he cried and the jury agreed. Given that everyone even remotely involved seemed to get murdered the jury was probably right.

Mick Gatto’s private business has a title that if it were a Government department you would consider Orwellian. It is Arbitrations and Mediations Pty Ltd.

Mick Gatto would be fearsome when arbitrating any dispute

Opes used documentation loosely based on US Prime Brokerage documentation to deal with its clients. In most brokers hold their clients shares in a custody arrangement called CHESS in the clients names. The shares cannot be repledged. Some margin lenders (notably Leveraged Equities) provide securitised margin loans where the repledging of the shares looks legally difficult. Opes however provided loans provided you pledged your shares to them and granted them permission to repledge those shares. Read that twice – it is startling – but it is in fact not different from a lot of margin accounts provided by brokers globally.

When Opes went bust the clients discovered that they did not own the shares. Opes didn’t own them either because they had been repledged to ANZ Bank (an large Australian bank) and a firm most readers of this blog will be familiar with – Merrill Lynch.

Merrill Lynch and ANZ took the collateral that was pledged to them and sold it to recover most their loans (it may have been all their loans in the case of Merrills). Opes had over a billion dollars in debt to these institutions, 500 million of which was to Merrills.

There were people with $1 million in stock at Opes and with loans of $100 thousand and they lost everything.

Opes was an ugly story – it hardly reflects well on Merrill or ANZ. Both ANZ and Merrills are being sued for aiding and abetting a fraud. It really matters who you lend a half a billion to these days...

It is also potentially going to get VERY ugly for Merrill Lynch. There is quite a deal of evidence that neither ANZ or Merrill Lynch properly perfected security over collateral that they sold in satisfaction of their loans to Opes Prime. They are getting sued by the liquidator with the aim or removing their status as secured creditors. If Merrills loses this they probably lose a quarter of a billion. ANZ looks to want to settle so there is a real case here.

I started with the underworld and their grotesque series of murders – and I wound up with Merrill Lynch and ANZ. I need a pretty good segway here.

So here goes. It turns out that one of the big client group of Opes were – as the press phrased it

What were they doing? I don’t know – what do such business peopled do in a market with a broker that will allow them to short anything and doesn't ask too many questions about insider trading? You can fill your own details in.

And where did the OPES money go? After all they didn’t piss it against the wall with mindless speculation as per Lehman. They lent it on margin – but most margin loans should be collectable by selling stock (so a broker needs to be pretty incompetent to lose it).

But they did lose it – hundreds of millions of dollars worth of it.

Somehow the rumour is that it went to (and then presumably on into the financial netherworld). And then Mick Gatto – remember him – the guy that killed Andrew Veniamin got on the plane (first class I gather) and flew to to chase it. He was doing it on behalf of the above mentioned "business people" who were now clients of Mediations and Arbitrations – a firm that promises to "make problems disappear".

Here is a picture of Mick on the chairs in the Singapore Airlines lounge in . I have sat on those chairs myself. 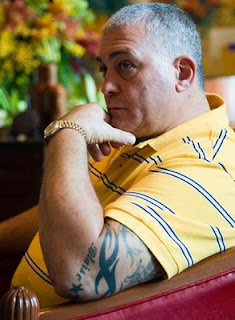 And here is the press link to explain his visit.

I have no idea who he was chasing but what we know is that Merrill Lynch (possibly without perfecting their security) funded a dodgy stockbroker who in turn funded rather suspect people in Australia, and then lost their money and somewhat annoyed a real life Dexter – a guy who admitted killing an underworld hitman.

went after Lehman Brothers and won. But in the scheme of things is a wimp. At least Mick Gatto wasn't after them. Lehman never annoyed Mick Gatto and Merrill probably did.

Now this is a serious investment blog - and I should answer the question on everyone's lips: "was there contagion?" The answer was YES. The other brokers with similar financing structures in Australia got into terrible trouble. Chimera hit the wall. Tricom is in diabolical trouble. The spectacular flame out of even a small broker causes contagion.

And that should worry everyone this week.