Funny – it is working!

At the end of an atrocious day I am going to be contrarian.

The Frannie bailout is working.

And companies that have to roll over billions of dollars of debt in the next few years are all problematic.

But then there was no reason why injection of money into Frannie should have solved Lehman’s problems. Lehman has to find its own money or fail or be bailed out (at effectively total loss to shareholders).

All a Frannie bailout could do is make conventional mortgages – the stuff that Frannie issued and insured – cheaper. Any other claim for the Frannie bailout is a stretch.

And on the limited thing that it is doing the evidence so far looks good. Here is the yield of Fannie Mae perfect coupons – note the spectacular drop in the last few days. 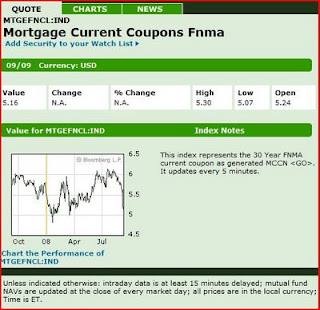 Note the 5.16% current yield versus the approximately 6% this measure seemd stuck at before the legislation and the 5.7ish numbers before the weekend.

The 1.7 billion Pimco one-day gain is the same story.

Frannie Mortgages have got much cheaper in a few days.

That should flow through to retail mortgage rates far more effectively than any of the recent Fed cuts. It probably won't solve the housing problems but it will ameliorate them. Any other a-priori claim for the bailout was optimism over analysis. And you can claim the bailout is a failure by setting up and demolishing a straw man. But an objective look says this bailout is by-and-large succeeding at its modest aims.

Is mortgage affordability really the issue

Or was (still may be) foreign repudiation of agency securities

I wonder when the Treasury market says "no mas" to bailout supply and balooning deficit spending.

The bailout is about 3 days old. It's a bit too soon to tell if it's going to work.

I beg to differ.

The effect of the mortgage interest deduction and Fannie and Freddy (and the shenanigans of Alan Greenspan in his efforts to prop up the Bush Administration which he loved for extraneous reasons) was to:

The effect of the bailout is more of the same.

Housing is becoming affordable, but no thanks to the oxymoronic "financial industry".

What the bailout does is subsidize the Chinese at the expense of the taxpayer and leave the homeowner out of job and out of a house.

I guess you could say it's working if you spoke Mandarin.

Mortgage rates are currently not the main driver of affordability in the residential real estate sector. This might make a diference at the margin, but the fundamental picture remains the same.

I don't disagree. This would all be better if we had never had a housing bubble.

And Greenspan and the US congress did their best to encourage a housing bubble - what with Greenspan urging everyone to take out ARM loans and congress giving vague charters to GSEs and mortgage interest deductions.

The policy question here however is not should we have done. That is obvious. It is what we should do now we are in this pickle. That is difficult - and whilst the bailout is two days old - it looks to be working.

There was a proposal a while ago for Australia to charter some GSEs. That was of course insane.

That happened with Sallie Mae.

We are now however in a second best world - and the GSE status will now be removed via what Paul Krugman has called "deprivatisation". Its not a great policy - but its better than the alternatives.

At no point have I implied that rates are the main determinant of what is going on in the mortgage market.

Prices will still GO DOWN.

But the availability of finance just went up and that will ameliorate the problem not solve it.

If anyone thought that this would solve the problem they were setting up a straw man to demolish. Easy to to do - not productive to argue. Doesn't add to our investment understanding.

The understanding - this will - at the margin - lower the cost of and increase the availability of mortgage finance for conventional mortgages with a 20% deposit.

And in that it is working.

The understanding - this will - at the margin - lower the cost of and increase the availability of mortgage finance for conventional mortgages with a 20% deposit.

And in that it is working.

I don't disagree that it is working in that narrow sense (for the time being at least; longer-term this may change), but my point is that is pretty much irrelevant in terms of boosting the US housing market. The reason being that there are not enough people who can afford to put down 20% and meet the tighter underwriting standards that now prevail to make a material difference to demand and soak up the excess supply of housing. At least not until affordability (price-to-rent, price-to-income) is restored, which won't happen for another year or two. And that's assuming that the US labour market doesn't deteriorate significantly. If it does, all bets are off.

So from an investment point of view, this is a non-event (except in the counterfactual, which would probably have been a meltdown scenario).

Housing prices are still severely out of alignment when compared against income or equivalent rent.

Fannie and Freddie were key enablers of this mess by virtue of making debt more affordable than a rational assessment of risks would have allowed.

Arbitrarily driving down the cost of mortgages without concern for the risks involved isn't a good thing. Instead, this is a bit like downing a bottle of Mad Dog to ameliorate the headache after a long hard weekend.

1) The Chinese lent money to homebuyers in the United States.

2) The Chinese used slave labor, an artificial currency peg, and protectionism to gut American industry and throw Americans out of work (cf. have any actions of the Chinese government helped Chinese citizens overall?).

3) On account of 2) the houses purchased in 1) have declined in value, and some of the money that the Chinese lent is not going to be paid back.

Okay, you say that the American government was complicit in this scheme. That's called contributory negligence. It's a mathematical formula.

But nowhere does it say that the Chinese must be made whole.

It would say that the Chinese must be made whole IF the debt had been guaranteed by the US government. But it wasn't. Admit it: it wasn't.

Why should American taxpayers make the Chinese whole? Why can't the Chinese take a haircut? They couldn't read the fine print? That's tough nougy(sp).

The real question is: Why aren't the peasants storming the castle? Eventually they will. When things become much worse.

So, is it working? That depends on whether it's going to get much worse. I think it will no matter how low mortgage rates go. That's where I differ.

Suppose spreads would stay relatively high over the longer term. That would hurt the earnings power of the GSE's, thus hurting the ability of the GSE's to pay back the government's capital injections.

Suppose appetite for GSE's bonds declines over time to, say half of what it was. The government has promised to step in and bus whatever's left on the shelf.

At what point would this unlimited funding break down under taxpayer's/currency pressure?

Or is what I am suggesting totally unrealistic?

Does the GSE thing cause the currency etc to break down?

And assume that the loss on default is 50% (again brutal as the LTV was 80 or less on most these mortgages).

This suggests at worst 10% of the 5 trillion goes bad. 500 billion. The GSE start with about 80 billion of pre-provision capital so the government is up for 420 billion.

This is an inconceiveably large number. It would stress me - except that it is less than one year of the Bush tax cuts and Iraq war.

The US Government seems to be able to handle those bills. This one is incremental.

It may be the "straw that breaks the camel's back" but it is only a straw.

If you are worried about the fiscal credibility you are right. But then you should stop fighting a war funded by tax cuts.