So what exactly do you get with Bank of the Internet stock?

There are only three banks in America who have

These are the most expensive banks in America. The raw data set is here (courtesy Capital IQ).

When you pay absolute top-dollar for a bank stock you need to be getting something special - either a better franchise, better management or the like. There has to be something that sets your bank apart from the run-of-the-mill franchises.

Otherwise - dear shareholders - your investment lies somewhere in the range between mere overpayment and being outright ripped off.

Bank of the Internet (NASDAQ:BOFI) is one of the three highest priced banks in America.

There is a "story" about what you are getting - a high growth ultra-low cost internet franchise.

But this blog post is not about the "story" - its about the reality. The reality is you are getting a 2005-style jumbo mortgage lender (with other odd high risk loans) funded primarily by high cost brokered deposit.

These are some examples from BofI's correspondent websites to explain what the really do. This one describes BofI as home for "portfolio Niche Jumbo Lending". 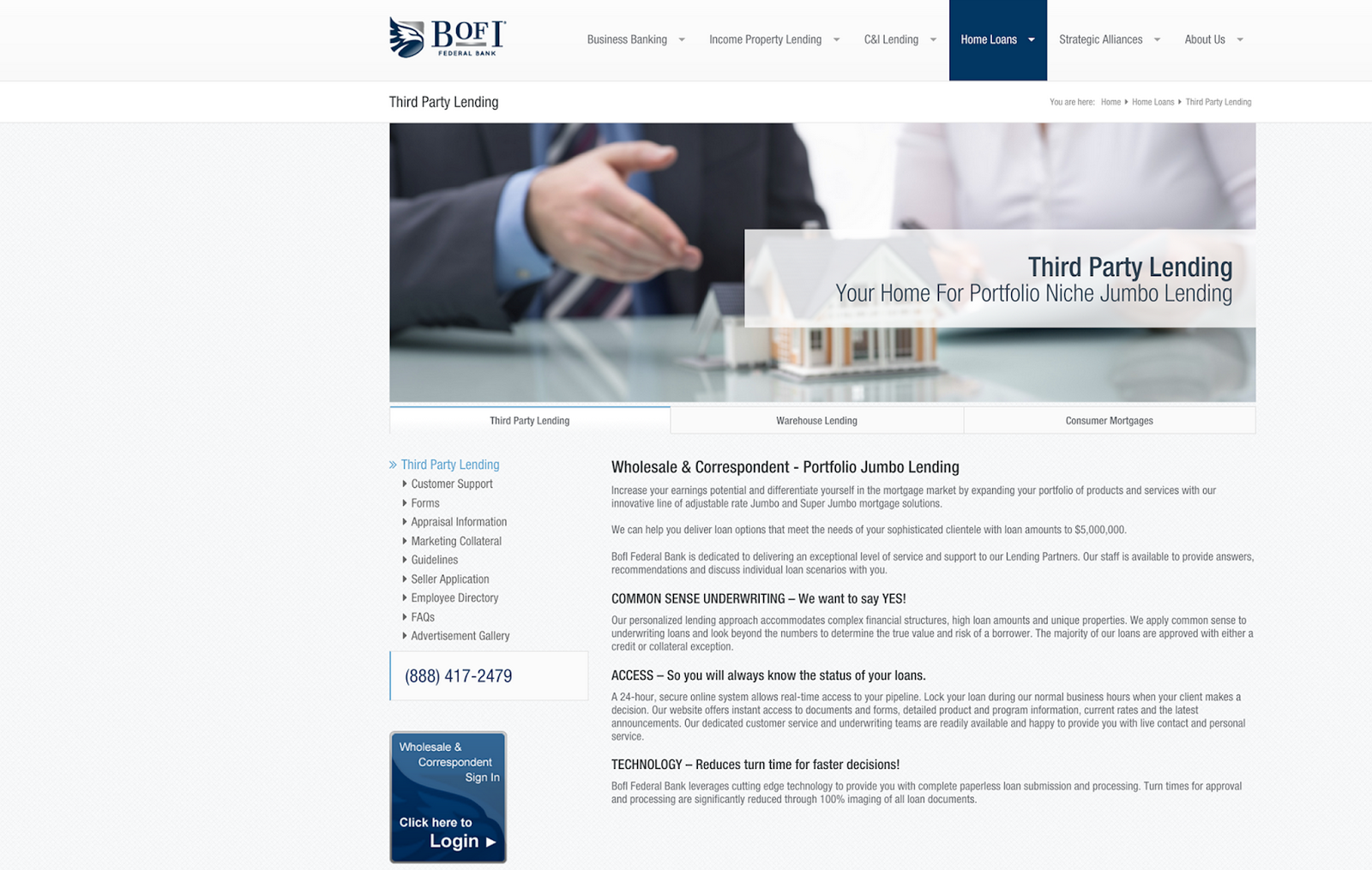 The money quote: "The majority of our loans are approved with either a credit or collateral exception".

In other words this is an exception lender. The exceptions are to their stated underwriting standards.

And because it lends by exception you are critically dependent on who is approving the exception loans.

Chasing through LinkedIn and other sources it appears that many of the people who approve the exceptions are from IndyMac and Thornburg Mortgage - both bankrupt jumbo mortgage lenders.

Whatever: here are a few more adverts for BofI Federal Bank - these are adverts distributed to mortgage brokers: For those who don't read the pictures it says "Self employed artist wants to buy a studio in New York. BOFI Federal Bank can do that."

The pic is of an exceptional artist. He throws pain and there is none on his clothes. And there is more in this advert: 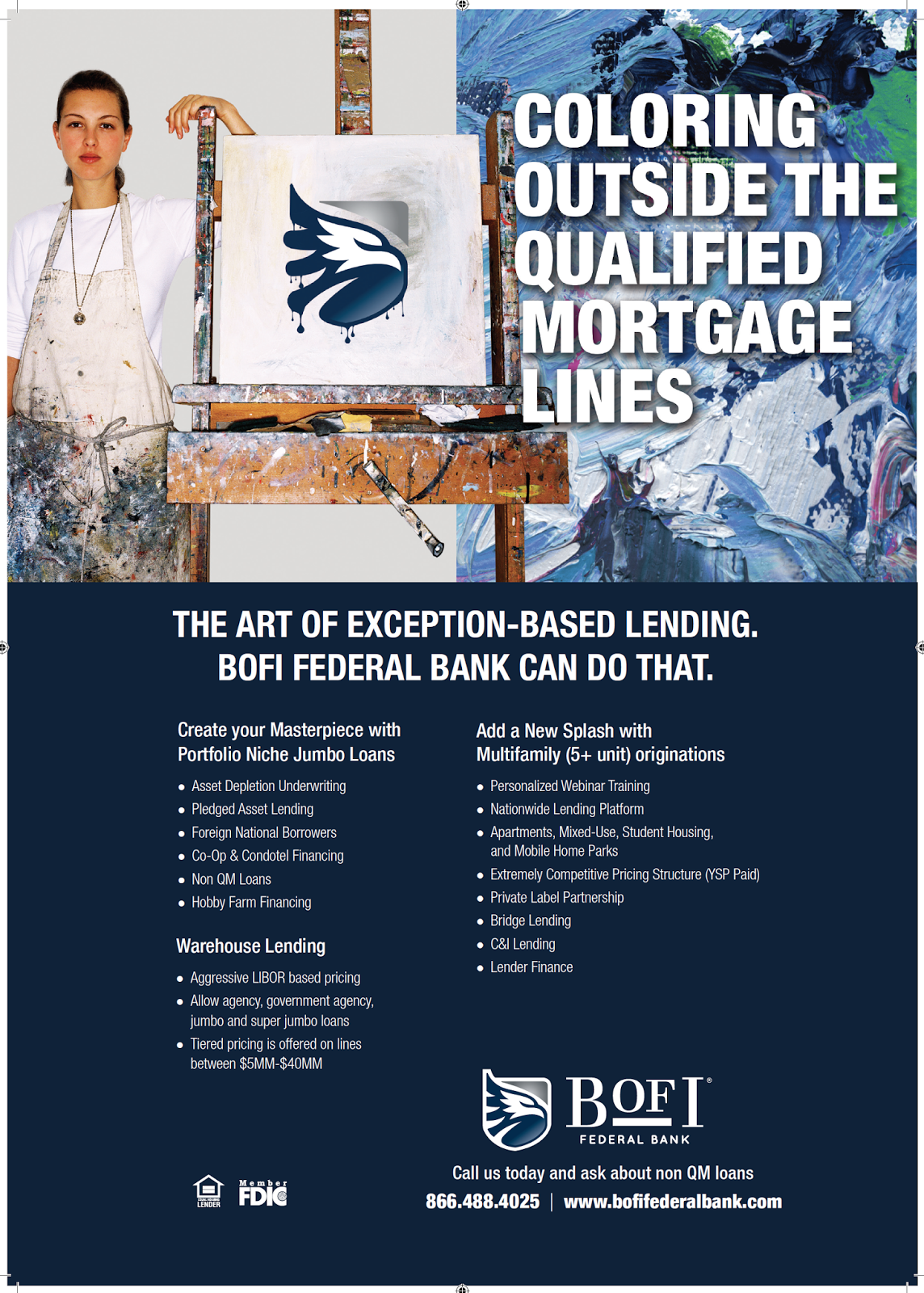 If you are a self-employed artist I guess they offer you an "exception".

Indeed they make a thing of it. Exception lending is - to quote the advert - an "art". And following LinkedIn we can see the artists come from IndyMac and Thornburg Mortgage...

John
Posted by John Hempton at 8:54 AM

This is going back 15 yr or so, but isn't the problem with these Internet Banks that the liability side of the balance sheet is all 'hot' money?

And what about interest rate risk? [mortgage lending]

You're also getting a bank that has increased revenues 19-fold and BVPS 4-fold over the last decade, with some rather accretive equity raises along the way. BOFI has always seemed to me too dear to buy and too sharp to short. There is such a thing as faking it til you make it.

well the problems would be both low credit quality on the asset side and higher cost and less stable deposit on the liability side.

You get asset allocators. Back in 2006 BOFI's managers were saying things like "Listen, WaMu and Indymac are being crazy right now in our backyard, so we're not going to originate anything. We'll buy up seasoned multi fam and jumbos w/ 50% ltvs and bide our time."

During the bubble years they willingly ate terrible NIM's and ROE's rather than gamble.

When recession hit BOFI's credit remained pristine, so they were able to pivot and began buying up illiquid MBS at firesale prices. That worked too.

Since then they've built out their origination network. Are they can "exception" lender? I suppose. I know they target non-qualifying folks who they perceive to be low risk, like Chinese nationals who wanna finance half a $1m home, but they don't have tax returns, but they do have $10m in the bank.

This is a particular instance of the general thing they've been doing for a decade: aggressively pivot to and from mispriced assets. Track records matter a bit, no? Theirs ain't bad.

But the combo of their cost structure, demonstrated ability to shift between asset classes, and the record of the studs that run this thing are real and valuable.

CrocodileChuck, I think finding good assets to balance the liabilities on your b/s is difficult in general for internet banks.

Something is not right with this bank....

Why would people with $10mn in the bank want to finance half the purchase of a $1mn house when deposit rates are zero?!

3 years later. Still a house of cards, etc ...?
Looks like they doubled the earnings, revenues, assets, etc.
Anyone buying 3 years ago has almost doubled their money.