Moodys has published a short report entitled RMBS Mid-Year Performance Update: H1 2008. This post will shamelessly rip off a two charts from it. The entire report is absolutely consistent with the data summary that I have been giving on this blog. Its really annoying to do all this work eyeballing hundreds of MBS pools and then find a really neat 8 page paper that does it all for you…

I would quote the report more broadly except that I do believe that they have some copyright issues. You might find someone to kindly send you it. Or you can buy it on the web here at an outrageous price. [If the price were one tenth the price listed here I would recommend it…]

But given that I do not own the research I will limit myself to a review.

The review goes through different types of collateral and different loss curves. I will not go through all of them for copyright reasons.

The first picture I will extract is cumulative losses on Subprime RMBS by year of origination. This is one of those “no hope” charts because losses are trending upwards fast with no obvious signs of stopping. 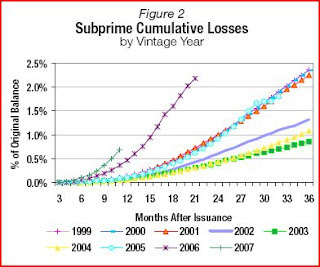 The picture makes it look like 2005 looked nasty and stabilised (something I have been saying for a while) but that the 2006 and 2007 pools have no hope. The 2007 pool is worse than the 2006 pool. [This should sound familiar to regular readers of this blog.]

The second chart I think makes the story a little clearer: 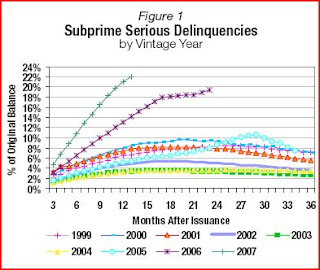 The 2005 pool had a delinquency hiccup – but is now back in the fold. I think we can safely estimate losses on 2005 subprime pools now and they are not that bad. The 2006 pools looked like they were stabilizing – and I blogged to that effect. The data in the last month however has given me some pause – hence my depressing thoughts post. Any light at the end of the tunnel in the 2007 pool looks like an oncoming train.

The same trends exist for Alt-A generally – but I am not going to extract all the data from the Moody’s report as I respect their copyright. I should say with Alt A the 2007 pools are not modestly worse then 2006 pools they are immodestly worse.

This is consistent with my rolling loans thesis. The loans could never be repaid but they could be refinanced. They kept getting refinanced to later pools and the last pool contained the detritus.

Moodys then break the Alt-A into conventional adjustable rate mortgages (ARMs) and Option Arms. It seems there is almost no last-month kick up in delinquency for conventional arms but a big kick-up for option ARMS. This suggests the problem is Option ARM resets and confirms the analysis of many of the people who have commented on my blog. [Dear readers – a lot of you are very smart - indeed the great joy of this blog is what it delivers to my inbox.]

They then do cumulative losses on jumbos. Similar trends – but there is a kick down in last month delinquency. Does anyone know why jumbo credit looks to have got better very quickly. I have no idea.

They then do subprime Closed End Seconds and HELOCs (something I have studied at great detail). There is MUCH more stabilisation in CES – even the 2007 pools appear to be stabilising, however HELOCs, which are generally more prime than CES are not showing the same stabilisation.

I would go further than the Moodys report and note that more generally the better the credit the worse the trend, or the worse the credit the better the trend. But nonetheless the Moody’s report is accurate, neat, short and should be got by anyone with decent access. The expensive source I link to is probably too expensive – but that is your choice.