The acquisition of through its satellite vehicle – Macquarie Airports – is perhaps the seminal infrastructure deal of our times.

What is more – the acquisition for about a billion dollars more than the number 2 bidder – was unequivocally a winner. Traffic and hence revenue went up. Funding costs went down and the large amount paid seemed to drop into distant memory.

There is little doubt ran the airport well. They hired uber-public servant Max Moore Wilton to run the place – and he did his political duty (scotching all sorts of regulatory interference – and a possible competing second airport). He also lived up to his public service moniker “Max the Axe” and ran the place as a lean profit machine.

When wrote her piece on she praised ’s profit ethos:

… so, about a month later, I arrived at Australia's Sydney Airport - which is owned by a Macquarie fund - during the early-morning rush hour, groggy after a long flight.

If you did the same thing, you might trudge through customs, not noticing much, perhaps, beyond the A$4 - gasp - it costs to hire a luggage trolley. But if you took the time to explore, you would realize that the airport is not a run-of-the-mill ripoff but an eerily efficient moneymaking enterprise.

You don't have to go far out of your way to buy souvenirs or coffee, because the airport's owners have studied how far you'll be willing to deviate from your path (five meters). You might buy a duty-free item not because you want one, but because doing so will shoot you into a special, speedy customs line. And should you drive to the airport, you would discover that parking your car in the shade ("the premium shaded parking product") costs an extra A$4.

Not that all this efficiency lessens the irritation that some users experience. As I shut the door of my cab, the driver begins an unsolicited rant about the fees he has to pay to wait at the airport. "Macquarie Bank owns it," he says. "They own too much."

was right. has been run brilliantly – and there is no more old public service culture fat to take out. They have done it.

It was more than any other deal that justified the validity of the “Macquarie Model”.

Macquarie Airports has booked its profit

All of this says that ’s seemingly overpriced 2002 purchase was in fact a bargain. That is why this – the highly controversial and visible purchase - is the seminal infrastructure deal of our time. It showed just how much public infrastructure run as “an eerily efficient money making enterprise” is worth”. The success of the Sydney Airport was lauded by countless (and possibly mindless) imitation.

however – being the leverage junkie it is – borrowed vastly more money (approximately $2 billion) against the airport and paid a massive dividend to Macquarie Airports (the listed trust/ultimate owner). This debt – like most debt in most vehicles has limited recourse – it has recourse only against and no other assets.

Given that Macquarie Airports (MAP) has received in cash more than they paid in cash and they can’t be forced to make good debt then MAP has made a profit. A big one – and a real one - one that can't be reversed. Even if were to go bust tomorrow it would have been on OK deal – at least assessed on a standalone basis. MAP holders will have done OK. Banks and other guarantors would have done their dough – but that is them. Those are the joys of non-recourse finance.

So what is left at ?

The short answer is a very well run airport and a lot of debt. Here is the balance sheet: 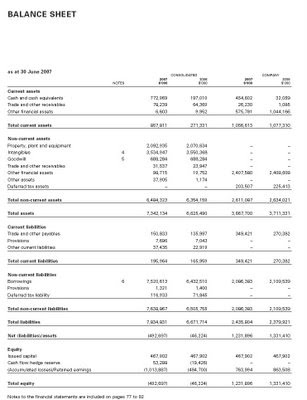 You can calculate the debt according to your own definition of debt. Maccqaurie picks a lower number because they think the fixed coupon subordinate (the SKIES) are equity. (That is funny given their name: Sydney Kingsford-Smith Income Equity Securities.)

And here is the P&L. 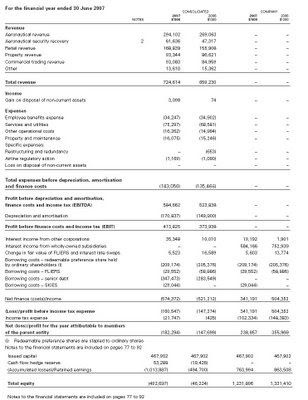 
Note in the P&L the operating profit (ie before depreciation) is only 10 million larger than the interest bill. After even basic maintenance capex the airport is cash-flow negative. That is an amazing debt load.

Macqaurie runs lots of its assets this way – though is the clearest example. They have run it with those sort of debt load since inception – and it has always been OK in the end because traffic and volume have risen every year. Costs have been kept (well) under control and everything has turned out roses despite negative initial cash flow. Indeed Macquarie values the equity in the loss making airport at several billion dollars on the assumption that traffic volumes increase.

But the summary is clear: requires increasing traffic to be solvent - let alone be worth anything like the claimed amounts.

Well it has increased every year. But this year is somewhat problematic. is almost the ultimate long-haul destination. is still booming so traffic volumes should be going up. But the cost of flying is going up too due to fuel and airlines are cutting flights. Further tourists generally don’t like the strong Aussie dollar.

So does have another trick?

Well the biggest problem now is how well has been run. Its too good.

The fall-off in air-traffic could be temporary. Air traffic has dipped before – but only for short periods. Maybe this will all blow over. If air traffic resumes its historic upward trend then this post should be ignored.

However the oil price hike looks fairly permanent. Does that make it difficult for ? Well a profit has already been made in cash on the airport. So from 8 miles high it doesn't look like a problem. From ground level - well I report - you decide.