In my post of Fifth Third I described WestAmerica as perhaps the most astounding unbroken story in American banking.

Here is its balance sheet from the last quarter – note that almost every category is shrinking: 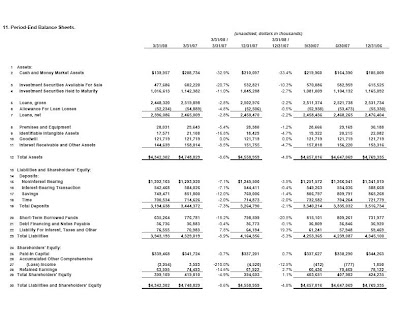 The company is not shrinking because it is forced to by lack of capital. Contrary - almost alone amongst banks it is buying back lots and lots of stock. This is not a bank that is going to use its superior performance to build capital and buy its competitors in crisis.

The management is comfortable with shrinking. Even deposits are shrinking deposits (somewhat by choice). WABC would rather keep cheap deposits than compete for them on price and service. (Unfortunately their competitors are not so kind.)

Everything is shrinking except the stock price.

The credit performance is great – amongst the best in . The local economy (driven by agriculture) is probably better than most. (They are in that great food bowl - the Central Valley of California.)

The bank is really hard to fault.

But it is preposterously expensive. Tangible shareholder equity (equity less goodwill) is 280 million. The market cap – 1.54 billion. Just under six times book. I have seen banks trade at that before – but not for a while. However those were banks priced for growth. This bank is negative growth. [The bank is over six times tangibles if you think deposit premiums are equivalent to goodwill.]

More to the point – the market cap is roughly half the (shrinking) deposits. Never seen that anywhere. Gosh we get excited at funds managers (who don't risk capital) when they trade at 10% of assets. We are at about 50% here. And fund managers with shrinking FUM tend to trade at very small percentages.

Further the earnings quality is not all its cracked up to be. The bank carries approximately 1.5 billion in investment securities – well over 5 times capital. About half these investment securites are pledged to provide floating rate financing – that is the bank is just running a big margin account to get some earnings. This is common in regional banks - and it works – but you would hardly want to pay a high teens multiple for those earnings. Most of the securities in this case are GSE debt, state and local debt, some mortgage backeds and some other "asset backed securities".

Still when banks are losing their shirt everywhere – this bank has come through remarkably unscathed.

Especially the stock price.
Posted by John Hempton at 5:01 PM

Went through this bank with a fund manager friend. Went through all the good bits of this bank. He was salivating.

Then he got to the investment portfolio, the shrinkage and the aggressive buy-backs at the current high prices.

His comment: "its a bit like dating a beautiful woman and then finding out she is your half sister".