One more brief comment on the Markopolis GE paper

The absolute core of the Harry Markopolis paper is that GE is dramatically under-reserved for long term care insurance.

And it clearly has been. It took a charge (ie recognised future losses) in 2017 and 2018. In accounting parlance they RECOGNISED huge losses in 2017 and 2018 for payments they will have to make in the future.

And Markopolis points to these charges as the evidence that GE has the worst long term care business in insurance.

Here is a slide that had my jaw dropping: 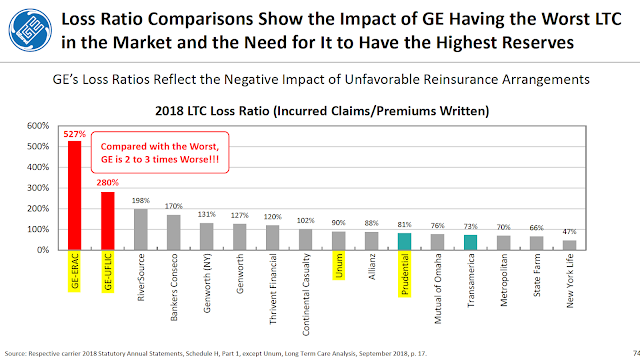 GE's Employer Re subsidiary (one of the two places it has long term care policies) it seems has a 527 percent loss ratio.

Yes, it does, in the year they take the huge reserve hit.

Markopolis is arguing the provisions they have already taken is proof that the book is bad. And he doesn't recognise current payments are way way below these provisions.

The Employers Re cash flow statement

So here is another way of looking at it. This is the operating part of the cash flow statement of Employers Re taken from the statutory statements. You can find the original here.

Yes, you see this right. The company had 500 million of premiums collected and 597 million of investment income. It paid out 893 million in benefit loss related payments. After all the sundry expenses Employers Re was still operating cash flow positive by more than 80 million.

The main source of the massive cash draw central to the Markopolis thesis is still cash flow positive. The 527 percent loss reserve above isn't a current payment by Employers Re - it is an estimate of their future payments. Current payments are completely manageable.

But that is not the point. Current cash flows are not the issue. And the combined ratio that Markopolis trumpets are not indicative of current cash flow. They are the provisions that GE is making for future cash flows.

Employers Re will not stay cash flow positive. Not close. Several things are going to happen to make it worse. These things will also happen at Union Life and both companies will become deeply cash flow negative.
First investment income is going to go down. This is inevitable. These policies were written 15 years ago or more and some of the bonds that back these policies were also purchased 15 years ago. As investment income goes down the cash-flow of the book will deteriorate.

Further as time goes on the insured get older. And as they pass through their 80s they will be more likely to wind up in nursing homes. Claims will increase.

Finally, for better or for worse some of the insured will stop making payments. The main reason this happens is that they die. The average age of insured here is in the late 70s.

So how did this impact GE holding company cash flow so negatively?

GE has an agreement with the insurance commissioner to maintain a 300 percent risk based capital ratio at these subsidiaries. When the subsidiaries take additional provisions for future claims it can cause a cash draw on the parent company even if the actual insurance companies are cash flow positive.

At year end last year the two companies had a capital adequacy ratio of 365 and 426 percent. They can take small hits from here without any cash charge to the parent company. But that is only after they took accounts of massive capital contributions by the GE parent company.

How does this run off?

After the capital contributions there are tens of billions of excess at the insurance companies. Alas this cannot be accessed for decades because of the promise to maintain 300 percent capital adequacy ratios. My guess - and at this point it is only an educated guess - that the company will still be under-reserved and further losses will be booked. But those losses will be insufficient to absorb the excess capital at the insurance companies. Over the next thirty years these insurance companies will be both a source of losses (provisioning) and a source of parent company cash (as the excess reserves get released).

This is so far from the Markopolis view as to be comical.

The average cost of a month in a nursing home is about $7000.

There are about 270 thousand policies outstanding. That number falls all the time because there are a lot of ninety year olds in the book and they die.

The statutory reserves per policy outstanding is about $75000. [You can multiply this out. It is a lot.]

In other words give-or-take there is about 11 months in a nursing home provisioned per policy holder.

The average length of stay in a nursing home seems to be about 29 months as per this.

According to this a senior citizen has about a one in four chance of winding up in a nursing home at some point.

If you know the claims rate (by age and sex) on their book and the age and sex distribution of insured you could work out whether the book was under-reserved for or not.

I suspect the provisioning is line-ball accurate here now. They haven't written a new policy in over a decade so the way the book runs off should be utterly obvious to GE now.

But I do not have the claim curves.

I guess this was the sort of information I was hoping for from Harry.

But I didn't get it.

This is extremely helpful. It took a ton of research to get all this info but it answered all questions and then some. Congrats

What about his claim that the 2021 accounting rule changes will require GE to take a $10B+ charge that will cause credit & covenant issues? (GAAP vs SAP)

Come on John, Harry said he works with a hedge fund, you think Harry showed all his cards and that's all he's got?

Let's see what he has to say about Baker Hughes in Round II.

If there is any more it better be higher quality than the first stuff. I cannot find a claim in this paper I agree with.

And I still think GE is a problematic company.

I am, in no way shape or form skilled at accounting. So with that said I have two questions. The first can probably be dismissed easily. Markopolos says he has turned over information to regulators for some type of legal action. I believe he said he had "several smoking guns". Is this worth consideration? The second involves the time frames and the market conditions when the policies were written versus where things are now. My understanding is that the problem policies were written 15 years ago. Did insurance cost increases due to the implementation of Obamacare have an impact on cost projections?