Commonwealth Bank of Australia (CBA) last year faced a devastating expose of their financial planning business by Four Corners. Four Corners is the premier current affairs program of the ABC*. You can find that program here.

After the travesty detailed by Four Corners CBA promised to be the "ethical bank".

Today Four Corners was back with an expose as to how CBA has systematically denied insurance claims for trauma and other medical maladies. This was through their business arm called CommInsure.

You can find that program here.]

Amongst the allegations: medical files just disappear from their system.

I guess CommInsure is in the business of making things disappear. Here is a photo of their twitter account (https://twitter.com/CommInsure) 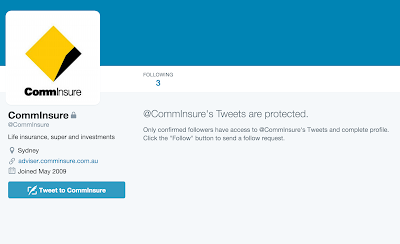 Maybe the Twitter account was never there - but searching @CommInsure on Twitter gives a fairly consistent history of reluctance to pay claims. This is an extract from the timeline well before the Four Corners episode. 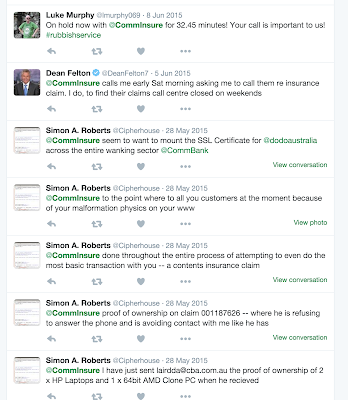 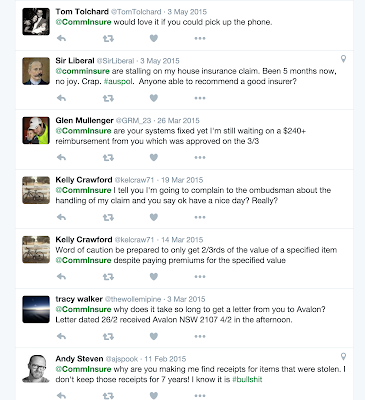 The whole stream is littered with claims complaints. If the senior brass did not know this is wilful ignorance.

PS. All this is indicative of a "make the numbers or else" management style. Head office claims ignorance of what happens in the periphery even though it is obvious to those that look.

Head office also claims their mortgage underwriting is good. I suspect someone should actually go take a look. (But that is a story for future blog posts and future episodes of Four Corners.)


*For non-Australians think of the ABC as the Australian version of the BBC. You will not be far wrong.
Posted by John Hempton at 12:05 AM

Large government guaranteed organizations whereby layers of bureaucracy do whatever it takes to keep their jobs. Decision making gets pushed up from the front line to anonymous committees and down from the CEO suite to to the same anonymous committees. A few rogue "bad apples" are to blame

When it starts to come undone the rats in the process do whatever it takes to save their skin knowing that they are easily replaceable. Said rats become vindictive post their leaving and spill the beans.

The CEO's "disappointed and saddened" (or whatever platitude it was) is nauseating in it's hollowness.

Why go to the US or China to sniff out a fraud when the biggest one of all could well be under your very nose ?

"Head office claims ignorance of what happens in the periphery even though it is obvious to those that look."

I think that's called 'plausible deniability', isn't it John ? Something an awful lot of grifters are quite good at.

Every cog at every level of the chain is incentivized to maximize profit; when one's six figure bonus depends on it (CBA financial planners for example)then it is easy to see how this happens.

CBA financial planners get a 50% bonus for reaching their stretch targets. FP managers 70% bonus and state FP managers up to 100% of their base!! No wonder they sell their 90yr old grandmothers geared share funds. State FP managers get a lowly $240k salary and they rely on their generous bonus to survive, poor guys.

God help the lowly CBA para-planner (15% bonus potential rarely ever achieved due to negative FP feedback) who'd question a FP's sales decisions. You've got to be a 'team player' to survive, after all your ethical decisions are affecting all those above you and preventing them from maximizing their bonus potential. Get with the programme or get off this 'winning' ship.

It is endemic and by all accounts across the board at the big four and Macquarie. God helps those who help themselves; and there are plenty helping themselves to some ill acquired 'sales bonuses' at least at CBA.

Twitter has been misused by Comminsure since inception. The businesses's marketeers hazarded that it would serve as a white space marketing opportunity. But it turned into an non-vetted complaints log. The Comminsure marketeers over-claimed the usefulness of Twitter.

Twitter is aimed at people's social needs. Think Maslow's hierarchy needs theory. It provides a place for people to express themselves and connect with others. People will complain on Comminsure's account primarily for two reasons:
1. In an attempt to publicly embarrass Comminsure
2. To express their feeling of being wronged in a way, which they hope, will draw voiced support from other's in the community.

It was a smart business decision to suspend the Twitter account. Comminsure now needs to implement a forum which ensures that customer messages are getting to those who can implement change. The forum must also deliver satisfaction to customers in a way they gives relief and a sense of being understood.

While the media critique of Comminsure profit above all else is apparent, there are also other considerations which may help to understand the Comminsure problems. For yonks, anthropologists have shown that as groups become increasingly sophisticated and complex, they may interlink, but also subdivide in the pursuit of productivity, Tis leads to competitive and protective workers. Comminsure needs to find better ways of rewarding decision making, that hold to greater community standards.

I am but a 1st year economics and psychology major. Though am already thinking about who I want to serve in my future finance career. I find the opportunities for improvement at the CBA to be quite exciting and realistic.

It's kind of nuts that they'd incentivise so hard for what is essentially horrific verging on fraudulent lending practices, and then.... document it all so fastidiously in the call centres with automatic recording and cataloguing.

Any updated thoughts on SUNE since the VSLR deal is broken?

I have always wondered why commonwealth bank is given such regard.

Sure they have large earnings - but their products are largely uncompetitive and they don't even seem to try to win new business or treat their existing customers right (other banks throw out all kinds of incentives).

Their main advantage seems to be incumbency - is this worth so much?

Just came across your blog John and i have enjoyed it so far.


Just thought I would put my 2c on this post. After uni I worked for the marketing company who used to sell CommInsure products, namely life and accident insurance.

CommInsure paid some pretty neat commissions to the company so of course we were pushed to sell as many policies as possible. The quality assurance agents where increasingly told to be lenient on the the sales call recordings and let through as many as possible so if a sales rep sells a products and doesn't adequately explain the exclusions ...then it should be okay just so long as the customer can be heard saying yup yup on the call. So this whole saga is hardly surprising to me.