Maximus (NYSE:MMS) is a large cap and highly valued government outsourcing company based in Reston Virginia (outer suburban Washington). Its second biggest market by revenue is Australia (and I think by the amount of cash trapped in Australia in presumably depreciating Australian dollars the Australian arm has been particularly profitable).*

The stock chart is - well - ballistic. This is a market favourite: 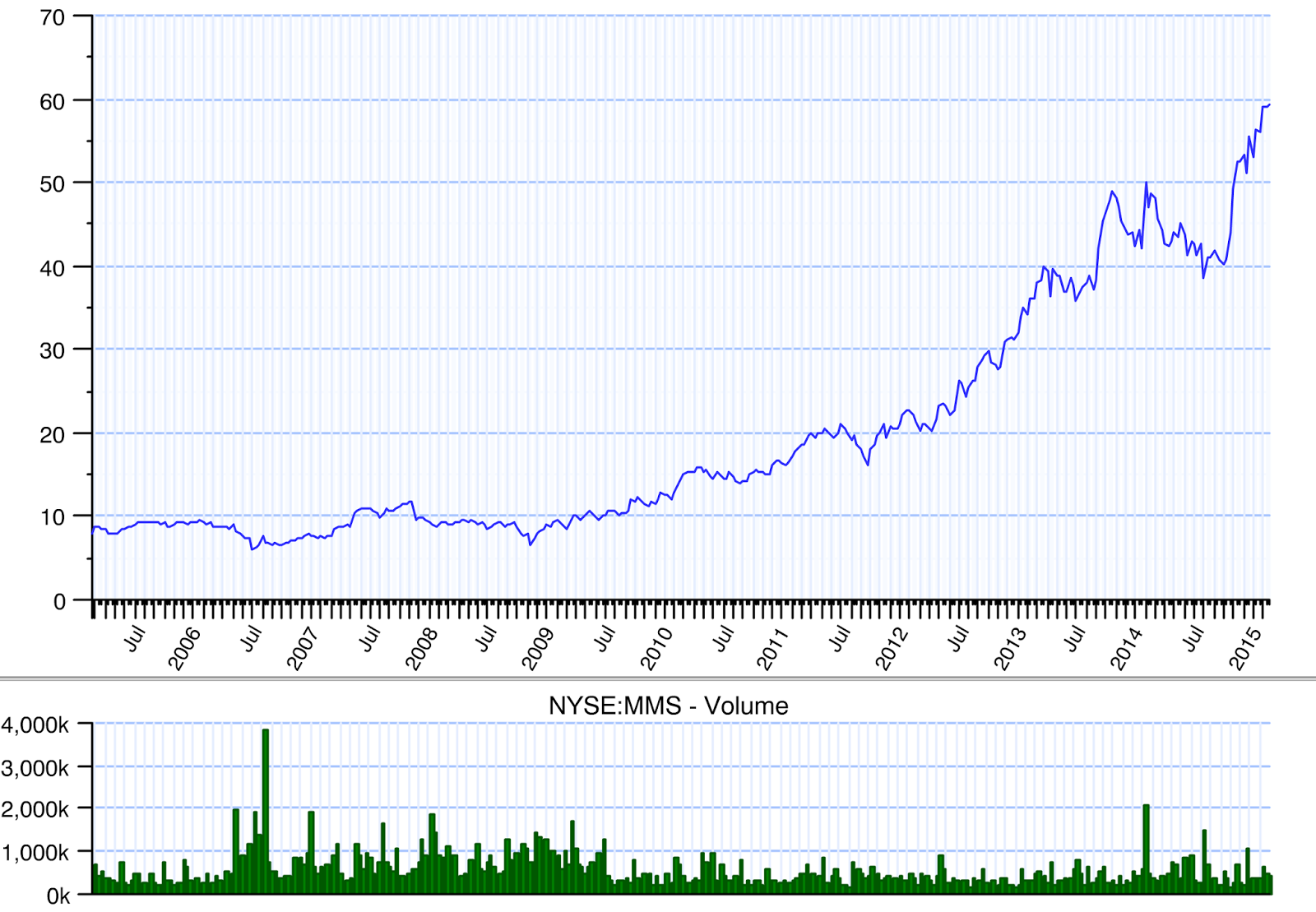 Here is the revenue split from the last Form 10K.

We operate primarily in the United States, Australia, Canada, the United Kingdom and Saudi Arabia.
Our revenue was distributed as follows (in thousands):

The Australian revenue is from a government outsourced employment agency business.

To get welfare payments in Australia you need to be actively looking for work (and sometimes need to appear at minimal job-readiness courses and the like). Until 17 years ago the government had a large bureaucracy (The Commonwealth Employment Service) who administered this.

The CES was effectively privatised with private sector organisations (and sometimes charities such as the Salvation Army) taking this function. The function included sometimes kicking welfare recipients off welfare (something that made the business difficult for some charities).

Last night the Australian Broadcasting Commission (the Australian equivalent of the BBC) aired a program on how this program is working. This was done on "4 Corners" which is far-and-away the lead current affairs program in Australia.

It was not pretty.

"There are credible claims of widespread rorting by some agencies.... we have now completed an investigation which suggest that significant fraud, criminality is going on."

Later it suggested that only 40 percent of the fees paid to agencies were against verifiable activities. The widespread practice of falsifying signatures, falsifying job interviews that unemployed people attended and falsifying disabilities of the unemployed was exposed. [For example an agency collected larger fees for working with more "disabled" people so there was a tendency to suggest people had mental illnesses or the like. More regularly signatures were faked using cut-and-paste methods to show unemployed people attending interviews that they did not attend or training courses that they did not attend and hence to rort fees from the Government.]

The number one target of 4 Corners was a domestically owned organisation called ORS. The evidence (if true) was utterly scathing.

Max Solutions - the Australian business of Maximus - was the second biggest target - but to be fair the claims made against them were far less scathing. Still they alleged that Max was directing unemployed to fictional training programs owned by Maximus and hence rorting the government. For instance they suggested that Max Solutions had enrolled 115 people in a training program in a room that could physically only take 15 people. [They were presumably - although this is not stated - faking attendance or even enrolment records or else they would not have got paid for these services.]

You can find the story (including a video replay) here.

All of this is going to be deeply problematic for Maximus though. As the last 10-K disclosed:

We are currently in the process of rebidding on much of our work in Australia. We anticipate that a new contract will commence during the fourth quarter of fiscal year 2015. These contracts are likely to have more contingent revenue streams, less up-front fees and will likely incur losses in early quarters. However, we anticipate that the contracts will be profitable.

It isn't much fun to face such accusations by the National Broadcaster as you are rebidding all your contracts.

*$220 million in cash is held in currencies other than the USD. Given the Australian dollar has been very weak that hasn't been particularly nice.
Posted by John Hempton at 2:29 PM

"rorting"? = fraud? Must be antipodean english...

I think it's the Australian Broadcasting Corporation, not commission.

To be a devil's advocate: wouldn't the Abbott govt be predisposed to ignore anything the ABC says, especially if this means being able to re-tender to private organisations rather than have to take work back in-house?

Might US investors also be getting excited about the prospect of new work should the upcoming King vs Burwell suit succeed and lots of State governments need help with exchanges.

I think despite any rorting - companies like Max are achieving the real goals of government (both labor and liberal) vs the old system. i.e. making life so complicated for those on welfare that they either drop out of the system or move into other areas (education).

Finding them a job simply isn't the real goal of this system.

Therefore I wouldn't be too concerned about them losing any future business.

Nice find. The market, however, seems compelled to ignore it.