Several people did not get the significance of my last post. This post showed a remarkable lack of correlation between the location of the Chinese population and the sales of Nu Skin in China.

Western China - even if you include the populous provinces of Sichuan and Yunnan is still only a small percentage of the Chinese population - and it is a smaller percentage of Chinese disposable income.

But Western China looms large in Nu Skin's China sales. China hands I talk to know no other consumer company that has sales so weighted to the West.

For most companies (and over the whole industry) almost all Chinese retail sales come from populous and relatively rich Eastern Provinces. China Business Review published a reasonable summary. To quote:

Because of the wide disparities among China’s regions and the country’s rural-urban income gap, purchasing power and retail demand vary greatly. According to the PRC National Bureau of Statistics, 42 percent of China’s total retail sales in 2008 came from (by rank) Guangdong, Shandong, Jiangsu, Zhejiang, and Henan—most of which are prosperous eastern provinces. In comparison, Tibet, Qinghai, Ningxia, Hainan, and Gansu had the lowest retail sales that year.


The old-hands think Nu Skin's sales distribution is very unlikely. But according to Nu Skin's auditor it is profitable in China.

Nu Skin is - at least according to their presentations - actively opening stores in the most unlikely places in Western China. Here - from November last year is a store-opening plan: 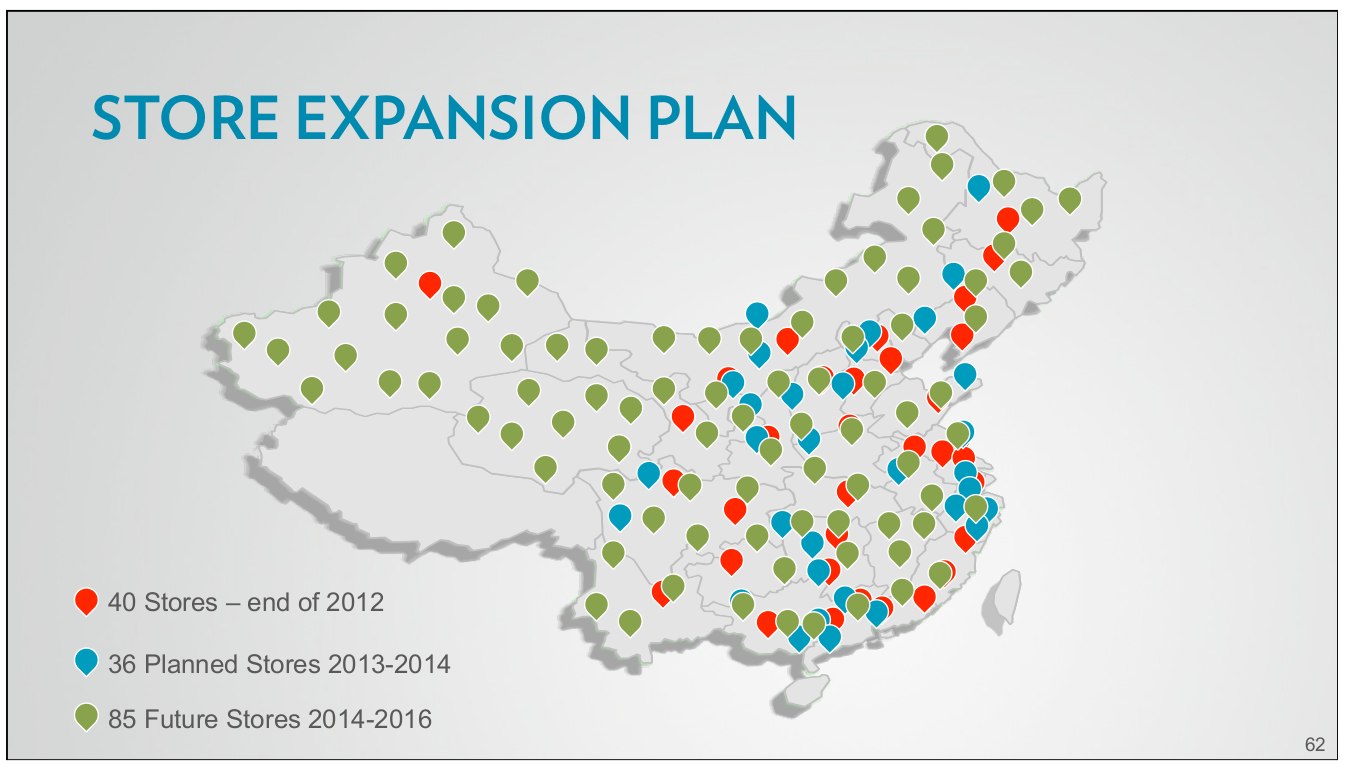 There are no stores planned in Tibet, but plenty in other poor and thinly populated provinces. Indeed there are several in Chinese high-altitude desert where there are no permanent settlements, only pastoral nomads.

Nu Skin's sales distribution figures in China seem implausible but the aggregate sales are audited - so they should be believed.

Moreover the company's plans are indicative of their past-success in Western China. They are (proudly) setting up shops where nobody lives.

Not only are they good at selling to Uyghur women, but they also appear to have big plans to introduce network marketing to pastoral nomads.

300 million people live in Western China. How is that "thinly populated"? That represents about 22% of the Chinese population, which is what Nu Skin said their Chinese sales are for the region...doesn't seem impossible to believe.

Versus the official provinces of Eastern China (a much much smaller area).

The Nu Skin distribution is a joke - especially after you take account disposable income differences.

Do you think its impossible that their "Western China sales" could be centralized in a couple major cities that aren't "West" in the Uighur sense?

You'd know better than I, but I assume your old hand retail experts are running traditional retail shops, with a flagship store in Wanfujing in Beijing or Plaza 66 in Shanghai racking up tens of thousands of walk-through's a day. I think its different when you rely on network selling. It may even be easier for network selling in places where Western cosmetics are not dominant as they are in Shanghai. It would be interesting and more convincing if you could compare to say, Amway.

NuSkin's distribution plan in Western China looks silly, I'd agree. It looks like they kind of spread the dots around Qinghai and Xinjiang there. I doubt that plan ends up coming to fruition.

For them, though, capital allocation for those stores would be close to zero, if they're the stores I'm thinking of--they'd probably look a lot like the HLF club you visited in the Bronx.

I feel like I'm playing devil's advocate here because you can look at these numbers a number of ways. They're not conclusive. In my opinion.

Umm, ya, I can count...can you? Thanks for the link to prove my point, which shows the Western China population at 289.6m people. And that data is as of the year 2000. Growing at 0.5% per year, current population would be over 310m.

Now, maybe that doesn't sound like very many people compared to the world dominating population that is Australia...but it's actually quite a lot of consumers to sell to. It's the same population as the United States. Oh, and given that the area of the US is 80% larger than that of Western China, the population density in the latter is considerably higher. But maybe you consider the US too small and too spread out a population to support retail stores?

The relative population argument that you are trying to make (Western China vs. Eastern China) is completely irrelevant. By your logic, Canada can't support retail stores because it is less populated and less dense than the US. The only fact that matters here is that Nu Skin is expanding into a region that has over 300 million consumers in it! (think 14 Australia's if that helps)

If they are doing poorly in places like Chongqing and Chengdu, 23% looks pretty implausible. But if they're doing well in those areas, who knows? Maybe they're less sophisticated than the average north-easterner and easier marks for this sort of product. Might be worth looking at these places (at least Chongqing) to rule out (or not) plausible explanations.

And I suppose another thing you'd have to ask is: If they divided China into NESW, where'd central China go? In particular, did they group places like Henan with East or West? Their "plans" for nomad-stores aside, thinking that 23% is implausible seems a bit of a jump to conclusions without even knowing what they mean by "West China" in the first place.

With all due respect to our friends accross the ocean, this clearly proves again (as many maps on CNN) that geography teaching in America sucks.

True, population is important for the MLM model to work. But people also need money to purchase these over priced MLM products. The average annual salary across the country's central and western regions is reported at around US$7,056. The Tibetan pastoralist households annual income is given as approx. 65 to 200 US $. Then, for the MLM model to work, they have to recruit. But how are they going to do that by opening stores where human life is not possible, as some articles suggest?