Valeant Pharmaceuticals is the hottest stock in the hottest sector (pharmaceuticals and biotech). It also has the strangest business model: it acquires existing companies, strips them of most of their research and development and a large proportion of their other staff and extracts huge margins.

As John Gapper observed in the FT: if the entire industry adopted Valeant’s approach, drug discovery would grind to a halt.


Valeant’s business model is as simple as its accounting and tax structure are complex. While at McKinsey, Mr Pearson [the Valeant CEO] concluded that the industry he advised was spendthrift, not only in the sums it spent on headquarters and staff but in its investment in drug discovery. Employing scientists to search for new drugs was a waste of money because they often failed.

When he got the chance to put his ideas into practice he cut Valeant’s research to 3 per cent of revenues – compared with about 19 per cent at big pharma companies – and acquired products by buying other companies with debt. Valeant has taken over more than 35 companies since 2008, including Bausch + Lomb, which it acquired for $8.7bn last year.

To the extent that the stock price does the analysis this has been an outrageous success. The market clearly thinks Mr Pearson has the goods. This is one of those charts that is so good it makes no sense to view it in anything other than log-scale. 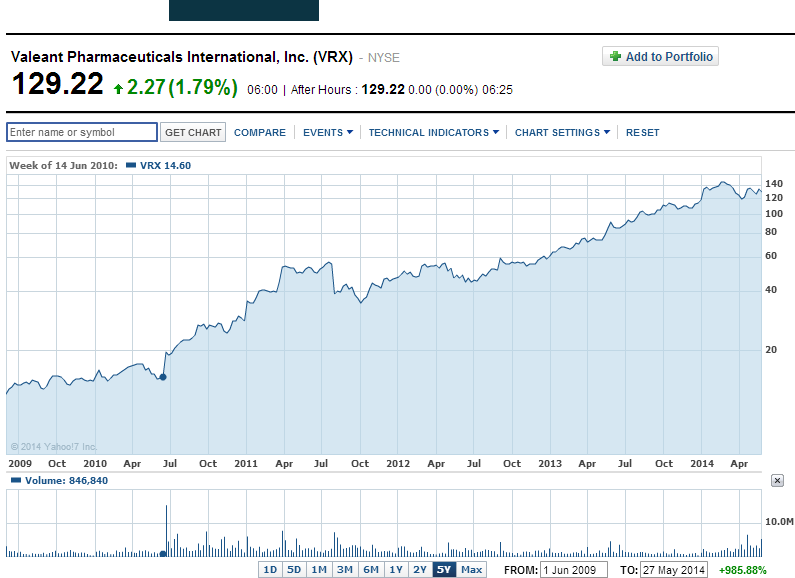 The market cap is now over $43 billion. If you add in the net debt the enterprise value approaches $60 billion. This is one of the largest companies in the space by enterprise value. Enterprise value is over ten times historic sales (though somewhat less than that relative to the current sales run-rate). Whatever: this is very highly valued.

I am however a disagreeable person. I don't look at charts much - and my skill sets are accounting and tax driven. So I am inclined to take the accounting (and hopefully tax) issues head on and thus assess Mr Pearson's achievement.

Alas - and I stating this in advance - this will be one of the more complicated projects this blog has and I have little idea how many posts this will take. I might learn a few things along the way too. So with the next post I will start you on the journey proper. Hopefully, dear readers, this will be useful for you too.

PS: In the interests of disclosure I should let you know I have done enough work in advance to have a position here. Short.
Posted by John Hempton at 12:52 AM

This is the former Biovail Corp in Canada, which I believe was involved in some questionable practices a decade ago.

The argument that "if the entire industry adopted Valeant's approach, discovery would grind to a halt" makes no sense.

Valeant is very acquisitive-- they buy companies whose main assets are the products of successful research and development. Therefore, they ARE supportive of research-- but only the successful variety. They want finished products. This does not imply anything about the future of research in the pharma industry.

I can easily see a scenario where smaller firms conduct 100% of the R&D, and the successful ones sell to the big Pharma co's, which use their regulatory and development expertise to bring the drugs to market.

To a certain extent, the above scenario has already been playing out for years. Valeant has simply done it more explicitly than some others.

That sort of bifurcation between (speculative) research and marketing/late stage development implies nothing about the long term fate of pharma innovation.

why would it grind to halt, wont the start up/pipeline biotech/pharma fill that void

i believe the current ceo, mike pearson wasn't at the firm back in 06 with biovail.

I bought and sold VRX after it converted from BVF. Shortly before the big run-up we were about to sue (class action) to get back what we could. Its move up is nothing short of a miracle, so I'll be reading your follow-up on your short and why you think it will fall.

Its not specific Pharma co's that have a problem.

Valeant's strategy is exactly equivalent to a bank or finance company that quits lending. Sure, the net interest margin fattens up considerably, and top management looks brilliant.

…until two years down the track, when they're looking for an acquirer.

VRX just follow a different path. Instead of spending on R&D, they use it on acquiring proven and approved drugs.

VRX says that the record of productivity on R&D spending for big pharmas are so low. Indeed, of the 50 largest drugs, only 4 are discovered at big pharmas, according to the CNBC interview on Monday on both Ackman and Porter.

Take for instance, Gilead market cap has gone from $30b+ to $120b, primarily because of Solvadi. And Solvadi is not discovered thru Gilead's own R&D spending. Instead, it was acquired by Gilead for $11b when the drug was still in the phase 2 or 3 stage.

How is this any different to any large organisation that acquires successful start-ups?

Take any number of tech acquisitions, where some large company (Apple, Google, Yahoo, IBM, HP) buys a successful start-up for it's technology, integrates it into their product line but within a few years most of the team who did the original R+D in the start-up have all quit and left for greener pastures.

There will always be people more interested in the R+D and acquisition provides them a lucrative exit. The acquirer then just focuses on monetising the already tested new product.

How does your thesis compare to for example, Heinz, after it is acquired by 3G? Heinz, too, showed a huge reduction in profit, primarily because of one-time cost such as restructuring and inventory step-up. So should these also be one-time or recurring? One reason why VRX keeps showing such expenses (and thus makes it to look as if it is recurring is because before their acquisitions have settled down, they make new acquisitions).

Probably, BUD also shows similar pattern when they InBev took over BUD in 2010.

I cannot say for sure that the entire big pharma space is low on productivity in R&D. However, I did a very basic computation on Gilead's R&D since 2005. They spent about $9b from 2005 to 2013.

So I assume that the $9b R&D spent is minimally related to these 3 drugs. They are all likely on discovering new drugs and for line extension for current drugs. Likely the bulk on early stage or new discovery.

I haven't published a thesis yet. Either the one off charges are sensible in which case Valeant is good or they are not in which case it is a con.

I will try to break down the one off charges in the next post.

Brian. Many of the Gilead expenses were related to the purchased drugs.

John, Happy to see that you are back in this mode. Best wishes

John,
The real test for Valeant would be
to see
1. how durable the revenue of their products (ackman contends good majority of their products are durable even after patent expiries)
2. they don't acquire for say 5 years and see if they still can grow and improve their balance sheet currently ridden with debt

I personally like the number 1 dermatology generic player in the US: Taro...much better than VRX http://stocksdd.blogspot.com/2014/05/taros-solid-performance-continues.html

I await to hear the thesis eagerly. Endo is pursing the same strategy and Actavis as well I think.

I know more than a few hedgies are suspect of Valent and the accouting I have heard is suspect as well, and that is what is just disclosed, there are always nice games to be played with purchase accounting (discounting COGS to show later higher GP).

But the thesis that most drug R&D is not s/h beneficial is a good point so I am a little torn.

...look at the pipeline with a fair number of late stage drugs--that uses R&D too and if they are approved it will be through Gilead's own R&D which is a valuable part of the business

Valeant has returned a miserly 4% on invested income. In spite of the much lauded business model, it has been a value destroying path to growth so far since cost of capital is around 10% far exceeding ROIC

meanwhile Gilead has changed the lives of patients and extended lives through R&D. Consider HIV was a death sentence in 1990 and through Gilead's efforts is now chronic disease treated with an easy to comply with regimen of one pill per day. In exchange they have excellent cash flow, impressive gaap earnings and an enviable balance sheet. Valeant is overleveraged and massively diluting shareholders, focusing investor attention on non-gaap numbers paying exorbitant interest on high cost debt. if the Allergan deal goes through interest will double. Even now without Allergan, operating income doesn't cover interest--negative coverage ratio. But that's OK if you just use the non-gaap numbers!

Valeant does little except buy competitor pharma's unwanted franchises and ride them to the end.

Seems to me this approach is very similar to oil company consolidation that went on in the late 70's or early 80's. Rather than dig holes in the ground, acquirers went out and bought other oil companies. It was called "digging for oil on Wall Street."