The mysterious case of the disappearing competitor: Focus Media edition

Every year they publish in their annual report a list of the largest display advertising businesses in the world - their competitors. 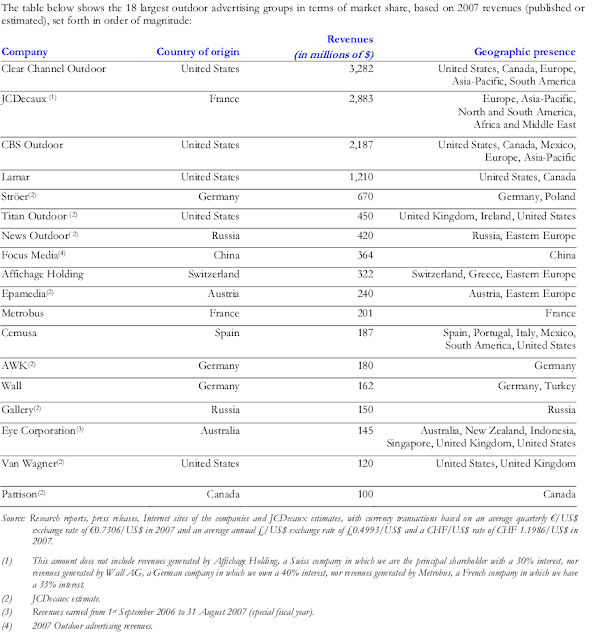 On this list, Focus Media is the 8th largest company in the world in this space.

And here is the list from the 2008 annual report: 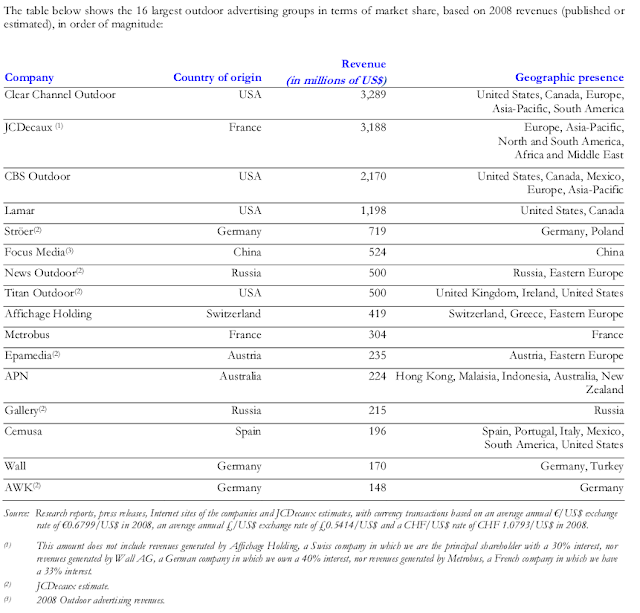 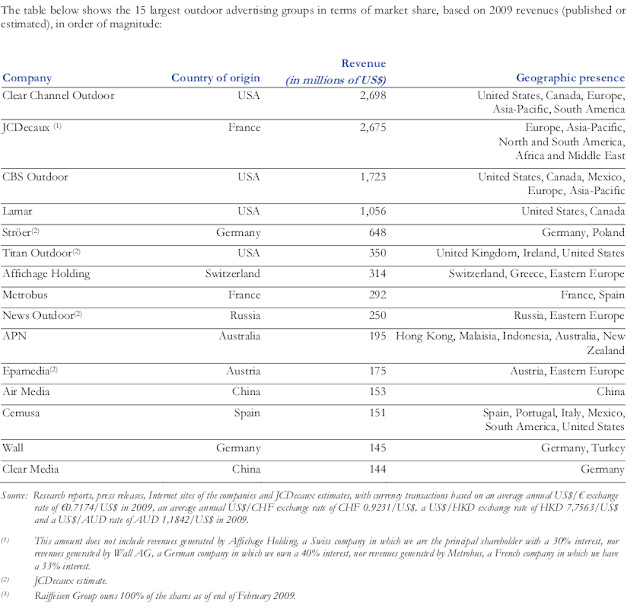 Peculiarly Focus Media is nowhere to be seen on this list (by the end of 2009 it should have risen to fifth place).

Focus Media is no longer mentioned in JCDecaux's 2010 and 2011 accounts.

Well I can think of two hypotheses:

The first is that JCDecaux want to sustain their claim of being the biggest display advertising business in China - a claim that is simply not tenable if they include Focus Media in the comparison. Moreover they don't want to increase the credibility with advertisers of Focus Media and its products. After all Focus Media has substantially outperformed JCDecaux in China - growing much faster and at much fatter margins.

An alternative hypothesis is that they don't believe Focus Media's numbers.

PS. I first found these lists when researching China Media Express. CCME supposedly competed with JCDecaux in placing adverts on public transport (in CCME's case mostly buses including airport buses). CCME however was a complete fraud and the stock now trades at 2c. Focus Media is obviously real - their displays are widespread.
Posted by John Hempton at 10:52 AM

Have you tried asking their IR debt? Maybe they have some sort of explanation for the disappearance, which would be interesting and possibly shed light one way or the other.

CCME was actually revoked so it now does not trade at all.

You are correct- last trade was 2c.

If you are a long investor who purchased at $20 the difference between 2c and zero is not very much really.

100 thousand dollars worth would be 500 thousand shares. That is on last trade worth $100. Barely worth trading if you could have sold anyway without sending the price to 0.002 cents!

I don't see exactly where JCDecaux claims to still be the largest display advertiser overall. In their 2011 report, they seem to add conditionals which limit it to transportation:

"With a massive presence, JCDecaux is the leading outdoor transport communication company in China."

"In China, where it is the leader in transport advertising, JCDecaux conducted the first audience measurement study..."

Then there is this:
"In 2005, we became the leader in outdoor advertising in China, by making three acquisitions, thanks to which we rapidly gained a significant presence in the metros and on the buses of major Chinese cities." There is no mention that they remain number one. Even in the 2008 report, they are making EUR 322m (say USD 483m) for the entire Asia-Pacific region, while they have Focus at USD 524m. 2005 was when Focus's major acquisition and consolidation effort was just getting started.


It seems their claims are limited to the transport advertising, in which Focus Media is not involved. Clear Media's "street furniture" is limited to bus stops. Vision China and AirMedia are both focused on transport areas.

I remembered asking this question to one OOH executive in China ( not related to FMCN) last year.

He said the reason that FMCN is excluded from JCD's list is because FMCN is more in the indoor advertising ,ie. in-elevator platform . Which is not a direct competitor to OOH section of FMCN

One way to test the thesis... In the 20-f they say no single customer accounts for more than 3% of revenue and list the top customers as Mengniu Dairy, L’Oreal China, Yili Dairy, P&G China, Beingmate, Dongfeng Yueda Kia, Volkswagen Shanghai, Dongfeng Automobile, FAW Volkswagen and Yum! China. That implies one of these companies is likely representing over 2% of revenue or USD$16mm. Perhaps you can crowd source this info via your blog from anyone who may have contacts within the marketing department of these companies. Also, those are 10 quick phone calls for the due diligence team...

My only reservation with this trade is that, what if the company is overstating margins & profits, doing dodgy things like calling posters LCD screens etc. but there is a profitable, albeit smaller scale, business underneath that.

That may not pass the test for Carlyle, who may end up walking away from the deal, but what about all the other parties involved? I don't see how guys like Citic Capital or China Everbright would mind still doing the deal. After all, everyone said Harbin Electric was a fraud, and Abax Capital (an MS seeded fund with decently high profile finance professionals) + company's CEO ended up taking the company private. Even if Carlyle backs out, the other guys probably have the ability to invest more and close the deal.

Just doing a spreadsheet to figure out the amount actually owned by different insiders is quote interesting......

Does anyone know if China Media Express ever actually operated as a real company. It had a major investment and board member from Starr Investments (AIG Greenberg's investment vehicle)and it had a big 4 auditor. It's website still functions. How did it fool so many people for so long? I have never read a post mortem on this company. If it was real, does it still operate?