Diamond foods - what the press releases says and does not say...

Diamond Foods is a short-battle-ground stock. Anyone who looks at Herb Greenberg's twitter feed can see that. Herb loves battlegrounds.

Today the company made a repetitive press release that has me reading between the lines. Here is the guts of the release:

The Board of Directors is taking a number of corrective actions including the appointment of a new Chief Executive Officer and Chief Financial Officer.  Effective immediately, the Board has appointed Director Rick Wolford to serve as Acting President and Chief Executive Officer and Michael Murphy, of Alix Partners, LLP, to serve as Acting Chief Financial Officer. The Company is commencing searches for permanent replacements for the CEO and CFO positions.  The Board has also appointed Robert J. Zollars, who previously served as Lead Independent Director, to the position of Chairman of the Board. Michael J. Mendes and Steven M. Neil have been placed on administrative leave from the Company.

I have read the whole release - but there is no additional information.

I know relatively little about this company - indeed I did not bother looking because the short was crowded and the product (Kettle chips and walnuts) seemed OK. But this release had me puzzled.

The offence as described - moving $20 million of expense from one year to another in one year and $60 million in another year seems relatively minor. But the sacking of the CEO and CFO and the appointment of Alix Partners seemed less minor.

The last 10K (since amended and now withdrawn) shows nicely growing income in excess of $50 million. 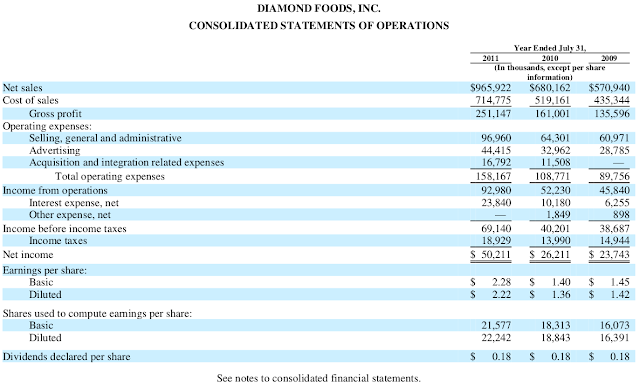 That is pretty nasty. But not terminal. Still there are 21 million shares outstanding and at the after-market price ($21 down 42 percent) that is still 20 times earnings.

It does not look like a salivating buy at 20 times. Not close.

And the loss of the CEO and CFO does matter. There is seldom only one cockroach.

The thing that gets me though is the appointment of the new CFO. Michael Murphy is from Alix Partners and his CV makes it very clear that he specializes in restructuring debt. Alix do a lot of bankruptcy work (though that is not the only thing they do).

The last balance sheet (also since withdrawn) is amusing. 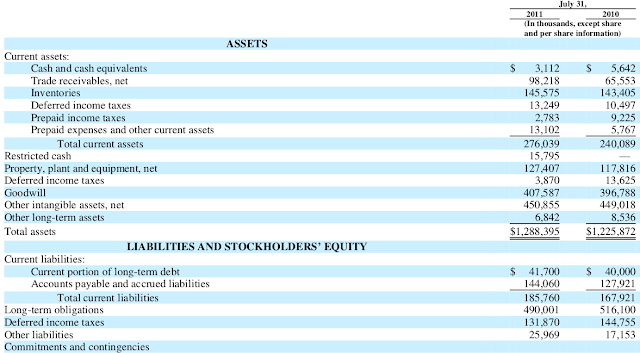 It shows cash of just over $3 million, some short term debt and long term obligations of nearly half a billion dollars. And - given the restatement - we can guess this thing only earns just over $20 million a year - and even that presumes the absence of further cockroaches.

I shorted some in the after-market. Don't do that often - but am quite pleased with myself.

Damn you John, I was just drafting a blog post, that states the SAME points you just made. ARGH. In the interest of avoiding redundancy, I will stop, and simply link your blog post to mine :)

I get the logic of reducing previous years' profitability given what the company disclosed. But assuming (for now) that the offense is just timing related - shouldn't profitability be higher by that same number in some period, perhaps the next twelve months? Shouldn't net income even out over some time period?

Only problem - 20 million on over half a billion of debt - that looks bad to me. But then I am old-fashioned credit kind of guy.

If it were unlevered - then I would be more comfortable.

Thanks for the explanation. Seems almost hard to imagine that profitability would stay in the 20mm range per year when revenues are up substantially over those 3 years.

They bought stuff. They overpaid.

No increase in profitability after interest and tax - well some - but not enormous.

Scanner data seems to show the retail brands (esp Kettle) kicking butt. Is there really not a few hundred million of value above the debt?
It seems to me based on restatement plus recent massive price increases at retail nut business that walnut profitability has been extremely poor; is this a business they want to stay in?
They need to remedy the technical default on covenants and worst case they issue a bit of equity. It doesn't seem to me that full restructuring is necessary. In the teens, I am intrigued on long side.

if that's your definition of 'worst case,' you haven't worked in finance for more than 6 months.

John, I think you may be mistaken.

DMND specifically stated that FY 2012 guidance included that $60 million payment...so no payment in fall 2012 means that guidance would be raised.

How is your short position on TSL doing?

Surely they can simply securitize the goodwill and intangible assets and thereby service the debt.