This will be the first on a series of posts about Fannie Mae and Freddie Mac. I expect my conclusions to be controversial. One reason I have been quieter than normal on the Bronte Capital blog it is because I am working on this series.

The lack of analysis in the public domain

I write this series in the face of genuine press and public surprise at the relatively good results of Freddie Mac. I am not meaning to sound boastful, but I privately predicted those results quite accurately. This series will explain how I got to that prediction – and where Fannie and Freddie losses go from here.*

Fannie and Freddie traditionally insure qualifying mortgages. These are mortgages with:

These mortgages were never very risky – and to date have caused very few problems (although Fannie and Freddie are provisioning for enormous problems that will come).

I can demonstrate this.

At the end of 2007 Freddie Mac had $26.7 billion in common stockholders’ equity and 14.1 billion in preference shares outstanding – a total of $41.1 billion in capital.

By the end of the first quarter all of that capital had been wiped out – and in addition the Freddie Mac needed a capital injection of $51 billion from the Government to maintain positive net worth. Over $91 billion in capital evaporated. 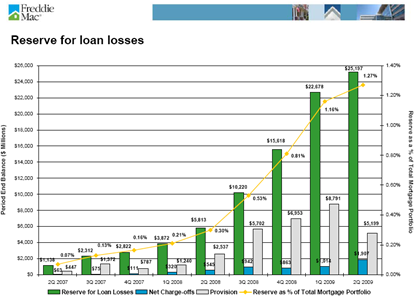 Cumulative losses actually realised to date are simply not large enough to have caused problems. $5.8 billion was well within the previous common shareholder equity. If that were all the losses it would have been lower than the operating profit of Freddie - the company would have never been loss making. Whatever, it is nowhere near the $91 billion of capital that has evaporated.

Even provisions – whilst large at 25.2 billion do not come close to explaining the total losses.

I point this out to observe something obvious – but hardly commented on in the public debate. The traditional role for Fannie and Freddie – guaranteeing traditional qualifying mortgages - did not (or at least has not to date) caused losses that are in any sense unmanageable for the system.

If this situation continues it strongly supports the view that Fannie and Freddie can be bought back in their traditional role with relatively few risks to the public purse.

That is a big “if”. There are plenty of people including some journalists I respect a great deal such as Peter Eavis who are convinced that these losses will wind up being enormous. Peter is however working in the same “model-free” environment everyone else is. In a later post I will model losses in the traditional business. In other words I will try to predict the future…

That should be easier – it is almost always easier to explain the past than predict the future, but even then the conclusions will be controversial.

*I was not the only person to predict this. I have only once censored a comment on on the Bronte Capital blog because it was too close to what I was thinking and stole my thunder. The last post in this series will reveal that comment and explain why I censored it.

Post script: Peter Eavis has replied in the comments to this blog suggesting that I ammisrepresenting him. He does not necessarily think the losses will be enormous - but he does think it unlikely that they will repay the government senior preferreds.

This post is reproduced on Talking Points Memo. The TPM readers can find Peter's comments on my blog by clicking this link...

John,
This is Peter Eavis. Yes, we have had a long and good relationship when it comes to discussing important subjects like this.

First off, I never predicted enormous losses. Losses will be big compared to the wafer thin capital F&F had going into the crisis, which is one reason why the government has had to sink so much in.

But the bigger issue for you to prove is this: Can these two earn enough over the next five years to do two things:

I just don't see the earnings -- even peak earnings couldn't do this.

So you must be expecting some pretty hefty forebearance in the part of the government, which there is no political backing for, as far as I can see.

Indeed, your point about whether this model has a future is very hopeful. Larry Summers has long made it clear that he doubts the public-private Frannie hybrid.

Lastly, there is no need for them, as the FHA can do everything they do without the public-private headache -- and is doing so, judging by the growth in Ginnie Mae's balance sheet.

Check the cost of the borrow on Freddie shares and you will find a reason why they are ramping -- short squeeze. These eventually end.

Cheers -- and look forward to your reply.

This comment from another blog is germane to this:

Freddie Mac actually reported that they earned money in its most recent quarter,to the tune of some $ 768 million. The stock had a huge gain of about 73 percent.

One analyst with whom I spoke questioned the euphoria which the report of net income sparked.

There was also a significant benefit from an accounting treatment of losses on “temporary impairment” of securities values. The GSE noted an impairment of $ 10.5 billion but only $ 2.5 billion made it to the income statement. My interlocutor said that this was all quite proper (according to accounting canons) but he thought that when folks delved into the entrails of the statements that they would find it troublesome and less than inspiring.

I am buying FRE, I don't care how they get there, but the banking sector has seen it's run up due to the government's support and fixing, I'll put my tax payer dollars to use and see amazing returns with FRE also. Buying FRE for the next two quarters, housing bottom seems to have been reached and going to see stronger quarters than this most recent to come.