I have to welcome a few readers from Talking Points Memo.  They are reproducing my posts at least to the extent that they go to explaining banks and the financial crisis to a policy/politics driven audience.  Given the purpose of the Bronte Capital blog is primarily to explore investment ideas the policy/politics wonks at TPM might find my posts a little odd.  [My purpose is largely to make lots of money.]
Nonetheless I do have things to say which I think are important from both an investment and a policy/politics perspective.
To this end I want to explain why I do not think the American banking system will wind up looking like the Japanese banking system at the end of this crisis – and what the implications of that are both in a policy and an investment sense.
To start with thoguh most American readers have no idea what Japanese banks look like.  So I will repeat the second substantive post on this blog – a post which looked at 77 Bank – a regional bank in Japan.
Next week I will do a post which explains why American regional banks will not look like 77 Bank at any time in the next twenty five years.  So enjoy a post that is almost a year old.  I have annotated it where appropriate.
Old post - originally titled "Japanese regional banks - a mirror on America"
77 Bank is a regional bank in (the capital of Miyagi prefecture). The Japanese guys I know think of as a backwater – a place where the “cool guys” hang out on motorcycles wearing purple clothes. Economically it is just another rapidly aging backwater where the young (other than those that hang out on motor cycles wearing purple clothes) are moving to . 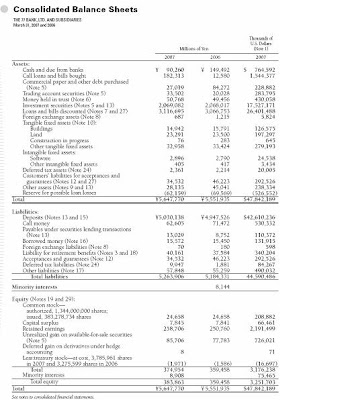 Note that it has USD42.6 billion in deposits. This compares to $35.8 billion for Zions Bancorp – as close to an American equivalent as I can find.  [Disclosure - I had been short Zions Bank at various times - but not for the great collapse in its local commercial property market.  I lost money.  I thought Zions modestly risky - but it wound up very risky.] 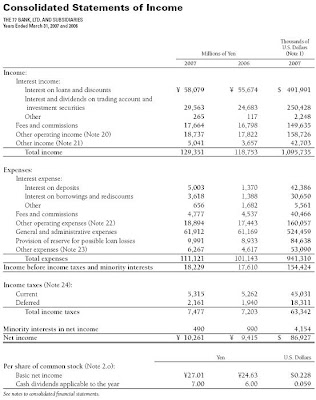 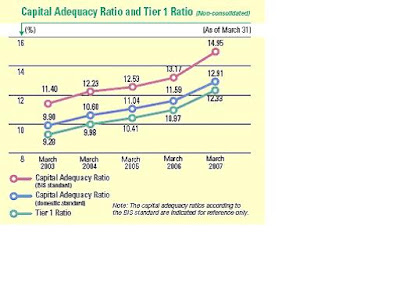 The basic call that the global savings glut was not going away was right.  The global glut of savings - which found its way into endless dodgy subprime mortgages and other problem loans - still exists.  Chinese people still save to excess.  Americans are saving more.  The fundamental imbalance that drove the world financial crisis is still there.  It is not obvious how that is fixed.

Japanese banks however have found that low margins are particularly dangerous - as there is little profitability to offset losses (even small losses).  And Japanese banks are now having losses.

Insightful. Thanks for your perspective.

I wonder, what did net interest margins look like in Japan as their bust took hold in the late 80s/early 90s? Did they initially experience the same type of wide margins currently enjoyed by American banks, or were margins already thin?

As you allude to, Americans are retrenching. It seems to me that we could be looking at a long period of increased savings and reduced borrowings.

If the trend continues, won't American banks be subject to the same shrinking margins that have now long affected the Japanese?

It's intriguing how everyone is so fixated on the banking problem here in America and in Japan. I agree with you that the banks in Japan are different than the banks in America, but that is primarily due to the fact that our consumers are so different.

That's what bothers me most about this whole mess. It's actually a consumer problem, but everyone thinks it's a banking problem. In Japan, the credit crisis actually only lasted about 18 months. What persisted was consumer weakness and a lack of borrowing. That's what really has dragged Japan's economy down for 20 years.

But here we are bailing out bankers and trying fix the banks while the consumer continues to struggle. Are our consumers different from Japans? Yes, we are entering this crisis with far less savings. Can we continue to borrow in perpetuity? No.

"77 Bank is a regional bank in Sendai (the capital of Miyagi prefecture). The Japanese guys I know think of Sendai as a backwater – a place where the “cool guys” hang out on motorcycles wearing purple clothes. Economically it is just another rapidly aging backwater where the young (other than those that hang out on motor cycles wearing purple clothes) are moving to Tokyo."

The guys you know can't be connected with the electronics industry, the advanced technology end of which is gravitating to Sendai, due to cheap land and housing, an urban lifestyle (culture, not agriculture) and a plentiful supply of graduates from one of Japan's leading universities - Tohoku University.

The general point is a good one, though, as the electronics industry won't be financing R&D investment through Bank 77.

Actually the Japanese guys I got that from ARE in the electronics industry (Kyoto - which I guess is Japanese Silicon Valley).

And they just saw Sendai as a cheap place to get things done and most importantly at the end of a bullet train line and hence having great transport.

John, isn't it true that the recapitalization of american banks (BAC and WFC as example)is currently being driven by the very low (essentially 0) short term interest rates. We now have a steep yield curve and therefore margins are gross and expanding. If this is the case then how can it be that a very low interest rates the deposit franchise is worth less....shouldn't it be worth more if I can grow deposits are essentially '0' rates.

2nldy, with respect to 77 bank. could they not improve their earnings by investing in higher rate investment vehicles globally with a currency hedge to take advantage of their very low fuding/deposit costs?

I have a couple of questions about the savings glut.....

Doesn't the deleveraging that is going on in the world make the savings glut less of an issue?

Wasn't it the savings glut on top of the leverage that caused the problems?

And with the decrease in asset prices, the ability to borrow against those assets is diminished, making the savings glut less of a problem, no?

1. Quote "And they just saw Sendai as a cheap place to get things done and most importantly at the end of a bullet train line and hence having great transport."

2. Sendai is said to attract an above average non-Japanese population compared to other Japan urban centers.

3. Non-confirmed information is that 77 Bank has a link with Bank of America and personal finances are easily managed between the two banks.