Goldman Sachs just put out pretty good results and did a big capital raising.
Here is a table for Goldman Sach’s revenue for the three months ended Feb 2008, Nov 2008 and March 2009 respectively.  The table comes from the 8K dated 13 April 09 – essentially the 8K in which they announced results to raise money. 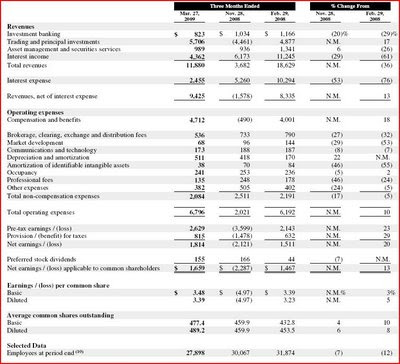 (click for detail)
Now the observant amongst you will notice that these three month periods are not contiguous.  Indeed the three months to November 2008 and the three months to March 2009 conveniently forget the month of December 2008.
That is right.  Goldman Sachs changed its balance date – and there is a one month period not reported in the usual quarterlies.  An “orphan month”.
Now December 2008 was a pretty bad month.  Probably the worst on record.
Here – also from the same 8K is Goldman Sach’s revenue during the orphan month. 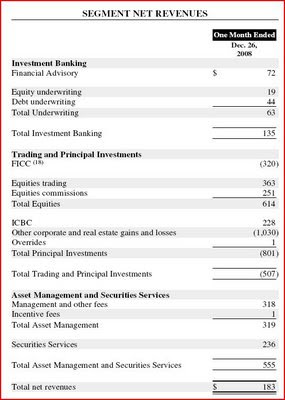 It is hardly linear.  Total revenue for the three months ended March 2009 was 9425 million.  For the one month it was 183 million.  Of course this revenue was offset by some very large charges rammed into the orphan month.  If you click on the attached table you will find that Fixed Income Commodities and Currency (FICC) revenue refers to Note 19.  Note 19 says blandly that it “includes the writedowns of approximately $1 billion related to non-investment-grade credit origination activities and approximately $625 million (excluding hedges) related to commercial mortgage loans and securities”
Ah – that explains it.
There is also another billion in losses labelled as "other corporate and real estate gains and losses".  That line doesn't even occur in the March accounts.
The costs are also non-linear – but not as non-linear as the revenue.
The net loss applicable to common shareholders for the orphan month was just over a billion dollars.  The four month period was just profitable.
Am I surprised that Goldies had an “orphan month” and stuffed the bad news in it?  No.  If you were – then obviously you are new to investment banking.
But I am surprised at the credulity of the press.  Most stories about the quarterly result simply omitted the December month.  This story though at the WSJ Deal Blog was considerably better – noting that December was really ugly but not understanding why.
They even note that December is seemingly omitted from the official records – but doubt it is deliberate.
The Deal Blog is more observant than most.
But perhaps they too are new to investment banking.  Note 19 explains about half of it.  The mysterious "other corporate and real estate gains and losses" explains most the rest.
Post script:  The excellent Floyd Norris (New York Times) also picked this up.   There are some journalists way better than average.
Further postscript:  Krugman has also commented.
Posted by John Hempton at 1:12 PM

Now, where did the AIG money go?

It did not go to Goldman Sachs.

I believe those counterparties to be life insurance companies.

In other words the AIG bailout was ultimately a main street bailout.

Now that is more favourable than you will hear on most blogs.

With the mainstream press and blogosphere so credulous, I guess you can imagine it pays off to pull tricks like this with your accounts.

So, without the fees from "unwinding" it would have been a lot worse?

Interest income is down year over year, another weird one...

Main St is the life insurance business. Going through the iterations....

john, they booked a 850mio loss on lyondellbasell loans in dec. which i think is when the company went broke, but i'm not 100pct sure.
best

To CNBC's credit, they mentioned the absence of December for GS this morning, and mentioned that it was a baaad month. Then it was back to blah blah blah.

john...you don't know what you are talking about. why don't you actually look at an sec filing every once in a while instead of cherry picking and taking things out of context?

no matter, you're just another lemming.

I've seen a lot of posts that the lost month was mandatory and it had been known for months. That may be, but to me the point is that they surely tried to juggle losses to Dec and revenue to their new Q1 so they could crush earnings and get their secondary priced. I'm not saying conspiracy, I'm just saying this should have been more obvious to people.

So when WSJ says they doubt the move was deliberate, then sure, it probably wasn't a well orchestrated scheme. But I'm guessing Goldman took full advantage of this opportunity.