From the wonderful vaults of General Electric

You need to do something special to get into the GE Annual report.  Ordinary revenue producers do not get a photo.  You need to be special.
And so – with a sense of foreboding – I give you an image from the 2005 GE annual report.  I do not have a soft copy because this report was restated and GE does not keep a soft copy on the web.
So I scanned it. 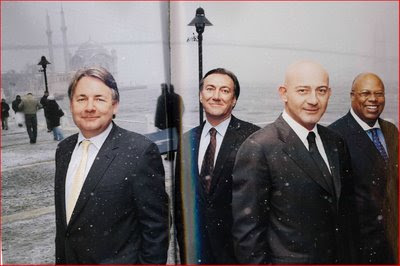 The image I think is Ortakoy Mosque and the Bosphorus Bridge.  Turkey.  I have never been there so I stand to be corrected.
Snow on the Bosphorus was a memorable image and I doubt I would have remembered the photo without the snow.
The likely lads in the photo are Charles Alexander, President of GE Capital Europe, Ergun Ozen, Chief Executive Officer of Garanti Bank, Ferit Sahenk, Chairman of the same bank and Dmitri Stockton, Chief Executive Officer of GE Consumer Finance, Central and Eastern Europe.
Central and Eastern Europe - and Charles Alexander's UK mortgage business are amongst the main areas of concern of people shorting General Electric.
The last guy (Stockton) at least is still in his position.  This is either a darn good sign (he hasn’t blown up and was really clever avoiding a freight train) or a darn bad one (he has blown up – but the powers that be haven’t worked that out yet).
Informed comment wanted.
Posted by John Hempton at 6:22 PM