The comments have proved to my satisfaction that the effect noted here is an artifact of the lens and not a crescent of Venus.  So the discussion here is faulty.
Thanks to the person who put up the comment.  The issue is that there are simply too many pixels in Venus...
However I am left perplexed as to why Venus pixelated as a crescent - with the lit side tilted towards the sun (as you would expect) and Jupiter and the Moon look like circles (the moon) or squares (Jupiter).  If someone is able to give a good optical explanation I would appreciate it.
Meanwhile I will try to replicate the Brad Delong picture with a mobile phone camera and a 10 megapixel SLR.
John
--------------------------
Brad Delong has a photo on his blog taken with an iphone of the moon, Jupiter and Venus.
It is impressive – and through it – looking at the individual pixels – you can tell that Venus is a crescent.
Now all Galileo did – which marks him as one of the greatest minds of all time – was look at Jupiter through a simple telescope and plot the four moons (I have never been able to resolve more than four moons).  And if you do this regularly – certainly every evening for two or three weeks – you will come to the conclusion that the moons circle Jupiter.  Galileo’s letter to the Prince of Venice is here and an English translation of the text attached to the diagrams is here.
Galileo did not distinguish between the moons and stars – the notion that the sun was just another star far out in the uncharted backwaters fo the unfashionable western spiral arm of the galaxy was beyond him.  But he did work out that the “Medici Stars” revolved around Jupiter and that was a major challenge to the authorities.
The second great Galileo experiment was to work out that Venus revolved around the sun – and for that he took observations in the morning and the evening for considerable time – observing the crescent shapes.
And Brad Delong has shown you can do that with an iphone.
Here is Brad’s image 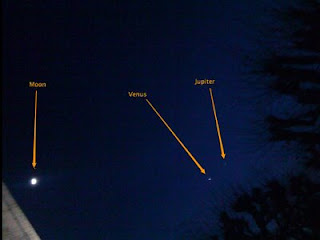 – and here is an expansion of the pixels of Venus. 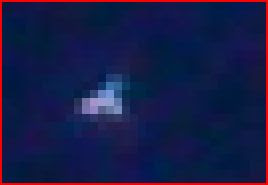 When technology that good is easily available the excuses for basic scientific ignorance are becoming thinner and thinner.
Now to take the eight year old out with an iphone and teach him some real science!  There are few excuses...
John Hempton
Posted by John Hempton at 10:03 PM

Learn? we're too busy being entertained by television.

Northern hemisphere here. I got a great view of Jupiter last summer here, 5 months ago.

John, before you get too excited, please let me inject some doubt into your conclusion. I am not an astronomer, but know from my astronomer friends that "seeing" Venus as an object (vs. diffraction pattern) is something of a sport for them. The fully dilated pupil can probably not resolve Venus. See for an old discussion http://adsabs.harvard.edu/abs/1916PASP...28Q..86C

The Eye-Phones I have seen have fairly small lenses (crappy apertures), much smaller opening than the human eye. If you have the data you can plug it into the equation as discussed at
http://en.allexperts.com/q/Physics-1358/light-physics.htm

Summa Summarum, I doubt what your enlargement shows is more than an artifact. But maybe a real astronomer could weigh in?

On an unrelated note, have you seen that the krona has *appreciated* by 20% since the managed float began on the 4th?

Turns out the rules of the "managed" part are - you can *buy* krona, but you can't *sell*.

The offshore rate around the world is steady or declining slightly at around the 300 to the euro mark.

I very much doubt that what I am seeing is an artifact as suggested by IF - the crescent is in the right direction relative to the sun.

I will repeat the experiment with an iphone and see if the result repeats. If not - then I will withdraw this.

Actually there is an excuse for not taking the eight year old out.

We were walking back from the beach at the weekend and he was getting creative. He called me a "fat mutant zombie bloodsucking freak".

Any clues on how you deal with that?

Let me try again. We know the size of the moon from earth is about 30 arc minutes while Venus is about 1 arc minute (under best conditions) in diameter. See:
http://en.wikipedia.org/wiki/Angular_diameter

I zoomed into the picture that you provided and I counted the diameter of the moon as 15 pixels (18 being very generous). Venus on the other hand "appears" to be 5 pixels diameter. We know it should be not larger than 15 pixels/30 = 0.5 pixels in diameter. All you see is an artifact. A good lens on an SLR with tripod might give you a crescent under good conditions.

While searching for MTF diagrams of the iphone I ran into this really cool looking software: http://www.quickmtf.com/
I have not had a chance to play with it yet, but it is free.

With regards to junior: Isn't this just Australian for "You are a cool dad"? (Sorry. Don't have kids.)

Its funny though - because Jupiter does not have a crescent effect in the photo - so the lens has somehow distorted Venus in the right shape in the right direction (the crescent really points towards the sun).

You can see the cres quite easily with a good pair of binoculars, and with a 5inch telescope (which I own) it looks actually smooth...

I concede to IF here on the maths... so can someone explain why Venus looks this way and Jupiter does not... nor does the moon...

Is it just a complete freak...

Before you get too deep into it, notice that this image has strong jpeg artifacts (blocks of 8x8 pixels, the Venus "crescent" could be aligned with such a block, but it is not perfect). You might want to ask Brad for the original (hopefully png or another lossless format).

But what I suspect is: the image was taken as a fairly lossy jpg. First set of 8x8 blocks result. Then it was cropped (not along 8x8 boundaries - which makes next encoding have even more loss/block effects), annotated with the arrows, and encoded fairly lossy into jpg again. You can see that the arrows/text pixels are fairly noisy.

I have not much to say about Jupiter, except that it is fairly faint compared to moon and Venus.