By no means the scale of Madoff

A while back I went looking for a new name for a fund. In passing I came accross New World Capital Management - the most intriguing hedge fund you have never heard of. The fund was run by someone who called themselves Greg Duran - and who hailed from New Mexico.

Their record was unbelieveable. Below I have extracted from their marketing materials the records for their two funds. The equities fund monthly return is below: 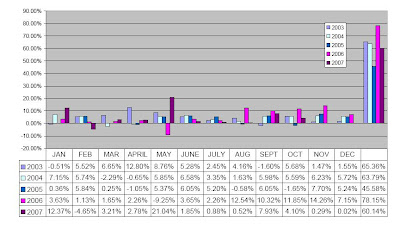 The return for the multi-curreny fund is below: 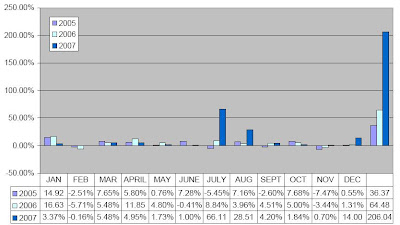 In both cases you should click for more detail - just to show how truly extraordinary these returns are. In July 2007 the multi-currency fund claims to have scored a 66% month.

It is sometimes said there is never just one cockroach. But the first cockroach I found was a doozy. The annual returns in this table are not consistent with the monthly returns!

In particular the monthly returns in the 2007 currency fund compound to more then the stated annual return. Similar mathematical errors exist throughout their documentation.

Given the very attractive returns listed I figured maybe I could give up the game altogether and put my money with Mr Duran. But of course I would need to do some due diligence.

Mr Duran made this fairly easy. His literature listed (for the currency fund) the Prime Broker as Ikon Global Markets, the auditor as Spicer Jeffries LLC, the legal council as Pillsbury Winthrop Shaw Pittman.

As a basic due diligence I thought that I would approach these firms. In particular the auditor is expected to stand behind the accounts that they sign - so they would be good people to approach.

The Prime Broker's (reasonable) response is repeated below:

Thank you for contacting us regarding this situation. As per our privacy rules, we cannot disclose details regarding client’s of the firm unless directed by the client. IKON is a prime broker for FX trading and acts as a counterparty for FX trades. In this capacity, we do not endorse, verify or audit the returns or claims of any client (individual or fund). If the fund is rated, then you can research their results through the rating agency. You can also ask to speak to their auditor, legal advisor or request further information. I am sorry we cannot be for further assistance and I recommend that you do thorough research and due diligence before you select any money manager.

What Ikon did next however staggers me. They contacted Greg Duran - and I received an indignant email from New World. [If it is a fraud - why tip-off the perpetrator? Confidentiality applied to the customer but not to me.]

The auditor was at least polite - but at first had never heard of New World. It turns out that a partner had discussions with Duran about becoming his auditor - but that no appointment had been made and Spicer Jeffries had never audited any New World accounts. [This was despite New World literature asserting that Spicer Jeffries had conducted such audits.]

I would have assumed that an auditor would want to protect the integrity of the statement "audited by us" and called the police. No such luck. I think they were interested in protecting a potential client.

I started the fund in 2005 with myself and two small investors. We built up a track record up till April of 2007, when we launched the fund LP. We started taking clients accounts in November of 2007. In November of 2007, we hired on Spicer Jeffries to do our audits. Because it is an LP, we have a choice of whether to do an audit at the end of the 2008 or do an audit now. We are in the midst of getting feedback from our current investor base to determine if they want to wait to do the audit or, if they want to do it now. The investor pool has to decide since they are paying for the audit. Now, we started a relationship with Dranger Capital, whom is our CTA and who also gave us notice to the contact you had with IKON's Manager so that they can speak on our behalf.

Does the fund exist?

This is a good question. Greg Duran seems to exist. Indeed he was often good for a quote in the Santa Fe New Mexican - by a journalist called Bob Quick - who seemed to put his stories out that way. Here is an example where Greg Duran is seen (in January this year) backing the solidity of Thornburg Mortgage. (He got that wrong.)

Indeed Quick quotes Duran more than once. Lazyness is the nicest explanation I have - though I rang Bob Quick up and suggested to him that - just perhaps - Greg Duran was the local story. There was no follow up.

I do not know how many people were suckered by New World - but one New York based fund-of-hedge-funds gave him money. They were kind of embarrassed when I spelt out the problems. I do not know whether they have recovered some or all of their funds.

Duran quite quickly realised I was doing a proper due-diligence - and he realised that maybe New World was not a "good fit [for me]". I do not know anyone else who was suckered.

Their website has now gone dead. The phone number that they gave me now rings through to someone called "Dranger Capital". Dranger Capital might be a legitimate operation - but they woud hate to know that the number of New World is being forwarded to them.

I didn't just tip off Bob Quick. I went to journalists with some leading publications. I copied full details to the SEC and to the New Mexico AG.

Nothing seems to have happened.

Due diligence - just a little digging - will save you most errors.

Obvious frauds are not prosecuted. (This was an obvious fraud - and the authorities were told.)

Just because it is not prosecuted doesn't mean its not fraudulent. If you can't verify you should not put your money there.

The website may be gone. The phone may ring to a new venture. But you can still see their logo here.

Full disclosure: this is for amusement only. Had the fund checked out I would have given them some money. But it didn't check out and that was that.

My main interest here is how easy it appears to get away with it. Unless that is changed then the capital markets will remain unsafe and deserve lower valuations.

Fantastic. I wonder how the "less regulation is good" and the "business will police itself" crowds responds to this sort of thing.

On every front in daily life in America the citizens need to know they are really on their own. Not only does the government not care, but there are people out to steal their money without fear of prosecution. The existence of Wall Steet in the broadest sense should be considered analogous to the existence of billion dollar casinos in Las Vegas. Somebody paid for all of that, and it's the investors/gamblers on the wrong end of the deal/bet.

Whenever yet another fraud such as this one is exposed, suddenly, people come out of the woodwork to say that they suspected something was wrong and that the fund had long been under a cloud of suspicion. How in the world, are these frauds allowed to continue while those (who are most critical of others' lack of knowledge)who knew something was amiss just looked the other way?

Says Let It Sink: "I wonder how the "less regulation is good" and the "business will police itself" crowds responds to this sort of thing."

How I respond is this: What good did all the existing regulators do in this case or Madoff's or dozens of others over the years? They provide not protection, but the illusion of protection. The new regulators being proposed will be similarly ineffective. Just a big paycheck for hacks.

As to Anonymous: I suspect most people with suspicions think its probably not a good idea to call other people fraudsters in the public prints. Better to quietly avoid the deal oneself.

I am with Richard on the response to Let It Sink. The regulat-ion/ors did NOT work before. and "steal their money"?? it's not like Madoff held a gun and said 'your money or else...' His investors gave him money without due diligence.
playdumb

So much about Madoff does not add up. The most fundamental question of all is, if this guy could show consistent winning results for decades, with no regulatory issues impugning his integrity, then during a time of extreme stress among his competitors, why would $7 billion be withdrawn? Seems to me that, with his long-standing performance record, his deep list of who's who clients, investors reportedly being turned away, a reputation for possessing more charm than you could shake a stick at, that in times like these money would be pouring in, not exiting.

Consider, then, all things might not be what they seem (which, indeed, is the theme of your post). Thus, the media's coverage might be seen as doing a very poor job of answering probably the most fundamental question of all about the fall of Bernie Madoff: WHY NOW?

Because the FBI tells us $7 billion was being withdrawn? Why do I smell a political rat?

Greg Duran is still in Santa Fe NM, and trying to set up another scam. It's a web-based "Multi-level Marketing" site. He tried to get me to invest, but basic due-diligence brought all this to my attention. I won't go anywhere near it, but I hope otehrs don't fall for this.