As explained in the “modelling post” there is very good reason why you cannot sensibly estimate prime mortgage losses. They are getting worse at an increasing rate.

I didn’t want to make it up. So I asked my readers for guidance. Nobody much helped me – but several people pointed to Jamie Dimon’s various statements on the subject. Those statements come down to Dimon’s broad guess that losses will triple.

We know the trends look awful.

But I have a model. Its crude – but in the face of radical uncertainty it is about the best I can do. So I will present it.

Below is a chart of the type that most thrill me as a bank analyst. It’s a cumulative loss chart as presented in Fannie’s last quarterly results. 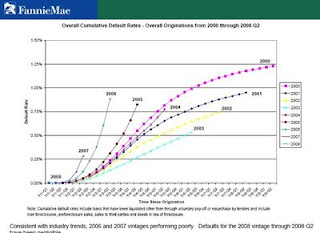 What this chart shows is the cumulative loss on loans versus the time the loan was originated. It’s a sort-of-generalisation of the securitisation cum-loss charts with which I am so familiar.

I have a pet theory as to why the 2007 pools are so much worse than 2006. Its not that the lending was any more stupid in 2007 or that property prices had gone one step too far. It was that there were many bad loans made in all years after 2002 however the bad loans didn’t default – they were refinanced. They all thus wound up in the later pools and hence the later pools preferentially contained the bad loans. They are thus awful.

Anyway Fannie Mae doesn’t give us this data in tabular form – but here is my simple model.

Some notes on the model

There will be a few losses from 2005 and other years – but they are small.

The numbers could be MUCH worse than this – because as I have noted the rate of deterioration is accelerating – which tends to indicate much worse.

They could also be worse than this if the mortgage insurers who are the frontline protection on the high LTV loans fail. [Mortgage insurance is already built into the base line losses.]

There are also a few things that Fannie is currently doing in loan modifications that look like loss deferral and that could further mean my numbers are conservative.

Against this, losses could be better than these calculations because there could be a pig-through-the-python effect in the conventional mortgage market just as I believe there has been in subprime. [Indeed there is some evidence that the 2007 pool is so bad precisely because a lot of bad loans did one last refinance into Fannie Mae. That is proof that Fannie’s management is incompetent. But it would cause a pig-in-python effect and mean my loss estimate for the 2007 pool is overstated.]

But – in the absence of a better model based on better data (something I think the world cannot provide us at the moment) I suspect that there is about 64 billion in excess losses coming through at Fannie Mae.

I am not buying the stock here. If given a guess I would be on the short side – but I can find plenty more to short that I think is easier and more likely to be right than this.

My a-priori expectation was that Fannie was going to be better than that. If you had put a gun at my head and asked me would I prefer be long or short I would have said long.

Now I would say short.

I have no position and it is likely to stay that way. But for once I do not think the shorts are grotesquely overstating their case.

Thank you for coming on this intellectual ride. Its caused me some grief as I have promised you a model which I could barely deliver. And it scares me to pretend I know more about the future than I do about the past and present.

But I have learnt something – and I hope you have too.

To the several people out there (including friends) who just knew in their gut what the answer would be - all I can say is your gut is more knowing than mine...

John,
Thanks for the excellent series. I have learned a lot since finding your blog a few weeks ago.

My feeling is the 2006 and 2007 pools are the pigs in the python. That era was the cumulation (real word?)of high values, cash out, low doc mortgages. However, it is a large portion of the total mortgage pool.

What are your thoughts on interest rates going forward and their effects on ARM resets? It seems the Fed is keeping rates low so that those that desire to keep their homes get a decent reset rate.

Thanks very much for your continued, insightful posts. I wonder if you have made an error in your calculations, though, as it seems that you talk about 2*1.25 being 3 and 5*1.25 being 7.5. Perhaps you meant 1.5 or you are adding in an extra component that is not clear to me?

They were tolerable within ordinary income.

The additional losses would be a fruther 2*1.25 percencent or a further 2.5 percent. So that is where my 2.5 comes from.

This blog is not beyond simple numerical errors. I once left a zero off a calculation and produced nonsense.

So if you still think I am wrong drop me an email...

I think your loss number is high because of the pig-in-python effect, but even if it is not high, I think you are mistaken about the impact on solvency. The losses will not all occur in 1 yr. Meanwhile FNM is bringing in something like 12 billion or so per yr in pre-loss earnings. In other words, if you thought FNM losses were going to be $60 bil but occur over five yrs, FNM would be able to absorb that with no impact whatsoever on its capital levels - it would just earn 0 for 5 yrs. It is an analytical error to take current capital levels, subtract cum losses from that, and draw a solvency conclusion.

There is indeed a lack of reliable estimates for the losses of GSEs though there are a plenty of numbers thrown around. I appreciate your efforts in coming up with a good method and probably you succeded.

However, I have a concern about using default rate as a loss rate.

A default is not a loss. Defaults lead to foreclosures, which could lead to losses.

. All value is not lost in a foreclosure. There is some recuperation.....the foreclosed property gets sold eventually.

Of course there is a scope for improving the loss estimate for foreclosure.

To venture some slight optimism, one might reasonably expect 2000 loans, which have a fairly flat slow of defaults, to be gradual because it was a doom economy in the first ten years and only non-corrolated mishaps tripped up homeowners.

The later loans may have seen a sudden risk in default rates from people unable to hold on after corrolated shocks reducing their ability to pay and holding on as long as they could and then failing. But, now that we may be turning the corner in the economy, the sudden shock may have cleared out marginal people within the prime pool and the survivors of the recession may be better in later years than those in 2000 who weren't culled earlier on.

Good point. In Las Vegas or California, a default probably is a loss, but in much of the rest of the nation it isn't, and even in places where a default is a loss, it will almost never be a total loss on a prime first mortgage.