Getting oil on my shirt: Energy World Corporation

Energy World Corporation is an oil and gas company based in with approximately AUD2 billion in market cap.

As soon as I mentioned it one of my friends who follows the Australian market and is long-only he suggested that there was no point looking at small Aussie oil and gas companies because if you spilt oil on your shirt you could have a market cap of $500 million.

Against his advice I have been playing with oil – and maybe some has got on my shirt.

In a previous life EWC was a developer of project financed power stations burning gas in out-of-the-way locations. It even partnered Enron and (the now defunct parts of) .

It very nearly went bust – and the stock bottomed below 3c. Then stepped in two white knights, James Packer and Standard Chartered Bank.

EWC was left with gas reserves. Not much doubting of that. They are just in awkward locales like .

The gas price is low in .

They burn this gas through relatively inefficient turbines (8666 heat rate quoted – 9000 from appearance) to generate local electricity under take-or-pay arrangements. The revenue from burning the gas can be back-calculated – but it is not large. EBIT is about 12 million per annum - and there is considerable debt.

Here is a picture of the power station: 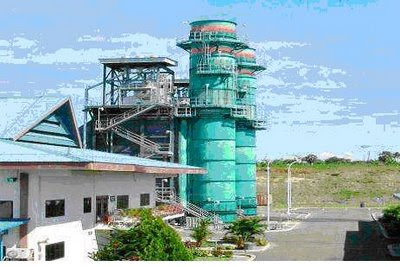 This power station and the gas reserves that support it are the key assets of EWC.

Please excuse the observation – but I don’t see $2 billion here.

That was it for EWC until very recently.

EWC has joined the mega-engineering crowd. It plans to build an LNG plant.

It raised over 160 million through Tricom (a stockbroker with a super-aggressive reputation) to fund this. The purpose of the plant is to liquefy the remaining gas and get a good price for it. They plan on building to 2mtpa capacity – about 100bcf of gas. Reserves are about 700bcf (but there is probably more) and the above power plant (and one other they are installing) will burn about half of those reserves over the next twenty years of take-or-pay contract.

This gas is worth a fortune liquefied. Liquefied 100 billion cubic feet of gas is worth something over USD1 billion. An LNG plant could turn these (small) reserves into a cash machine.

The problem is that LNG plants are VERY big and VERY expensive pieces of kit. Massively so. (an Australian company) and Petronas (the Malaysian company with the famous skyscraper head office) plan on spending almost $8 billion building a 3-4 million tonnes per annum train in Gladstone (QLD). Here is the link from ’s site.

So how much does EWC think they need to spend to build the plant. Well according to Tricom (when they did the raise):

EWC is planning to construct a 2.0Mtpa LNG project at Sengkang in four 500,000tpa phases. The modular construction and the use of off-the-shelf technology from Chart Energy & Chemicals and Siemens should enable the company to keep capital costs low. EWC has estimated the construction cost of the 2.0Mtpa LNG project at US$350M with an additional US$110M in costs associated with the development of the gas field. [Source: Tricom note dated author Hayden Bairstow.]

Oh dear – this runs at roughly 10 percent of the cost of the Santos/Petronas project per unit of gas. Moreover if it can be done that cheaply in Indonesia Petronas (the Malaysian company) should know about it.

I was immediately sceptical. That is my nature. But Siemens says that they received a massive parts order – see this press release. The order was placed by Chart Industries whose 10K confirms EWC as a major customer. Funnily enough a EWC release attaches the Siemens press release but the attached release differs slightly and has a different number. The attached release was never actually released by Siemens.

I am not going to express any positions as to truth – just implications of possible beliefs. After all there is a Siemens release and Chart - a reputable company - does quote EWC as a major customer.

Suppose EWC can produce a 2mtpa LNG train including gas field development for USD350 million. The implications are as follows:

Chart’s website does not place their technology in this range. They have never sold 2mtpa LNG plants.

There is a possibility though that EWC can’t do it. Maybe the note from the Tricom broker on which they raised 150 million is just wrong. In that case the implication is simple:

I will leave that decision as to veracity to you dear readers.

Crawling their files is quite funny ;-)

Annual Report 2008:
Production of LNG from the first modular LNG train is planned for
the last quarter of 2009.

Annual Report 2009:
Production of LNG from the first two modular LNG trains is planned to commance by June 2010.

Annual Report 2010:
Production of LNG from the first two modular LNG trains which was
originally planned to commence in June 2010 has been delayed pending approval from BPMIGAS of a plan of
development for the gas required for the LNG facility from the Sengkang gas field. First production will now likely
occur by First Quarter 2012.