Drink deeply of the poison: another look at Fifth Third Bank 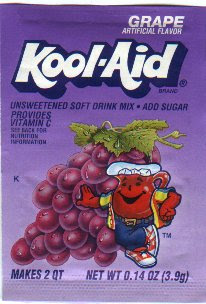 Fifth Third was a well run bank with a cult following. Now it is up on hard times. I have looked at it numerous times with an eye to buying it - but never purchased. I blogged about that here.

I was so blinded by the past glories of the company that I couldn't even make money shorting it.

The true believers however really drank the Kool-Aid. In 2000 it was priced it at 7 times tangible book plus excess capital.

So now I am back having a look at Fifth Third. Investor Relations didn't return my email (which is disappointing) but so far I have positives and negatives.

The biggest negative is location. It is big in tough states - having three of its state concentrations in three of the worst five states for property foreclosure.

The second biggest problem is an huge error of judgement on behalf of the management. They spent a large part of 2007 drinking the Kool-Aid themselves repurchasing $1.1 billion in shares at seemingly low prices during 2007 only to issue a billion in converts at even lower prices in 2008. They paid an average price above $40 a share and issued around $10.

There is a phrase for that. Its called believing your body odour is perfume.

But at the moment I want to accentuate the positive. There is plenty of positive - and some of it reflects well on management.

This post focuses on the origination of mortgages with negative amortisation features and high loan to valuation ratios.

That tends to cheer you up in this environment.

The 2006 annual report was slightly different:

The Bancorp does not currently originate mortgage loans that permit principal payment deferral or payments that are less than the accruing interest.

The "does not currrently" line also appears in the 2005 annual report.

So sometime they stopped originating that sort of loan - and they did it years before the credit crisis broke. In other-words management did not lose their minds as all about them lost theirs.

Another indication of quality management was that they slowed origination of high loan to valuation mortgages much earlier than most of their competitors. They have a category for mortgages with a loan to valuation ratio above 80 percent and no mortgage insurance. Mortgage originations for this were as follows:

The company slowed its origination in this category from mid 2005 and slowed it dramatically before the credit crisis hit. That reflects very well on management. Very well indeed.

So given this - I could drink the Kool-Aid. If you dear reader see good reasons to stop me please let me know. I write this blog at least in part for the comments and emails - and I don't get enough of them.

Meanwhile: memo to IR - its good to return phone calls and emails.