You will have to forgive me a long post but this is one of the most important stories in the world today – and I am groping a little in the dark. Wall Street is currently (correctly) obsessed by Lehman Brothers – but they should be similarly obsessed by Barclays Global Capital. Barcap is a far more interesting and important beast. Moreover the standard hypothesis these days is that Barclays will buy Lehman. See this press report for an example.

If you follow Lehman you should also follow this – just to see how strange this hypothesis is.

I posted my old notes on Northern Rock to warm you up for this. If you haven’t read them read them before reading this.

What went wrong in Banking!

The origins of this disaster lie in the collapse of mortgage margins. mortgage margins have fallen and fallen. The different banks had different responses to this fall. – which was originally a pure mortgage bank – made the most sensible call of all – which was to buy Bank of Scotland. It hasn’t saved them entirely from the crunch – but the shareholders of have done far better with BOS than they would have done alone. RBS purchased lots of businesses in the (with which came a subprime problem). One kind way of describing their behaviour was that they were last seen standing by the side of the road with a sign that read “anywhere but here”. Abbey National gave up and sold itself to . Northern Rock decided to make up the margin collapse with more volume – and we know where that got them.

Barclays decided to become a debt trading investment house. About half of its profits now come from the sort of activity that Lehman does.

This market is hostile to pure debt trading investment houses. Barcap should be having a truly awful time. But the remarkably the management are quite upbeat - declaring their investment banking division profitable - this quote headlining the 15 May trading statement (my emphasis):

“Our 2008 performance continues to benefit from the diversification of our business in recent years. In Global Retail and Commercial Banking, our UK businesses performed well. There was very strong profit growth in Barclaycard and we continued to expand our international businesses rapidly. Our Investment Banking and Investment Management businesses were profitable in challenging market conditions. ”

Pay up for talent

Barclays did not buy an investment bank. There were persistent rumours that they would buy Lehman – but it never happened. The way that they built the bank was to steal whole teams from lots of investment banks – offering what investment bankers respond best to – lots of filthy lucre.

One year they put on a thousand staff at over 250 thousand pounds average salary. That seemed like an aggressive hiring spree to me. The next year they doubled it and I think (but cannot confirm) they continued to expand on this pace. This is a lot of cost base to add to a retail bank with declining margins.

I know they offered guaranteed bonuses – so when they slow this beast down the staff costs do not go away.

Barclays has some good businesses – notably the i-shares that are so beloved of hedge funds. But most of what they do is just looks like a standard debt driven investment bank.

Having employed all these people and told them to trade. Unsurprisingly they did. Now I am just going to extract a few things from the annual reports. Here is the derivatives exposure from the 2007 annual: 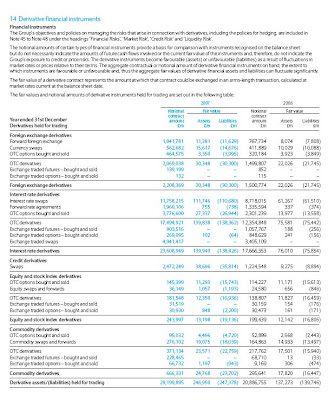 These numbers are as they seem. The total gross derivative exposure is 29 trillion pounds. I deal with banks – but I am not used to dealing in trillions of pounds. I don’t think anyone is.

The gross credit swaps are 2.4 trillion pounds – but mysteriously the fair values (both assets and liabilities) are low. Only the fair values go in the consolidated balance sheet so if you were to mark these like some people do the balance sheet would be much larger. (There is mismarking in someones book - but it may not be Barclays).

The scale of the growth is best seen by looking at the same disclosure in say the 2003 table (snipped from the 2004 annual report): 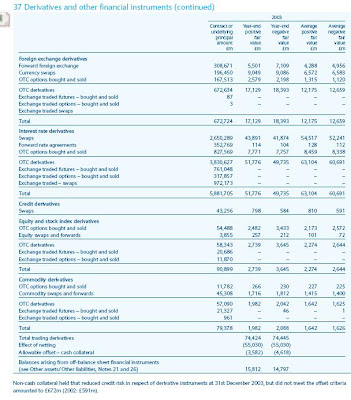 It is not just the derivatives that they grew. The on balance sheet exposures grew to astronomical size too. Here is the summary from the Barclays annual report of Barcap. 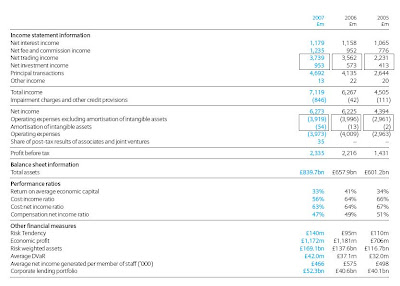 Oh, and you got all this income with a trading team you hired with guaranteed bonuses into the most crazy-for-talent market that has ever happened. When I saw the bonuses some of my friends were being promised - well I wondered why I wasn't going to Barclays.

They were pretty good traders all up too. Unlike anything I do they made money almost daily. Below is the value at risk over 2005-2006 with the number of positive and negative trading days. 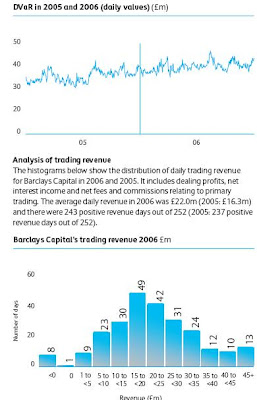 I love this - almost EVERY day they made money.

The histograms show the distribution of daily trading revenue for Barclays Capital in 2007 and 2006. Revenue includes net trading income, net interest income and net fees and commissions relating to primary trading. The average daily revenue in 2007 was £26.2m (2006: £22.0m) and there were 224 positive revenue days out of 253 (2006: 243 out of 252). The number of negative revenue days increased in 2007 largely as a result of volatile markets in the second half of the year. The number of large positive revenue days also increased but these were spread across the year

Oh well - in bad times you get some losing days at Barclays.

Of course it all depends on how you mark the exposures. Barclays held - and continues to hold lots of nasty stuff. Their marks on the super-senior CDOs are implying only a fraction of the problems at Ambac or AIG. How do I put it? When is it mark to model and when is it mark to myth?

They put out a interim trading report. Its here. You look at the marks - and see if they make sense to you. The statement is here (warning pdf).

They got the true subprime thing happening here. They own Equifirst - a true subprime lender. Or at least it was a true subprime lender - it now does FHA loans and the like. They purchased in March 2007 when it was early in distress. They got a few billion pounds of loans with the acqusition that they meant to securitise if the market reopened. Oops.

They got the lot. Just read the appendix to the trading statement. And compare to AIG.

I got much more on this thing. But this is a blog and meant to be light hearted. Enjoy.

Well, at leats this sort of stuff isn't limited to the US -- I somehow feel better knowing its in the UK also...