Lets recap my arguments from the early parts of this series.  In Part 2 of the series I showed that if the Greek sovereign defaults either (a) it leaves the Euro and forces all Greek companies to convert all cash assets and liabilities to Drachma or (b) the Greek institutions including – say National Bank of Greece – will wind up going bust.  In the archetypical sovereign default with a fixed currency (Argentina) not only did the sovereign default – but all private debts got redenominated in Pesos.  I argued the same must happen in Greece if Greece were to default because Greece would want to save their institutions.  Nobody has argued why this won’t happen.  Then again nobody has provided a decent mechanical explanation for how it does happen – we don’t know how to leave the Eurozone even if you want to.

In Part 3 of this series I showed you the balance sheet of Emporiki – the Greek controlled subsidiary of Credit Agricole.  The balance sheet showed 8 billion euro of interbank funding funding the Greek business.   I argued that if Greece went off the Euro those interbank funds would be repaid in Drachma with a loss determined by the post-default trading level of the Drachma.

Every Euro of deposits raised in Greece is a Euro that does not flow across the Greek-French financial border and it is a Euro not subject to devaluation if Greece were to go off the Euro standard.

In my view the real risk to Credit Agricole in Greece is NOT credit losses (their lending has not been outrageously bad).  The real risk is that Greece leaves the Eurozone and the assets and liabilities of the Greek banks are revalued in Drachma.

Into this I want to throw a slide out from Credit Agricole’s recent presentation on how they are dealing with their Greek subsidiary.  They are making a conscious decision NOT to pay Greek interest rates on term deposits – and they expect their deposit book to shrink from 22.5 billion Euro to 15.8 billion Euro.  Presumably they will need to fund another 7 billion Euro from France. 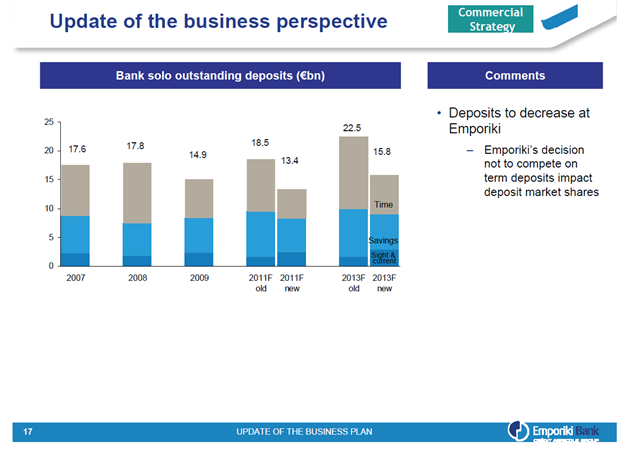 What to call this?  Double or nothing!  If Greece leaves the Eurozone Credit Agricole has almost doubled their losses.  But – if Greece stays in the Eurozone – hey – they make more interest margin for the next few years because they pay cheap French financing cost to fund Greek business.  [Isn’t that how they got into this mess in the first place?]

They better hope I am not right.  If I am I can expect the resignation and disgrace of Credit Agricole’s CEO.  This is a dangerous game.

I predict that a fire will break out in the headquarters building, destroying all the evidence of the CEO's misconduct, and he will be given the Legion of Honor for "services to the unification of Europe."

Any chance they could in the last second send the money back home (the way Lehman London did)?

It is indeed a dangerous game but I see politics here.

French and German banks have agreed with their respective governments to not sell any GGBs, to the ECB or anywhere else. Maybe there's also a tacit agreement to not do anything that would negatively affect any Greek banks, especially ones that are tied to French parents?

As long as the IMF/EU funding for Greece has been secured for 2-3 years, I think Credit Agricole and other French banks are working under the assumption there will be no "credit event" during that time.

Generally speaking, I've learned to never underestimate the determination (and more important) the ability of European politicians to essentially override ugly economic realities. And there seems to be an enormous political will throughout Europe to avoid a Eurozone default by any means necessary, at least for a couple of years.

My take - there will eventually be some sort of "managed" or "orderly" restructurings of Greek debt (as some German politicians have been hinting) a few years down the line, after Greece fixes its finances and generally cleans up its act.

Until then, the banks are to be supported at all costs.

As long as Europe can provide Greece with an alternative that is economically better than leaving the Eurozone, Greece will stay. Because Greece is TBTF and as long as Greece is TBTF, Europe has no choice. Greece is predisposed to take the best option (Europe's offer). Greece having a choice is an illusion.

Besides, sovereign risk is a sunk cost. Europe can either choose to spend a lot of money (its a big problem) on European banks to solve the Greece sovereign risk problem. Or Europe can spend that money directly in Greece to help it recover economically. The later seems much more rational.

This reminds me of a trade some one did a while back. My recollection is a bit vague now. A hedge fund collected a lot of insurance premium by selling CDS against a particularly bad MBS issue repeatedly over and over (buying nake CDS was a popular bet back than). After which, the hedge fund buys out the MBS (or maybe it was the houses in the MBS) and ensured that the MBS will never default. Everyone else end up holding CDS insurance that will never have to pay out.

A key question that hasn't been asked:

How long can Greece maintain it's TBTF status?

When Greece isn't TBTF is when things can go south.

To be honest, a part of me likes Credit Agricole's bet. Credit Agricole making the bet today is very different than similar bets made in 2009. John, your comment "Isn’t that how they got into this mess in the first place?" is not a good argument because timing and new information changed a lot of things.

I thought I clarify a few more points.

Europe spending money to help Greece directly will benefit Greece and consequently benefit European banks and the European economy(i.e. benefit is multiplied 3x). The alternative is Europe spending money on European banks in the aftermath of a Greece default (or Greece leaving Eurozone). However, that benefit to European banks will largely get cancel out by the damage from the Greece default. Additionally, the European economy will suffer from the shock. The net benefit of the alternative is deeply negative. The choice is obvious and will not change as long as Greece is TBTF.

Another interesting point to note is TBTF is the glue that binds the Eurozone together. Ironically, if European banks wish to minimize their loss on Greek debt, they should collectively maintain or increase their exposure to Greek debt! This way, both European politicians and European monetary authorities will have to socialize the loss. Tax payers eat the loss on Greek debt and banks' loss on Greek debt are reduced accordingly.

In my view, it is a foregone conclusion that Europe will socialize the loss on Greek debt. This process will continue as long as Greece is TBTF. Credit Agricole's bet looks pretty good!

For those looking for Greek justice, Europe helping Greece is a carrot and stick situation. Greece is already changing it's social structure for the better and the Greeks are suffering.

TBTF is a MAD way to bring about solidarity in the European Union.

Solidarity is a win-win strategy. I cannot think of a more optimal outcome. Is there one?

I was told that MAC OS is based on FREE BSD which is LINUX flavored?