I once met the CEO of a French regional bank affiliated with Credit Agricole.  His bank was rich and a quasi-mutual – and hence he was only marginally concerned about profits – though he himself was extremely competent and his bank executed brilliantly.  His accounts were in French only.  He did not need to raise money and hence he did not speak English.  He also served the best simple French food I have ever eaten in his corporate dining room – fish carpaccio with a drizzle of good oil, capers, dill, a citrus-fennel-salad and good bread, and I can taste it to this day.  I assure you this is way-better-than-Goldman-Sachs dining.  Life is fun as the CEO of a deposit-rich bank in Southern France.  I have met many billionaires – but nobody who had it this good. 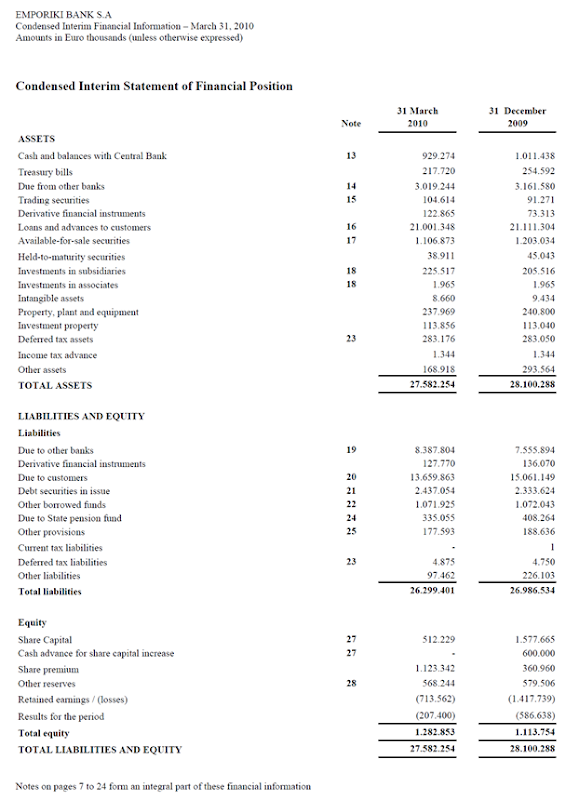 Now this bank is slightly over-lent.  It has loans of about 21 billion, deposits of 13.6 billion.  These are UK or Spanish ratios rather than Greek ratios.  Nonetheless the numbers are small compared to the Greek economy.

The doozy here is note 19 – “due to other banks”.  I figure you can guess it is all due to the French…  last I confirmed it was due almost entirely to the listed Credit Agricole SA.

Moreover this bank is having a bit of a run.  Deposits dropped almost 10 percent in the quarter.  Due to other banks rose by 800 million euro.  Obviously that was more exposure of Credit Agricole Group to Emporiki.  Any run will of course hurt the parent…

Unlike National Bank of Greece there is no critical exposure to the Greek government (only about 300 million Euro).

If Greece decouples from the Euro and forms a new Drachma it is likely that the interbank liabilities will get reformed as Drachma (see my last post).  A relatively small equity value could cause quite large losses – many billions of Euro.  (Assume 30 percent devaluation and they lose 30 percent of the equity – which is trivial and 30 percent of the “due-to-banks” which is not.)

Next time a French bank gets Napoleonic remind them of this.  My French banker-friend should have stuck to eating the fine food.  Leave industrialism to the real industrialists.

Post script – I got one comment too long for the official comments – not mine but worth reporting.  I do not agree – but that will come out later in the series…

John, a few answers/thoughts... I tried posting some of them yesterday (only on NBG) but the text was too long – so here it comes via email (with an additional point on Emporiki).

On NBG, from note 31, ECB funding has increased by around 2 billion; repos with banks have increased by 3 billion; and Interbank (unsecured) seems to be more or less the same.

Moreover, during the first quarter of the year there were definitely cases of foreign banks not wanting to do repos with Greek banks where the collateral was Greek bonds - since the default correlation was so high that the repo in effect became non-collateralised lending. At the most serious points in the crisis, foreign banks didn't want to do ANY repos with Greek banks, whatever the collateral.

As such, I am pretty sure that the further increase of 6bio in "due to banks" shown in the balance sheet of 31.3.10 is all ECB funding; or to be more exact, the increase in ECB compared to the 11bio at 31.12.09 will be more than 6bio, as a large part of the repos with banks will have matured and not been renewed - and hence the bonds will have gone to ECB.

Thus, it's ECB who's very much on the hook in this case; from personal experience I'm pretty sure that German banks (and French and Swiss etc etc – well, except from Credit Agricole or Soc Gen) have VERY low exposure to NBG (or other Greek banks)

At this point, please note that ECB gives cash for an amount up to the Market Value of the bonds pledged (taking the market price into account, and a haircut). So NBG would not be buying at a discount and pledging at par. The only chance of this happening is if the prices of the bonds actually rise; but with spreads at 600bp (up from 100bp in September) what has happened is really the opposite: they've paid 100 (or 95 or 105) for a bond and now they're getting 80 (or 70 or 60) from ECB when they pledge it.

On customer deposits, there were wild rumours flying around the country ("we couldn't sleep due to the noise of the presses where the drachmas are being printed") which led people to do many things - some rational, some irrational. The interesting thing about NBG is that they claimed in the press conference for their Q1 results that in May they had an INFLOW of 1bio of deposits; I know that a (slightly) smaller bank seems to have around 20mio of inflows DAILY since mid-May only from cash deposits (i.e. people who had stuffed Euros under the mattress or in the flowerpots). To me, 500mio a month from cash previously stuffed in mattresses looks as if local sentiment has changed and people are now less receptive to rumours about the “default-and-exit” scenario.

As for Emporiki and the decrease in customer deposits you mention: obviously, some of it was withdrawn (as per above, to be stuffed in cuddly bears and pillowcases). But I hazard a guess that a significant part of it was also transferred to other banks in the Credit Agricole group, temporarily. Many Greek banks had customers transferring cash to subsidiaries in Cyprus or Luxembourg (as you mention at some point); you could walk into a branch of one bank in Athens and open an account in a Cypriot branch of the same bank. And yes, I know that getting your customer to transfer his cash to the mother bank isn’t exactly the same as him transferring to a subsidiary – but still, it’s liquidity that stays within the Group.

Having mentioned the D-word… Two different paths have been mentioned. There’s the first (very obvious) one: all the measures in the world won’t be enough to turn the situation around, or the Greeks will not implement the measures and the Europeans/IMF will grow tired of the whole situation, hence leading to a default/restructuring. The second might sound more surprising: that the measures ARE effective, in a couple of years’ time they generate a primary surplus for the Government - at which point the State restructures its debt (with or without agreement of creditors) to lighten the load for the future. If it’s done unilaterally I’m sure that it will get the ECB (and others) very angry (imagine the amount of GGBs the ECB will own in a couple of years, plus the amounts pledged as collateral) so most probably there will be a big effort to do this through agreement.

Will Greece simply default one day soon? I’m pretty certain not. Will Greece restructure its debt at some point in the next 2-3 years? Perhaps. Will Greece exit the Eurozone? I sincerely doubt it for the next few years: there’s been considerable energy spent on the whole project of European integration in the past 50 years, I doubt the powers-that-be will simply allow the Euro to start splintering. However I can’t say I’m 1000% sure in 20 years there are going to be the same countries in the Euro (or that the Euro will exist).

And of course, there’s always the sunny scenario: the measures DO start working, there is enough of a surplus generated to start paying down debt and things work out well… Some numbers that have started coming out seem more than decent: for example, March Retail Sales up 15% compared to last year (with all the retailers complaining of a drop in turnover). Of course this is not a sign of increased activity but of increased REPORTING: first measure which was taken before the IMF/EU cavalry were called was to make people get receipts from all businesses (by linking the receipts with the tax-free part of their income – long story). Also, one bank’s customers have been making VAT payments for the first quarter which are up around 12-15% compared to the same quarter last year. Has this bank been so successful in attracting the businesses that are blooming in a recessionary economy???? I would love to say it’s so but I doubt it: simply, the businesses are paying more VAT due to reporting of greater activity. And this was before the big increases in the VAT rate.

We’ll see how it goes. These are going to be tough times… but it might just work.

Surely the next time a French bank gets Napoleonic we should remind them of Napoleon?

It seems that of the PIIGS, Ireland is furthest along the process of both fiscal and banking cleanup. The take up on Irish sovereign debt has been decent and bodes well for AIB and BoI rolling over their maturing debt. Any thoughts on Eire?

Emporiki is only the second worst example. Check out the balance sheet and income statement of Geniki which is owned by Societe Generale and you wonder how anyone can keep on holding to this mess. Also, when Emporiki was on sale, all the local banks passed. They were eager to expand but not willing to aquire Emporiki which was considered to be a mess.
By the way, Credit Agricole's Italian track record is not much better...