This post is motivated by my local dead-tree (the Sydney Morning Herald) wasting good column-inches on Kriangsak Kittichaisaree – the Thai Ambassador to Australia.

Once upon a time I unfortunately purchased a stake in Bangkok Bank. The bank – a survivor from the Asia Crisis – is a run really well by a Thai-Chinese family. Its loan book was conservative – and was working through the last of the Asia-crisis problems.

Bangkok Bank’s biggest problem was that Siam Commercial Bank (a bank controlled by the Thai Royal Family) was trying to grow like topsy especially in consumer loans after bringing in some McKinsey consultants who thought that American style consumer lending was exactly what was needed in Thailand. Siam Commercial had imbibed the banking philosophy that was to lead the world to ruin. Bangkok bank was actually run by sensible people who behaved as owners. I never met them – but I suspect I would really like them.

As part of the research I chatted to the investor relations or CFO of every reasonably sized Thai bank. I also chatted to some people at GE Finance who had been involved in the purchase of Bank of Ayudhya.

My problem was that I failed to heed the elephant in the room. Every Thai person I spoke to identified what they saw as the risk - Thaksin Shinawatra. Thaksin was a populist and popularly elected politician who was modestly corrupt (at least by the standard of developing countries) but who had a patronage network outside Bangkok (especially outside the Bangkok elite). Stylistically the comparison (made by many and I do not think too unfairly) was to Mussolini. More fairly he was in the mold of Berlusconi – the richest guy in the country using his power as such to win elections and rig the game in his favor.

Every single person I spoke to hated Thaksin. These were the educated finance professionals and managerial class – people like me. Many of them were liberal-democrats in the soft-liberal sense – really like me. Sometimes the hatred stretched to loopy conspiracy theories – but generally they just thought it was something worth ear-bashing a foreigner for about twenty minutes on. Everybody had an opinion – and it was the same opinion.

The elephant in the room of course was not Thaksin – it was the views of the elite about him. It was a view tainted a little with racism or at least regionalism – with the Bangkok elite looking down on people from the provinces (especially those from Issan whose first language was sometimes Khmer but more often a dialect of Lao and who they would suggest had darker skin though I never noticed the skin tone). [For those who study these things young women from Issan dominate the sex-tourism industry in Thailand reflecting their origin from poor and less educated rural areas. These are not the Bangkok elite.  Rural lightly educated or uneducated poor were the core supporters for Mussolini too.]

Still – as a keen observer of the United States I was getting used to seriously polarized politics. There were plenty of liberals (sometimes liberal-elites) who hated George Bush with similar vehemence. There are plenty in America who hold similar ill-will towards Obama. The big difference was that in Thailand I could not find a single Thaksin supporter amongst the people like me whereas there are many conservative (or more commonly libertarian) people in the American financial elite.

When the coup happened I was not particularly surprised – and (foolish me) not particularly alarmed. After all the people who supported the coup – at least tacitly – were people like me. The military decorated their tanks with yellow ribbons – signifying their loyalty to the King (and hence – as someone who comes hails from a democratic-constitutional monarcy) to some loyalty to the framework of democratic-monarchy. 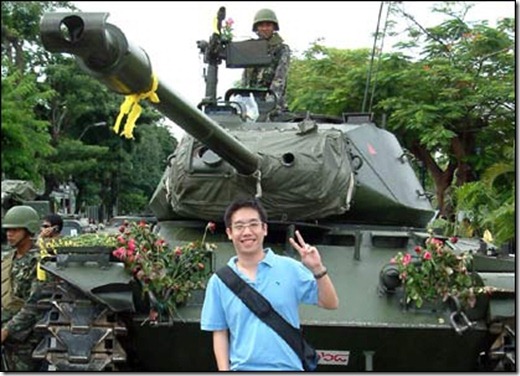 When the Thaksin’s party (the Peoples Power Party) won the post-coup election I suspected we would just get back the same politics minus some of the corruption.

Alas it was not to be. The Orwellian named People’s Alliance for Democracy - the Yellow Shirts who don’t want to accept that Berlusconi (sorry Thaksin) was democratically elected – set out to make Thailand ungovernable if elections were fair. [Remember the occupation of Bangkok airport which did not end with snipers and hail of government bullets.]

But be clear what people like me have done in Thailand now. They have subverted democracy with a military coup and a refusal to accept the result of the subsequent election. And they have shot people that have disagreed with them.

An American equivalent would be if (say) the Tea Party (displacing its predecessor Republican Party) won the US Presidential elections and – like many demagogues – turned out to be modestly corrupt. In response a coup was organised by the displaced elites (Democrats and non-Tea Party Republicans) and Tea Party protestors were subsequently shot in the street.

In most civilised countries the actions of the past-elites would be called Treason. In America the military leaders of any such attempted coup would be court-martialled and receive the death penalty. What is more – even as someone who opposes the death penalty I would shed no tears... the alternatives are Hobbsian.

And that is where people like me have got to in Thailand which is a rather sobering thought indeed.

PS.  If you do not think the Government looks like a collection of liberal-elite then look at on Kriangsak Kittichaisaree’s CV which lists amongst other things a specialisation in law of international human rights at Harvard.  I wonder where they taught him that it was acceptable to be the Ambassador for a Government that shoot in the streets people who want the re-establishment of a popularly elected (albeit corrupt) democratic government.  I look forward to his resignation on principle.

Post script:  many people have complained about my analogy of Thaksin to various Italian leaders.  This analogy is often used by the Thai elite – and is not mine.  The fair comparison I think is Berlusconi – who used his control of the main media to get elected – whereas Thaksin used methods more akin to vote buying.  [My Italian friends – again people like me – hate Berlusconi with a similar vehemence but they would not have condoned a coup.]  That said the Thai Foreign Minister just the other day was using the Mussolini comparison.  I do not want to get into direct analogies of policies – because – frankly they fall down.

From the perspective of the Japanese household

Japanese bonds – yielding close enough to zero – have been a fantastic investment for about twenty years.

After all seven year JGBs were yielding above 1 when I was (unfortunately) short them.  Nominal prices were dropping more than three percent per year.

So the return on owning JGBs was over 4 percent real per year.  Tax only applied to the nominal part of the return – so the post tax return was about 4 percent per year REAL.

Now how long did you need to hold stocks to get a 4 percent post-tax real return?