Heard on the Street takes exactly the opposite view of MBIA credit default swaps as me.

One hedge fund manager also emailed me with the same possibility – that the GICs issued by MBIA (and MBIA) will impact parent company liquidity through cross default provisions.

With Ambac it is easier. Here is a corporate structure of Ambac. 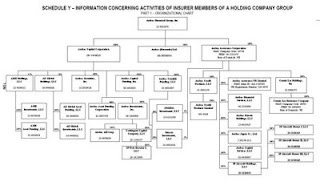 The GICs are written by the a subsidiary of Ambac Capital Corporation – not by the parent. They are reinsured by the main reinsurance entity. After that they are guaranteed by Ambac Financial Group (the holding company).

I believe the same structure applies at MBIA. Indeed this Moody's report notes that the GIC business is carried out by a separate subsidiary. If that is the case then the WSJ is straight wrong. It’s a little harder for me to identify the relevant subs because I have not read the contractual terms of any GIC. If you have such documentation let me know.