I am just back from my summer holidays on the New South Wales South Coast.  To my (mostly) Northern Hemisphere readers I should boast about warm water, perfect waves, beaches in national parks with only one or two pairs of footprints on them and no people, fish that seem to suicide on your lines, etc – but that would just be boring.

In the middle of every day – when the heat became too much and the surf had waterlogged me I read.  On my kindle of course.  And some books which I had never read I read happily made easy mostly by the kindle’s large font options.  One of those books was Alice Schroder’s too long but otherwise excellent biography of Warren Buffett.  There was plenty there – I just want to share a single throw-away observation.

Warren Buffett has a group of his best investing friends get together once a year.  He originally called it the Graham group in honour of his mentor Ben Graham who presented at the first annual meeting in 1968.  By 1991 the group had expanded somewhat to include not only the original fabulous stock pickers but some business luminaries who could help enlighten the group on the nitty-gritty of their industries.  One regular attendee was Bill Gates of Microsoft fame.  From here I will quote Alice Schroder:

After a while Buffett asked everyone to pick their favourite stock.

What about Kodak? asked Bill Ruane.  He looked back at Gates to see what he would say.

Nobody else in the Buffett Group knew that the internet and digital technology would make film cameras toast.  In 1991, even Kodak didn’t know it was toast.

Gates was right of course – and since 1991 Kodak has been a terrible stock – and I would have counted Bill Gate’s comments as “knowledge” in as much as a statement about markets and technology could be knowledge.  But it would be an awful long time before that “knowledge” would be reflected in stock prices.  Here is a graph of the stock price since 1 Jan 1990. 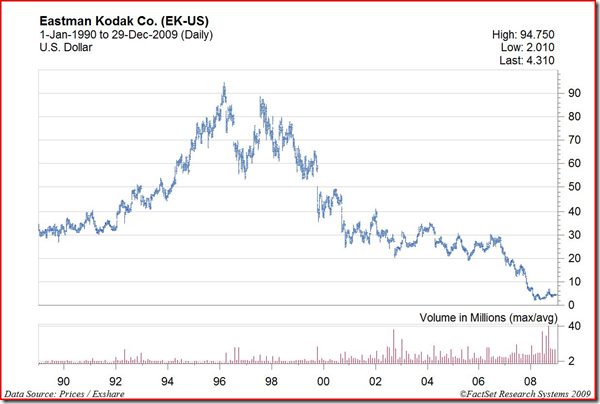 If you had taken Gates to heart in 1991 and shorted the stock then for almost ten years you looked like toast.  If you sold the stock because of something Bill Gates said then you looked silly for six or more years unless you purchased something better.

Indeed if you had the “knowledge” probably the best thing to do with it was to use it just to avoid the photography sector altogether.  That would mean you might outperform the market – but that outperformance was slight.  [If avoiding that sort of catastrophe was your mechanism of making money you probably needed an enormous amount of “knowledge”.]

Anyway there is little question that if you understood the implications of digital photography in 1991 you were – at least on that item – the smartest guy in almost any room.  And it did not help you make (much) money.

The market could stay wrong for a very long time.  Maybe as long as some blinkered academics could continue to believe in strong versions of the efficient market hypothesis.