Dear Michael Clarke, there are worse things you can do than tamper with the ball using sandpaper

Note, as of 20 October the crypto-currency referred to in this blog post is no more and Michael Clarke has dissociated himself from this crypto-currency.

We would like to inform you that the Global Tech Exchange’s (‘Global Tech’) Initial Coin Offering (ICO) has now ceased in accordance with ASIC requirements.
As a result of this Global Tech has issued full refunds to all investors. If you have invested with Global Tech and have not yet received a refund please contact support@gttrade.io.

Global Tech would like to inform you that it wishes to comply with all of ASIC’s requirements and requests, to the best of it’s ability.


Michael Clarke, the former Australian Cricket Captain, must have fallen on hard times.

He is here - late cycle - squandering his reputation on an initial coin offering. 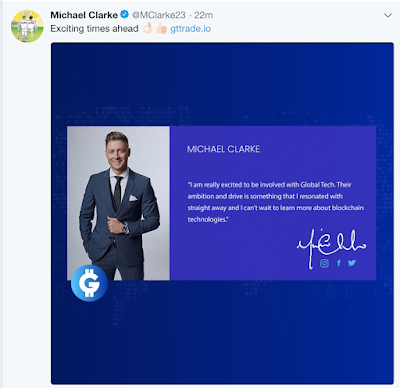 Whether Michael Clarke is breaking Australian law regarding advertising investments with this tweet I will leave for ASIC and their lawyers to decide. But it is pretty darn gutter thing to do with your reputation.

And dear Mr Clarke, cricket is a game where fair play is central. You are tossing your reputation just as surely as if you used sandpaper on the ball.

Which of course your successor as Australian cricket captain did.

Still, when your error was pointed out you just blocked me on Twitter.

Steve Smith at least had the decency to appear contrite.

I will be less forgiving of you.

PS The ICO says on its website that is "Austrac approved". Austrac is the Australian anti-money laundering authority.

Mr Clarke, are you confident endorsing that claim?

PPS. For my many readers from non-cricket playing countries, have a look at the amazing press conference when Steve Smith, Australian Captain, was caught cheating.


I wonder if Mr Clarke will have that decency.

There isn't a Product Disclosure Statement for the Managed Fund.

Things that make you go, 'hmmm..

Sportsmen have forever been promoting bad (or unscrupulous) investments. I'll throw this in the same category as Ricky ("Punter") Ponting and the betting agencies he is affiliated with. We should know better than to take it seriously but I guess it ignores the fact that there will be a segment of the population that are sucked into it which will not end well.

On a side note, Global Tech is such a generic name. I cannot seem to locate anything about this ICO.