Did Mike Tyson ring a bell?

They say nobody rings a bell at the top. But this is pretty good... 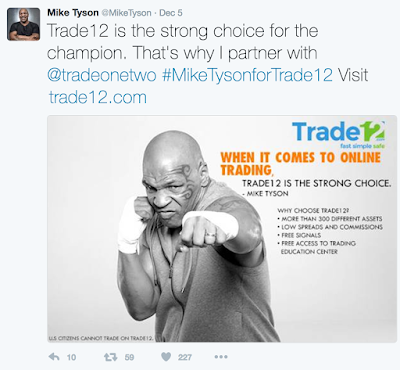 What can you say? I wouldn't like to step anywhere near a ring with Iron Mike - but I would love him as a counter-party.

Trade12 is a bit of a black box. It is - and I am not exaggerating, owned and operated by an Estonian subsidiary of a Marshall Island company and regulated by a private company in Vanuatu.

And according to its literature it does not solicit and accept clients from USA and France.

Which brings me back to Iron Mike Tyson.

Either he trades with Trade12 (which would be illegal) or Trade12 is not "the strong choice of a champion".

I suspect the latter - in which case my fantasy of trading against Mike Tyson is - well - just a fantasy.

"It is - and I am not exaggerating, owned and operated by an Estonian subsidiary of a Marshall Island company and regulated by a private company in Vanuatu". [SNIP}

I'm shocked that a celebrity endorser does not actually use the product!

I thought that the Federal Trade Commission forbade celebrity advertising when the celebrity did not in fact use the product?

Although I suppose Mr. Tyson may be able to trade through an offshore entity, or other vehicle not readily available to the average frustrated US resident.