The Gobi Desert people like their Nu Skin, so do Wild Yaks, Donkeys and Bears

Not all of Western China is thinly populated. Chongquing is big modern city (though I have not been there since 1981 when it felt medieval).

However some of China is very thinly populated indeed. Parts of the Tibetan Plateau are almost as thinly populated as Antarctica. I was flattering when I described them as being for nomadic herdsmen (though Nu Skin is also opening stores for them too).

Here again is the map of Nu Skin's store openings - but this time I have marked a few stores. 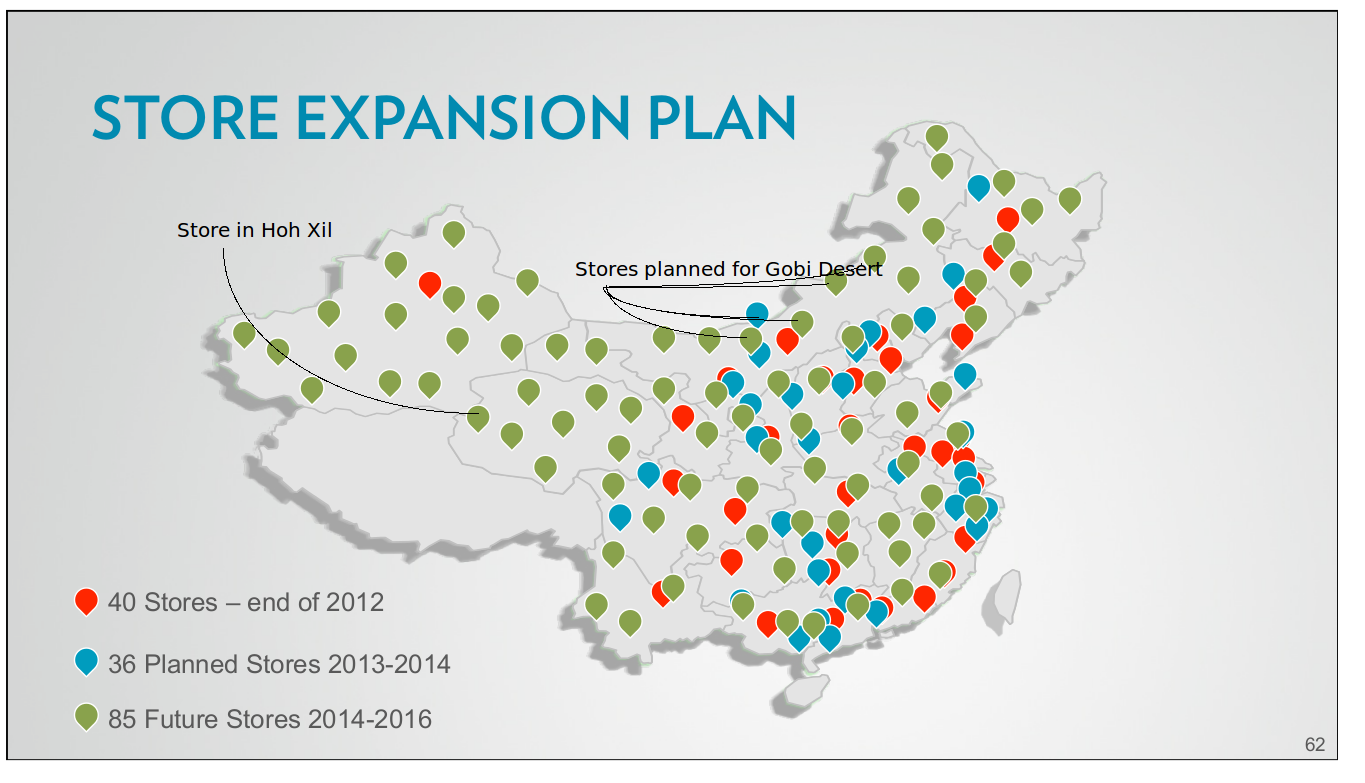 Note the several stores planned for the Gobi Desert. This area is thinly populated - but they are planning multiple stores.

The map shows an existing store in Hohhot (a reasonable sized city). That store is marked in red. The proposed stores do not correspond to any reasonable looking population centres. However as China hands observe - the area has a surprising population density given how infertile it is.

But it warrants a Nu Skin store and a couple more on the periphery of the wilderness.

There are no people in Hoh Xil, so I guess the Wild Yaks, Donkeys and Bears like their multi-level marketing schemes.

There is little chance they will ever open a store in Hoh Xil. A store on Baffin Island is more likely. Indeed many of these marked stores are implausible.

The question arises how did this slide get into a Nu Skin presentation?

There are lots of possibilities. Perhaps it is a mistake as per Richard M. Nixon signing the debt covenant.

Perhaps the Chinese management are having the Provo Utah head-office on. After all if they "build" this store the management could just steal the money. It would be a long time before the Provo Utah team get to visit all these Chinese facilities. This is a company that bought back shares only to breach its debt covenants. That does not speak to good financial controls. This map speaks to further poor financial controls.

At this point I am just speculating. The company issued an 8-K to correct the Richard M. Nixon signature. Perhaps they could also give more accurate store opening plans for China.

Unlike the blue and red dots, the green ones look suspiciously uniformly spread out. There's no area over which they're concentrated. Any chance some random intern was just told to put 85 green dots spread out across everything but Tibet, Taiwan, and Hainan?

The map speaks to amateurish and poorly thought out strategy, I'll give you that, not sure it says anything about financial controls. I wouldn't point out the single point, as much as the nearly uniform distance between green points as though the task on this map was to maximize the distance between 65 spots on the map. An algorithm could hardly do better.

Perhaps the graphic designer simply made stuff up to make a pretty diagram? The only way to make that diagram ultra-accurate is to make assumptions about future locations and put all of those locations into a GIS database (or equivalent). An accurate diagram would telegraph their intentions and possibly make it difficult to acquire the real estate that they want.

John, is that all you have to offer on NUS? Poking into ppt-grahpics? Your forensic skills have been much better!

The map is certainly a little funny. I have no clue what store would be at the confluence of southwestern Xinjiang, Tibet, and Pakistan -- that looks to be in the middle of the Karakoram range, which is served by no major road and is very, very thinly populated. Even if we don't take the map to be literal I can't think of any city anywhere near where it would make sense to open a dot. (Nearby Hotan and Kashgar look approximately represented, but those are probably difficult locations for Nu Skin stores, too, due to the lack of a relatively wealthier Han population to market to.)

This may be a reflection of sino deal realpolitik:

if they haven't actually figured out where, specifically, it would make sense to build the new stores then the proposed number is completely arbitrary and the map is a lie.

In response to CP:

The slide itself suggests that there is only a rough idea for the future stores and that they aren't "planned" yet. If the graphic designer made random assumptions about these locations or took artistic liberties, then I wouldn't be particularly bothered.

The # of projected stores seems promotional.

John, I hope you have better reasons to short this than a poorly designed chart in a presentation. FCF positive in 18 of the last 19 calendar years...

It may be thinly populated but consider for a moment the climate and how much skin cream would be required to rejuvenate your skin if you lived there.

Yak butter only goes so far.