Michelle Celarier is mistaken about her sources

This letter was highly market sensitive, and trading on it in advance would be insider trading under either the Stock Act or the Supreme Court decision in the R. Forster Winans case.

I have no evidence however that anybody traded. I only note the sensitivity of the letter.

This caused a minor stir in the Twittersphere. Witness this exchange between Josh Brown and Michelle Celarier. 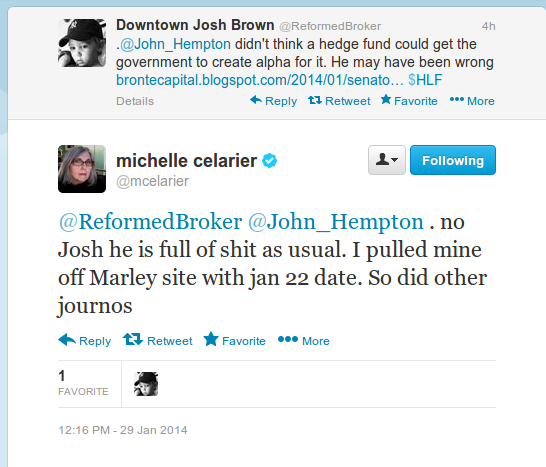 Previously Michelle Celarier insisted that she pulled the letters of Markey's website and that maybe Markey had updated them at some later stage:

As Michelle Celarier has called me "full of sh-t as usual" I feel the need to defend myself.

I note, other than the date, there is one substantive difference between the letters on Ackman's website and the one on Markey's website.

Here is the signature block on the Ackman-website letter:

Note that the signature is in grey.

And here is the signature block on the Markey-website letter.

Note that the signature block is in blue.

I have checked many letters on Senator Markey's website.

As far as I can tell he always signs in blue.

The conclusion I have is that the letter on the Ackman website is a scanned letter.

This conclusion is confirmed by looking at other details. The Ackman-website letter for instance renders Edward Markey's letterhead unreadable: 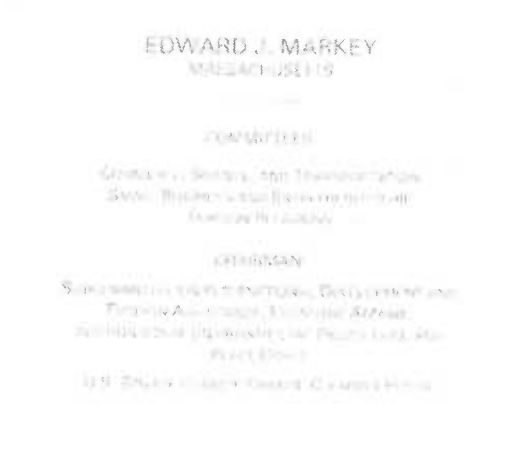 (The picture really is that faint.)

By contrast the Markey letter has a readable letterhead: 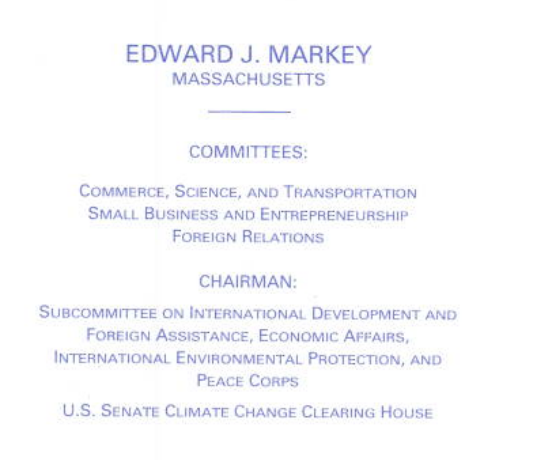 The document properties are also different. The Markey version was produced on a Hewlett Packard MFP. 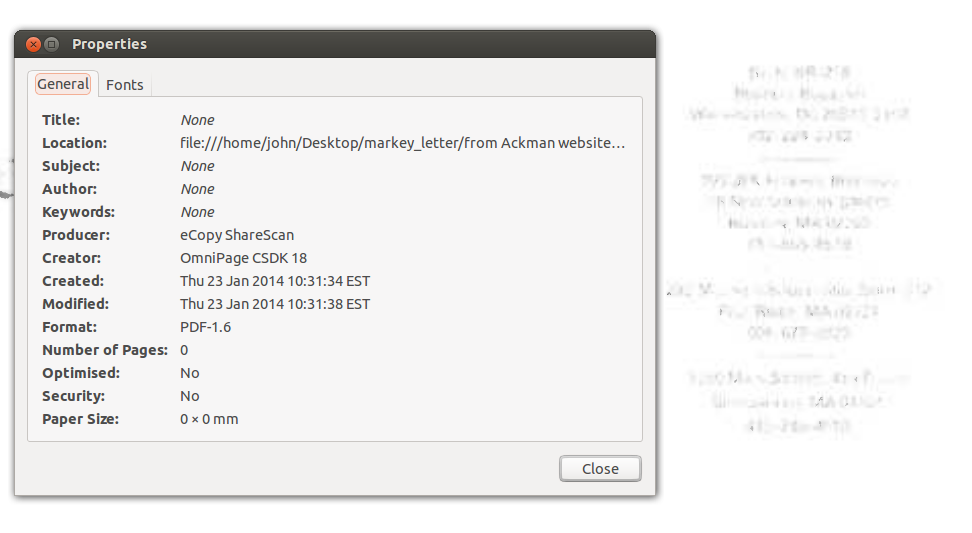 The letter put up by the New York Post was not the original letter. It was a scanned letter. It was also produced on an eCopy ShareScan and it has the same legibility issues as the Ackman-website letter.

Michelle Celarier is likely mistaken about where she got the letter from.

An update is warranted: Google Cache clearly shows a letter dated January 22 was at one stage on Senator Markey's website. 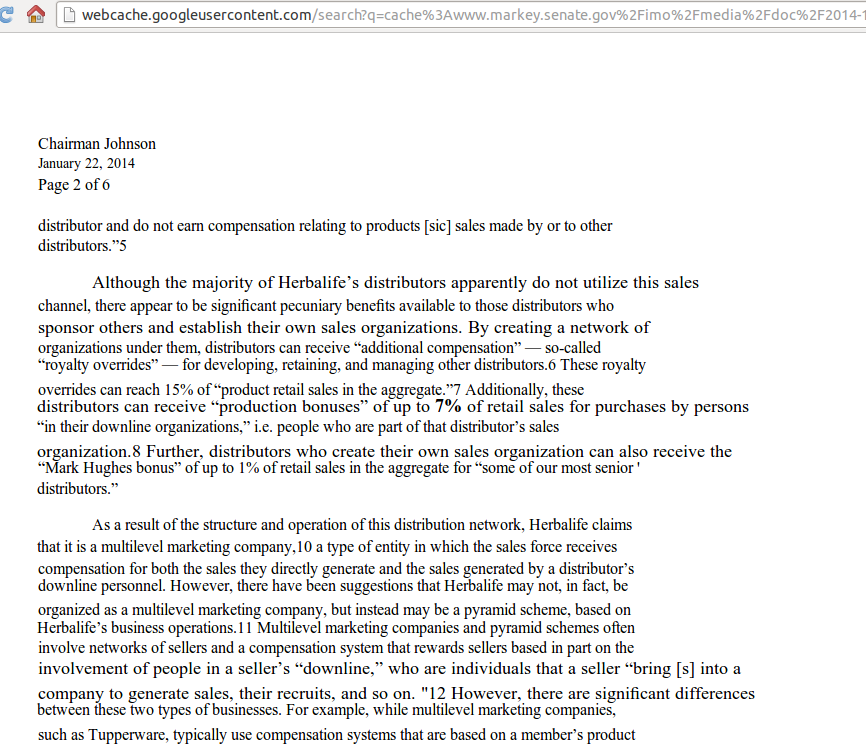 However this does not obviate the fact that Michelle Celarier's copy of the letter was a scanned copy with Pershing Square consistent metadata. However it does remove some suspicion as to timing of receipt of the copy.

I am in awe of your diligence skills. Hats off to you John.

time to annoy the hell out of M.C. on twitter... still no response from Markey on the payment details...might have to ask the Kennedy Clan.....

this is why I admire you John.

I think you are correct in the source of the letter. I downloaded the pdf that is linked from the NYP article off of Scribd. I use Foxit Reader and it shows the author as "copier@persq.com"

I think you are correct in the source of the letter. The NYP has a link to the letter on Scribd. I downloaded that file (which Scribd states was published by the NYP) and when I view properties it shows the author as "copier@persq.com". (I use FoxIt Reader to view PDFs...)

I think I can add one final nail to Celarier's coffin.

This link has a 1/22 version, in blue, printed by Hewlett Packard MFP. http://www.streetinsider.com/Short+Sales/Herbalife+Ltd.+%28HLF%29+Stock+Under+Pressure%3B+Sen.+Markey+Asks+for+Probe/9081248.html

I think this confirms that Ackman / Factsaboutherbalife used a scanned version, probably concerned about whatever metadata might be in the pdf... Oops!

Also, perhaps they were emailed a copy directly, so didn't know if that version would be the same as would be posted. Otherwise, why go through the trouble of printing and scanning?

That's why the scanner/copier here at BuyersStrike! HQ is set to "SecretDesertFacility@NSA.gov".

Getting serious, I do feel bad for this Shane Dineen. The only thing that could make me laugh harder is if he became an analyst at Bronte Capital

Make it happen! He did nothing wrong.

Interesting that the author (copier@...) metadata was removed from 1 of the 3 documents. Does that indicate some intent to conceal the source?

Embarrassing for sure. It is reasonable that an interested party would send documents to a reporter. But then why not just send a link? Why use this copy? The most plausible scenario is ugly.

This is pretty funny as a story. But the only thing I would note is that some scanners treat handwritten text by turning it blue. That is using the current up to date major bank MFD/printer thing.

I sign all my doc's in black, but when I scan them in for emailing, the handwritten signature/text comes up blue. Could this somehow be the explanation?

The letters are two different versions, as the signature has very slightly different placing (although the sign itself is identical, which seems to imply gif inserted into a word doc or something similar, but one space extr).

It's crazy that people use PDFs. Given metadata risks, surely a JPEG would be safer (metadata is much easier to kill and edit in JPEGs, through tools such as EXIFER). You'd think if you were going to do something illegal, you would try not to be stupid. When I scan docs, I never use the default PDF format. Proprietary formats mean you don't control your data - I have real difficulty opening MSWord files I created in 1988.

Great diligence Mr. Hempton. Someone should get hammered for this.