When I get researching a company I have been known to read very old filings just to see how business has changed over time. In a case like Alliance Resource Partners this is critical. ARLP is by-far the best performed coal mining company in America and it has had the same management team since the late 1990s. The changes since that time have all be wrought by management and circumstance.

This company's record is so extraordinary that it is worth understanding it in a very long term manner.

So I started with the oldest Alliance Resources 10-K in the SEC database. 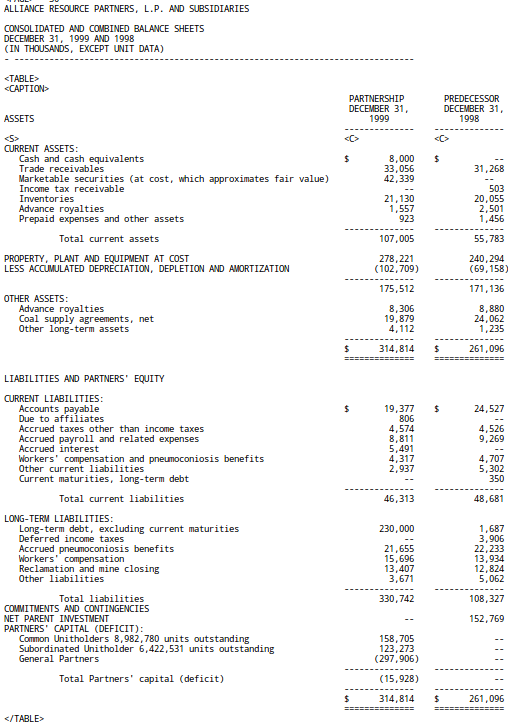 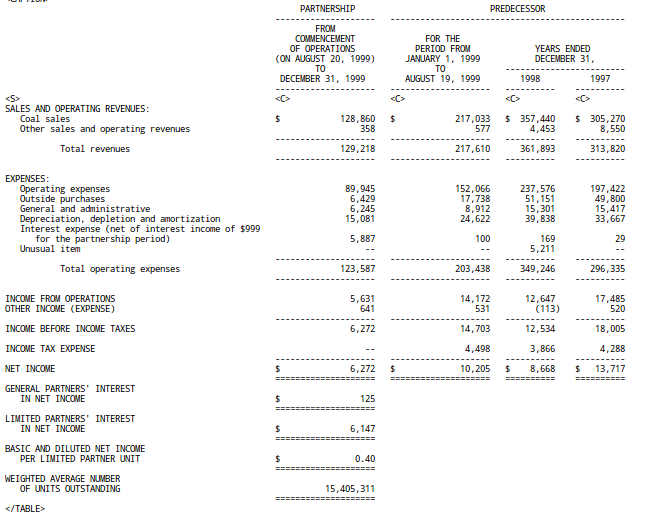 You will see that gross plant and equipment was $278 million with $103 million of accumulated depreciation.

Here is the production data as given from the same form 10-K.

The above mentioned 10-K gave us some operating data as well: 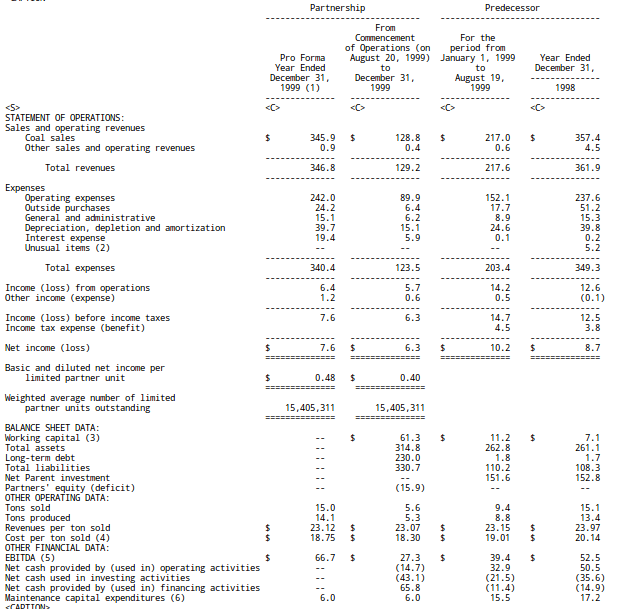 In those days revenue per ton of coal was $23.12 and costs per ton was $18.75. The margin was just under $6 per ton. Maintenance capital expenditure was $6 million - or about 43c per ton of coal produced.

Depreciation, depletion and amortization was $39.7 million or $2.82 per ton.

We have approximately 1,360 employees, including 100 corporate employees and 1,260 employees involved in active mining operations. Our work-force is entirely union-free. Relations with our employees are generally good, and there have been no recent work stoppages or union organizing campaigns among our employees.

To see the changes wrought we need to compare to the latest 10-K.

Here is the most recent balance sheet:

And here is the most recent P&L statement:

And here is the production data:

Note that the (high value) low sulfur coal has declined in both relative and absolute terms and this has become almost entirely a high-sulfur coal company company dependent on plants with sulfur scrubbers.

The most profound change is just how capital intensive this business has become. The company has now employed $2,362 million in gross property, plant and equipment with accumulated depreciation of 823 million.

Bluntly - the amount of capital employed here has risen enormously. The gross property, plant and equipment per ton of coal produced is now $67.87 - up a long way from $19.70 per ton.

Here are the employee numbers from the last form 10-K:


To conduct our operations, as of February 1, 2013, we employed 4,345 full-time employees, including 4,091 employees involved in active mining operations, 86 employees in other operations, and 168 corporate employees. Our work force is entirely union-free. We believe that relations with our employees are generally good.

From this we see what I think is the most unusual thing about all the giant capital spend at Alliance Resource Partners. The huge capital equipment spend has not improved labor productivity. Production is now 8009 tons per employee per year - and about 8500 tons per mining employee per year.

Despite all that capital equipment spend labor productivity has dropped by more than 20 percent. Strange.

Moreover the non-mine employees have risen from to 100 to 254 - a rise somewhat faster than the total production has grown. Labor productivity has dropped and the company has become more bureaucratic white-collar heavy.

The company also publishes a long list of operating metrics in the 10-K.

That is an 18 fold increase in maintenance requirements per ton produced per year.

An unmitigated record of operational failure

This is very puzzling indeed. Financially this is the best performed coal operation in North America - the stock price is near the all time high. The distributions paid by this MLP are large and increasing. People sing the praises of this management team (particularly on Seeking Alpha but also in the comments on my blog).

But the operational facts on the ground tell a radically different story. This management team demonstrate unparalleled operational failure. The company has radically increased its capital expenditure - and the capital intensity of the business has gone up roughly 350 percent. This is a big-spending management team.

Despite that (and despite their non-unionized workforce) labor productivity has dropped more than 20 percent. And the workforce has become more bureaucratic.

On an operational level this is seemingly the worst run mining operation in the United States (and I am including the bankrupt Patriot Coal). And yet the company has had unparalleled financial success.

Why this might be is the subject of a few more posts.

Declining productivity and increased capital intensity in a mining company are not necessarily the result of poor management. You can only come to that conclusion if you make the assumption that their reserves and resources are totally uniform. I don't know Alliance but most older mining businesses end up working the deeper/peripheral parts of their reserves, with significantly different extraction economics. So there is a chance that management could actually be doing a great job given the grade and depth of their current resources compared to history.

I agree - they may have a stuff resource... I should correct - But hey - if they have a stuffed resource then they are also unlikely to be the best performing coal mining company in America.

So it is still something else.

their op margin per ton in the last 4 years has been 40%, 40%, 46% and 46% -- these are not just neat numbers; they are also dramatically rising numbers; from which I conclude that their customers are idiots and their competitors inept fools. another conclusion is that their coal is intellectual-property protected high-tech coal with intuitive user interface and a really responsive touch-screen

Ah, yes, the old capitalizing expenses routine--a classic accounting ploy. . . Thanks for writing this up, JH.

Declining capital efficiency for resources companies from 1999 to 2012 is hardly surprising. Just a correlary of the commodity boom that occured in the period - hard to base a short case just on that. Examples:

CVX, another well run company has that metric up 2.9x during the same period.

Alliance up 3.6x so higher but not orders of magnitude. The 1999-2008 period saw not only a large boom in commodity prices (be it oil or coal), but the capital costs to get these out of the ground...

John,
as other commented, I believe the rising cap expenditure going up is to be expected (and I blame Australia! :) ). That said, mining companies should be fairly comparable - you're digging up commodity and shipping it off, so managing the costs (even if they are rising due to factors outside of your control) is key. I don't know how they compare on costs/productivity with other US miners (and don't have time to do so, but assume you did), but if the metrics are more or less the same, someone is cooking with gas, not coal.

You should talk dirty more often.

And now for something completely different. Thank you for the many awesome blog posts over the years, John. I came across this link to a beautiful home near Bronte Beach on a design blog that I was following right after reading your last article. Sharing the serendipity: http://www.contemporist.com/2013/03/12/hewlett-house-by-mpr-design-group

Look at the metrics for JOY Global and Bucyrus. The capital inflation in this industry has been well publicized -- much higher than CPI.

Plus, all these coal mines have a lot more regulatory capex (safety, environmental) than they did 10 years ago.

The drop in labor productivity is the most surprising part to me -- higher than I had expected. That said, productivity in the entire coal industry has been dropping for a number of years... (early 2000s?)

I think I worked out WHY the operating margin per ton HAS to rise:

1. assume that your business model calls for eternally rising profits (i.e. the show blows up if the music stops playing)

2. assume further that you are not realistically able to fake your dollar sales (because you only have 10 clients of whom all are public entities) and

3. that you are unable to fake the tons (because they belong to someone else to whom you pay royalties)

THEN IT FOLLOWS that THE ONLY WAY you can show rising profits is by showing rising operating margin per ton.

and hence, presto, the ARLP operating margin rises from peer high of 40% to astronomical 46%.

the problem is... what next? you have already shown 46% operating profit per ton twice in a row... the business model calls for another rise this year. are you going to report a 54% operating margin per ton?

or are you going to do something creative? perhaps... buy someone in a humongously accretive transaction.

(incidentally, when did you say ARLP runs into loan their covenants?)

They look like an Australian coal operation. They are simply relying on price pressure to keep themselves profitable. It's a dangerous game, as we've discovered, particularly with the rubbish they are mining. Their management team seems to have been focussed on sales, and ramping up production into those contracts. If the contracts fall over they will lock the gates.

I may sound stupid here, but if you cannot fake your sales and purchases (see post 2:53 AM), how do you raise the operating profit margin?
All I can imagine is that all future oriented costs are not or incompletely booked (environmental, maintenance, water treatment, retirement obligations, ...).
Every cents of investment is spend to achieve higher volume, and all other costs are ignored.
The chairman and main shareholder of AHGP is Craft J III, a billionaire. Many billionaires in commodities achieved it by consuming the common goods.