Focus Media makes a lot of revenue per screen compared to US Television.

Many people in the comments to the last post worked out rough ratios. There are at Focus Media roughly 130 thousand screens (more now, less at the beginning of the year) generating 221 million in revenue in the last six months (see press release).

In the fourth quarter of last year the revenue from LCD screens was 150.4 million. There were about 120 thousand screens average over the quarter. Annualized that is almost $5000 revenue per screen.

Television advertising revenue in the US is about $72 billion.

Revenue per screen is roughly $235.

Almost (but note entirely) everyone I have shown this to thinks that the revenue-per-screen at Focus Media seems high. [That includes many industry insiders.]

Overstated revenue per screen is consistent with interpretation (c) as per this post.

It seemed to some people unfair to compare advertising in lift wells (which sometimes 20 people are forced to watch) with the TV in your kitchen (which may be on in background with one person or nobody watching). Some people thought I should compare with other out-of-home advertising companies.

The problem is that not all screens are born equal.

Screens are more valuable where rich people with high disposable income congregate. That are even more valuable if viewers have a willingness to spend that income.

They are more valuable where you are forced to wait (and hence watch the screen).

Probably the single most valuable screens are in airports. Airports are full of relatively well-to-do-people. They are also full of shops with fatter than average margins. People are forced to wait. Often they are travelling and extremely willing to spend on hotels, tourist attractions, luxury goods. Some even have expense accounts.

One comparable is Air Media - who probably have the best-placed screens in China - they dominate the airport space.

One part of that business is directly comparable to Focus Media. It has 42 inch panels which intersperse advertisements and content in airport waiting areas as per this quote from the annual:


We strategically place our digital TV screens in high-traffic areas of airports such as departure halls, security check areas, boarding gates, baggage claim areas and arrival halls, where there tend to be significant waiting time. A majority of our standard digital TV screens are 42-inch plasma display panels or LCDs. As of March 1, 2012, we operated approximately 2,690 digital TV screens in 36 airports in China under various concession rights contracts. These 36 airports accounted for approximately 81% of the total air travelers in China in 2011, according to the General Administration of Civil Aviation of China.

That business generated 21.9 million dollars in revenue in the last year. That is just over $8000 per screen - or more than double Focus Media. However these screens are at least 4 times the size of Focus Media screens and have many times the views.

Bluntly: these are optimally placed large screens. Amongst locations in China really. 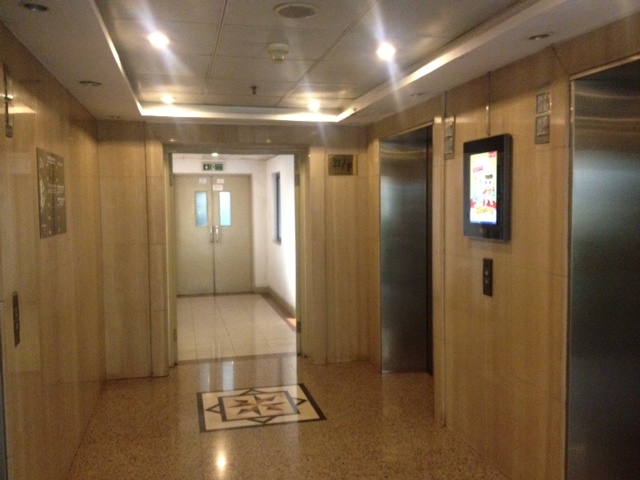 It has the usual number of people watching it. (Nobody...)

They are in lobbies of residential buildings in third-tier cities - where people watch them before they  go back to their apartment rather than before they shop.

I work on the 21st floor of an office building in Sydney. It is unlikely that more than 20 people per hour catch the elevator at this floor. (That still makes the lobby busy...)

Work on 9 hours per day, 275 days per year, and you get about 50 thousand impressions per year.

The cost per thousand impressions for a Superbowl advertisement is about $35 (probably less). At Superbowl rates this screen would garner roughly $1500 revenue per annum.

If the revenue really is over $3000 a screen I doubt it is sustainable.

Being a cynical fellow I keep getting drawn back to interpretation C in this post.

PS. Air Media revenue per screen has been falling. I have talked to several people in the industry and they all say the same things. Revenue is growing but only because number of screens is growing. The pricing pressure in this industry is down simply because there are increasing numbers of screens.

If a screen is mounted in a basement and no one is around to hear it, does it make a sound?

Having worked for a major display manufacturer and sold into the global airport market - I have no question that the numbers you listed for Air Media are high - and declining. While an airport concession often provides superior pricing power for obvious reasons - the onerous concession fees keep the margins in check. The business is no where near as profitable as it was even 3 years ago - I recall when a '42 LCD was $4000usd, digital advertising was a novel idea and the rate card reflected that. Purely anecdotal, but I would view the Focus Media numbers with the same confidence that I have in the inflation numbers of the Argentine government under "Queen Christina".

Hate to be the pedant, but re-read the first sentence of your fourth paragraph.

Oh and I was working a similar line, but it appears you got to it first. Great minds...

One other issue to consider is that whilst it is a company which makes cosmetics or cars or whatever that pays for the advertising, is is an advertising agency which buys the ad time from FMCN and which (presumably) receives a rebate from FMCN. The ad agency also plans the ad campaign and tells its clients where to advertise. And whilst ad agencies and their clients see the screens in the high profile locations, they don't see and maybe don't realise they are paying for ads on screens in the basement.

I think your analysis is pretty spot on. Having lived in China for ages I've seen the rise and fall of Focus Media screens, everywhere, including the office building that i was working in.

I could add to the discussion a little i think. The content of these forced advertisement is in many ways a thermometer of the economy. Four five years ago, it was flooded with real estate ads, luxury spas, overseas holidays, italian cars, that sort of things, ambitious, ridiculously expensive, and, positive.

Not that i'm saying shampoo ads doesn't generate as much cash, it may do. But it's horrible to watch, and it almost stops you from buying that shampoo. It creates such a negative response from its viewers that people almost always stare at their phone instead of at the screens.

It's about the least effective way of advertising and those who are stubbornly sticking to it are the consumable brands such as soft drinks, well especially soft drinks.

You are the expert on this sort of data mining, but my gut feeling is that the advertisement fees of these companies are leaning towards on tv, and online video screens, because let's face it we are all geeks who stay at home and watch soap.

Whereas lift screens has a social connotation: that you work in a high rise modern building, that you are visiting a multistorey restaurant, that you are spending money in a hotel......many people do that, but not THAT many.

What do you think about Eastspring demanding $30 now on the buyout? Could it be a play to stop the stock from collapsing if the buyout fails? ...i.e., by giving a reason other than the accounts for the deal not closing.

Nice series of posts John. Its very very difficult to follow the evidence, it's far easier to jump to conclusions.
FMCN certainly looks like a fraud, revenue per screen certainly looks too high. But its a nice progression of posts to see you avoid drawing a firm conclusion without firm evidence.

John, I am a long-time reader and first-time commenter. Always enjoy your posts and have found the Focus Media series particularly interesting.

This last question of comparing revenue per screen in out-of-home media vs TV media, however, falls somewhat into my area of expertise and I am not sure this comparison makes sense.

The key drivers of advertising rates (and therefore revenues) are reach and frequency, e.g. how many people does this ad reach and how often does it reach them.

Surely there are more relevant comparisons to be drawn from the per-screen revenues of other out-of-home media businesses e.g. JC Decaux, Adshel, Oohmedia, Eye etc etc.

These businesses would provide a much better benchmark.

But JC Decaux is operating in US, Europe etc which you would expect to command much higher ad rates than China. Also JC Decaux's street furniture panels are presumably much bigger and more high impact (and have higher reach) than Focus Media's little posters in lift lobbies.

So this would suggest that Focus Media's $3000 usd per screen is either fictional or at best unsustainably high.

Don't forget, this is China. You need to multiply by 2 or 4 to get the equal number of impressions. But then you compensated that number by giving Superbowl rate.

Also, I notice that the FMCN screen in the pictures looked pretty large, much larger than the 17" screens you repeated.

So maybe the FMCN might just inflated the revenue by just a wee bit?

It occurs to me that potential explanation for the high revenue per screen could be that the revenue is real (ie the advertisers really are paying those rates) but the cash is then being given back as kickbacks to whoever commissions the ads? Plus bit for the FM management of course. This would mean the cash on the books wasn't real, hence the need to buy and sell the (possibly) imaginary businesses to wipe out the cash with losses?

Digital out of home ad networks (other than theaters, airports, and toilets) are terrible businesses (I spent months analyzing the sector on behalf of a multi billion dollar media company). As you previously noted, globally no one has managed to make the model work. Focus Media's apparent success defies logic and the transactions you identified further bolster my belief that something here is off.