Northern Oil has its defenders and the defenders tend to point to one thing only – the value of Northern Oil's acreage.  After all you would never buy Northern Oil based on its current revenue or its current profit.  Here are the quarterly numbers (you will need to click for full detail): 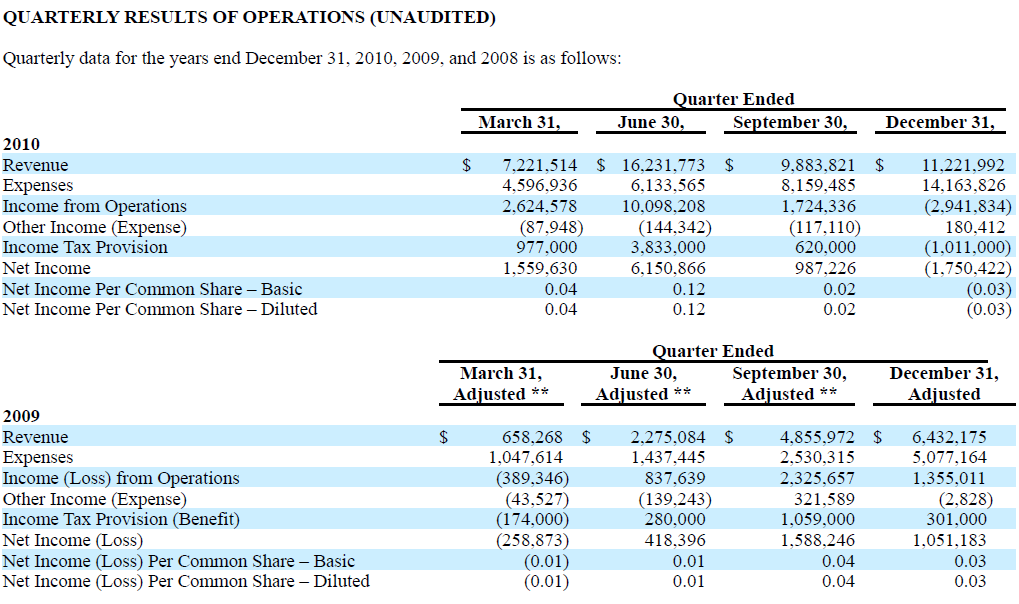 (The company notes the 3c per share loss in the fourth quarter was after oil hedging losses.  The loss was also after an extra depletion charge.)

Anyway its pretty hard to justify Northern Oils $1.6 billion market cap based on these quarterly numbers.  We are talking approximately 35 times revenue – and well over 100 times earnings (on their numbers – numbers which I believe are inflated).

To justify the market cap you need to assume that soon-to-be-developed acreage is worth a fortune.  And the defenders do just that.  For example Canacord Genuity (a major promoter) in its daily note (23 March 2011) led with this:

We are reiterating our BUY rating and thesis based on Northern Oil’s acreage quality and relative growth potential. The company's core competency is lease acquisition, and we remain encouraged by its ability to accelerate acreage acquisition and development activities. In our view, the recent bearish sentiment and associated sell-off are overdone. We remain very comfortable with our assessment of the Bakken, oil and gas accounting and Northern Oil’s valuation. We view this weakness as a buying opportunity given precedent transactions and the company’s proven ability to organically acquire acreage at accretive levels.

From our constructive stance, we believe the bulls would argue that Northern Oil trades at a ~17% discount (EV/EBITDAX) to its closest peers (BEXP and OAS) and that the recent Linn Energy transaction (CXO/LINE valued at +$12,700 per acre, NOG valued at ~$8,600 per acre) more than underpins its fundamental valuation. The LINE and NOG metrics are adjusted for production at $100,000 per boepd. The bears point to depletion accounting and corporate governance concerns.  While oil and gas accounting is complex, we are very comfortable with our assessment of Northern’s business model, reserve accounting and oversight controls and balances.

The key here – which I highlighted – is that the company is only valued at $8,600 per acre compared to some recent transactions at $12.600 per acre.

That would be good if we were comparing apples with apples (or acres of identical quality).  We can however find a good scatter of acreage prices.  The Feburary 25 edition of Rocky Mountain Oil Journal gives a Bakken state of play.  This is what they said about North Dakota auctions by the State in 2011:

But hey – why use average auctions when we have Northern's own numbers?  When you read these numbers remember that well spacing is typically about 1 per 600 acres to 1 per thousand acres with the lesser spacing being more common.  Quoted from the 10K:


The following describes some of our larger acquisitions during the fourth quarter of 2010:

In December of 2010 we acquired approximately 1,748 net acres for $2,500 per net acre in Williams and McKenzie Counties of North Dakota. All of the acreage consists of non-operated tracts that are not subject to specific exploration or development agreements. Several operators have been permitting and drilling wells in close proximity to the acreage, and we expect development of our acreage will commence in 2011.

In December of 2010 we acquired a 50% working interest in approximately 14,538 net acres for total consideration of $1,737,483 in Richland County, Montana. Slawson will be operating the prospect and all drilling and future acquisition costs will be shared pro-rata with Slawson based upon our proportionate working interest in the prospect. This prospect is in close vicinity of Elm Coulee, and considered an extension of the Southwest Big Sky project, which is also operated by Slawson.

In December of 2010 we purchased 720 net acres from the Bureau of Land Management for $875 per net acre in Richland County, Montana. The acreage lies within a selected township that recently experienced a successful test well targeting the Bakken formation, but is not subject to specific exploration or development agreements.

Now the first acquisition (William McKenzie) is 1748 acres (two or three wells at standard spacing) at $2500 per acre.  These will be drilled this year - and they were purchased at about the mid-price for Bureau of Lands sales in 2010.  You would expect them to be ordinary acres. It is a bit adventurous the the stock market to value this at $8600 per acre but it is at least in line with industry norms.

But the second acquisition (Slawson Exploration Lambert Prospect) was very different.  It was a 50 percent interest in net 14,538 acres (call it 7269 acres net for Northern) for $1,737,483.  That is $239 an acre.  And they did not buy it from a dupe part - they bought it from Slawson who operates and will continue to operate those acres.  The operator was willing to sell these acres for $237.  It looks awful rich to value them at $8,600 per acre for these acres.

Wall Street capitalizes future earnings.  The price of a stock now is the market estimate of what cash it can generate for investors in the future.  Sometimes Wall Street is really dismal and the price of stocks is much lower than the value of the same businesses would sell for in a private transaction.  (That is when Warren Buffett likes to buy stocks.)  Sometimes Wall Street values stocks far more than independent industry transactions.  At that time businesses wanting to sell rush go to public.

Boone Pickens when he purchased oil stocks famously said that it was cheaper then to "drill for oil on the floor of the New York Stock Exchange" than it was to drill out in the field.

Northern Oil stock is the anti-Boone-Pickens transaction.  The company buys acreage at as low as $237 an acre and have the AMEX value it it at $8600 and have lots of Wall Street's Finest Analysts tell you that is cheap compared to comparable transactions.

Thanks - but I am still short.

I suppose there are some investors who would be willing to pay a slight premium for acreage with a known, successful, operator. Of course, I am not one of them.

But Northern Oil and Gas (NOG) is not an operator at all.

An investor putting a premium on non-operated acreage is a fool.

An investor putting a premium on non-operated acreage owned by a company like NOG, run by ex-stockbrokers is, kindly, a greater fool.

John,
you rae forgetting another thing. On Wall Street, all you need is a good story and anchor investors.

A good story and an anchor investor. That I am not forgetting.

Now check out the biggest shareholders.

all the good names are in this stock:

Ho ho ho , you just brought a knife to a gun fight.

NOG reminds me of IOC. Soros anchors the stock and burnt the shorts to a crisp.

"All the good names are in this stock"...hilarious. How quickly people forget that CV Starr being in CCME was supposed to be the justification for that company.

What, wall street analysts not being truthful? and not being great analysts? (gasp)

most of them are inherently biased. Why do you think there's so few Sell recommendations on the street?

let's reiterate the BUY, stop the bleeding...tell everyone we know to sell and then when oil goes down a bit, lower it to a HOLD. Everybody wins. HAha.

I don't know about this one. It's a bit of a turd, but I can see it running for some time yet. Really seems like it's the kind of stock you might use in a pair trade v. WLL or BEXP or one of NOG's other peers.

(Disclosure: bought deep ITM puts when your first post was up, but have since bought offsetting stock, which I'll sell if I want to be net short this name again.)

I'd like to know your thoughts on this John

It would be a real blow to the NOG short thesis if there were deals out there paying huge dollars for undeveloped acreage, so I was very interested to see the Canacord Genuity note which claimed that the CXO/LINE transaction valued acreage at $12,700 per acre.

Maybe Canacord Genuity is just a lot smarter than me, but I can’t figure out how they calculated the per acre valuation.

After looking at the LINE press release on the deal and the CXO 10K, it appears to me that LINE bought working interest and acreage that had 1,350 BOE/d of existing production and 8 million barrels of proved reserves, in addition to some undeveloped acreage for $196 million. The proved reserves had a PV-10 of $131 million at 12/31. With substantially higher oil prices, the PV-10 of the proved reserves would have been over $200 million at the time of the deal.

It appears to me that basically all of the purchase price in the CXO/LINE deal went towards buying the proved reserves and they didn’t pay much of anything for the undeveloped acreage.

That would certainly be consistent with my experience in the industry where we would pay up for proved producing reserves, we would pay a lot less for reserves behind pipe, we would only pay a little for PUDs, and only pennies for probable and possible reserves. Then again, I have been out of the industry for a number of years, and maybe they do things differently now.

It would be interesting to see an analysis of which pension funds have a history of being suckered into such stocks.

John, what is your preferred shorting strategy when confronted with a good short like NOG that has absurd stock borrow rates > 50% annual interest rate? Do you prefer to short the stock and pay the high borrow fees, or do you prefer a hybrid strategy like going short a very in-the-money call option?