Looming excess capacity in getting you smashed and Chinese statistics

A few years ago I travelled by local transport (mostly boats along the Mekong) from Saigon to Siem Riep. I traveled with my wife and my then seven year old son. Hotels ranged from about a dollar a night to 170 dollars a night. (We splurged at the Victoria Chau Doc which felt like the best hotel I had ever stayed in - but probably was only in contrast.)

We hired locals to show us what they did for fun - which largely revolved around cock-fighting and any other form of gambling they could find and moonshine. They even bred fighting fish for gambling.

I sipped (small amounts of) moonshine and watched Cambodian soldiers play poker and boules.* The soldiers left their machine guns in a pile whilst they gambled. They would not let me photograph them because they were on duty. (They had machine guns - so I went along with that request.)

The moonshine was bad. Really bad. Kill-people sort-of-bad. Drinking it in quantity would be like having your brain smashed around a gold brick and then twirled with some slightly rotten pineapple chunks. It told me that the real game in alcohol in developing countries is to get people off the (literally) poisonous once-distilled moonshine and get them onto double or triple distilled stuff that comes in bottles. The biggest selling liquor label in the world used to be Johnny Walker Red Label. Now it’s Bagpiper - a genuine Indian whiskey. Bagpiper is one of the few liquors I would argue saves lives. The alternative is moonshine and with regular and sometimes very large death-tolls.

In China they didn’t take to whiskey like the Indians. Instead they drink Baijiu. The alcohol is usually sold as a wholesale ingredient - and blended under lots of brand names. The commercially made (and multiple distilled) grain alcohols will be displacing moonshine for years to come. There is good quality growth there.

Which brings me to China New Borun (BORN). BORN is a controversial stock floated on the US exchange earlier this year. It had reputable brokers backing the IPO.  [The prospectus is part of my holiday reading!]

The prospectus tells us that edible alcohol is sold by grade (A, B, C) with A grade being more refined and hence tasting better. This company produces B and C grade with increasing focus on the B grade. Absolut Vodka it is not - but whatever - it is likely far better than the vat of rice and rotten pineapple by the Tonle Sap I tried. Here is what the company says about its production.

In China the numbers can bamboozle you - but I am not used to talking about 380 thousand tons of edible alcohol. That will supply an awful lot of drunks. I was trying to work out just how many - but the text of the prospectus does not make clear whether they are talking about metric tonnes or US short tons** as would be measured in America. (The spelling is different - so I would normally go with the spelling - except that China would measure this in metric and some diagrams later in the prospectus are specifically labelled as “metric tons”.)

And here is the diagram that was labelled “metric tons”. It purports to show edible alcohol consumption in China. They mean grain based stuff sold into the Baijiu market. 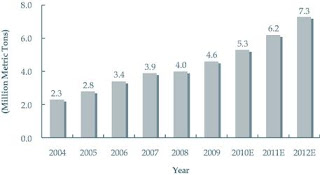 Lets take the 2012 estimate. 7.3 million tonnes of alcohol per annum. That is 7.3 billion kilograms of alcohol per annum. That is of course on top of the moonshine, wines, beers and imported spirits that the Chinese drink.  (The growth in this chart must be moonshine replacement.)  This is a lot of alcohol even for 1.3 billion people.  It is more alcohol than the Chinese drink according to WHO statistics.  Indeed it suggests that the Chinese are as drunk as the Russians (something that casual observation of culture makes you think is unlikely).

There is just over a quarter of a kilogram of alcohol in a (standard 700ml) bottle of Absolut Vodka. So this represents say 29 billion bottles of vodka. One company - China New Borun - is - according to its prospectus - responsible for about 1.2 billion of these bottles.

Of course all the consumption in this note - and China New Borun's capacity - represent 2012 estimates.  Maybe - like everything else in the world - the Chinese are building excess capacity in getting people pissed, legless, bladdered, trashed and otherwise off-the-wagon.

*The French left baguettes, boules and train-tracks. The train-tracks have since been converted to bamboo railways.
Posted by John Hempton at 3:30 PM

A lot of Chinese purchase Baijiu as a way of saving, just like wine collectors. Many Chinese families have bottles of Moutai or Wuliangye (two most popular brands) yet none in the family is alcoholic. The demand is probably even picking up recently as high-end Baijiu prices rise faster than inflation.

I suspect obvious bubbles can be identified from a valuation perspective among the listed Baijiu producers. And the underlying demand (Baijiu actually consumed) is likely way behind capacity. But as the bottles become an asset class for investment, it must be very difficult to tell when reality will eventually catch up.

The baijiu market in China is currently a fragmented and competitive one, with some 8,000 baijiu firms in China generating about 100 billion yuan in sales yearly.

About 200-300 of them are situated in the Henan province, where Trump Dragon is estimated to account for about five to six per cent of the market share.

However, both currently have a total production capacity of 90,000 tonnes of baijiu annually and 15,000 tonnes of grain alcohol and have been generating sales this year.

John, very enjoyable indeed. I have had such discussions, conversations and review before and it is great fun. I don't we have made money in 1/10 ....(so it is now painful) we need to be drunk on Baijiu to really invest in these watering holes

If you need volunteers for reading Chinese IPO stuff, count me in. This year we have seen ~40 of these on NASDAQ ...

As a thought: Can we do a TV show on CNBC or something else? Jay Leno-esque?

Time to import some LDS missionaries, me thinks.

Ask any Chinese national and you'll know that Chinese (especially business men/officials) are most wasteful in their alcohol. They buy to impress and alcohol is not really consumed but just poured around and thrown away after the dinner. Check the statistics on how much of alcohol is actually consumed and you'll see the true picture of Chinese consumption. I'd be inclined to think at least 30-40% of the alcohol purchased are wasted and not consumed.

Citron covered this one as well:
http://www.citronresearch.com/index.php/2010/11/15/china-new-borun-born-you-are-cold-busted-now-it-is-time-to-come-clean-the-smoking-gun/

I was born in Shanghai and I never thought Chinese drink much. However once you leave the coastal areas are enter in the country side, the level of alcohol consumption (particularly spirits) jumps astronomically.

Interesting note is that I had lunch with quite a few local government officials, besides driving BMWs they consume at least half a dozens of 700ml of bottles of spirits during lunch and dinner. The quality were pretty good, but they can afford to drink the good stuff since its the government picking up the tab.

Maybe the comment that the chinese drinks the like the russians is closer to the truth. But more likely in the inner regions rather than the coasts.

Just anecdotal, but I recently spent 5 weeks traveling in China and found that the Chinese don't really seem to be big on drinking, at least in contrast to other Asian nations such as Korea.
From my observations it seems as if the Chinese might purchase alcohol at dinner but don't tend to partake in late nights out at the bars.

On the 700 ml, 250ml issue it would have been clearer had I used 280ml and 40 percent alcohol. But the alcohol is by volume and the specific density of alcohol is only about 0.8 - so if anything there is even more vodka equivalent in those tons.

Spelling of Tonle Sap is corrected - thanks.

It is a very strange body of water.

Spelling of Tonle Sap is corrected - thanks.

It is a very strange body of water.

Would be interesting to compare with the Chinese text, in case it's a translation error. Perhaps they meant 7,3 billion tons of baijiu instead of 100% alcohol essence?

Learn your article from a friend. I do agree the Chinese statistics are not quite convincing. But I am curious about what you said-"They mean grain based stuff sold into the Baijiu market". I find some interesting figure about edible alcohol. Just in case if you are interested in what i found: According to 2008 figure in China, there are 51.3% of edible alcohol is for baijiu market, 47.2% for chemical industry and 1.5% for health and medical industries. In my view, only half of 7.3 metric tons are sold to baijiu market.

The prospectus does not state any of it goes to the medical market - and they state quite clearly they are trying to up the quality (ie taste) of their production to get a higher price.

Nonetheless I am pretty sure you are right - some of this goes to the medical market - probably quite a bit.

The astronomical growth is however moonshine replacement. There is similarly rapid growth in sales from the French liquor giants (Pernod Ricard etc) into China. The Moonshine replacement drives all the growth in India too - but there the supply is domestic (read Bagpiper).

Will give you a buzz in New Year.

Glad you agree with it.

You did not take into consideration exports? Are these not exported? Usually anything built in China with huge capacity seems to be for the export market.

Great stuff as usual, Mr. Hempton. I find it interesting that your commentators are (in the main) trying to explain this away instead of agreeing that there is something very fishy with the numbers. . .

Happy new year. You get a mention alongside such blogs as Krugermann and Team Macro Man

We chinese are very poor alcoholics. we are not even in top 25 countries ranked by per capita consumption of alcohol. this is because like opium which was once responsible for enslavement of china , alcohol is abhorred by the govt. As they say once bitten twice shy , our government has crushed alcohol consumption with an iron fist. However we do encourage alcohol exports :)