The ubiquity of Coca Cola

I was perusing the Post-Courier Online - a newspaper in Papua New Guinea. The cover story with picture is as follows: 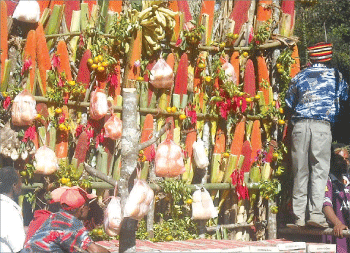 Neighbouring tribes in South Wahgi district of Western Highlands Province exchanged food at the weekend as they started negotiation to restore peace among themselves and end hostilities in their area. The Ngenika and Kisu tribes have realised that there was an increase in illegal activities in their communities and after much discussion, starting in 2007, the Kisu tribe gave 21 cows, red pandanus fruits (marita), 200 coke cartons, scone packets, sugarcane and bananas to the Ngenika tribe. They also slaughtered 100 pigs for their neighbours. Last year the Ngenika tribe gave 10 cows with the same amount of food to the Kisu.

200 Coke Cartons is part of the tribal peace offering between tribes in the Western Highlands of PNG. And you read about it on the internet.
This modern world is very strange.
Posted by John Hempton at 4:54 PM

Does this mean Coca-Cola (KO:NYSE) is a screaming buy today?

would like to hear more of your thoughts on aussie housing. report out today talking about the decline in permits. what is the disconnect: prices are high and holding as a percent on income, the press says there is a shortage of housing, but builders suggest there is little incentive to build. how can this be? are the costs of building the housing too high (fees, licences, materials, etc), or are the housing co's just acting as an oligopoly? just dont understand...

Associates first Capitol, I googled it and your blog came up. I am looking for current information. I understand they were bought out by Citi. So I can't understand why Associates First Capitol is trading again on the pink sheets. There has been no news releases and should'nt they be trading under the symbol C?

well done!! distract..distract.
we can't say anything on the internet becouse that almost all computers have --spywares--.
we must save our technics.NBA players more valuable than ours !!
I'm not Australian but have few Aussie citizens relatives and friends.their comments are..you have --dull country--??
all countries are unbalanced inthe world.unfortunately the Economy Science just primitive away !! rake Private Sectors..timid,egoist Public Sectors...ignorant Secret Services(sectors)....
go on..

I know how much you like Sheila Bair so here's a link where somebody else mentions her:

Coke has no yield, but pigs and cows do - namely piglets and calves.

Perhaps the tribes should negotiate piglet and calf swaps. On, y'know, notional herds.